Canada: Husky attacked by same illegal pit bull that attacked him in February

CANADA -- Poor Harley was attacked tonight by the same pit bull that attacked him last February.

*UPDATE* - Harley is doing much better after a rough night and morning. He is now able to walk with more weight on his leg. We had a decent walk this afternoon with very little limping.

Danielle Allin: Is he going to be o.k? 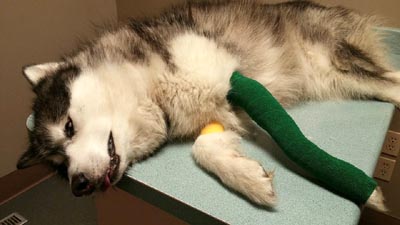 Debbie Ashton: Yes, fortunately no broken bones in his left arm but he does have 5 puncture wounds.

Debbie Ashton: the owner was there and he told me that Harley will be a little sore and that's all....nice try his dog is dangerous

Glen Hoban: The pitbull should be put down.
Debbie Ashton: the pitbull is illegal in our RM, found that out today

Debbie Ashton: the owner has a copy of the vet bill and now I am waiting to hear from the bi-law officer of our RM. I have to find another safer route to walk Harley

Anna Kolodka: Something needs to be done about the other dog otherwise it's going to keep attacking other dogs - the owner should know better 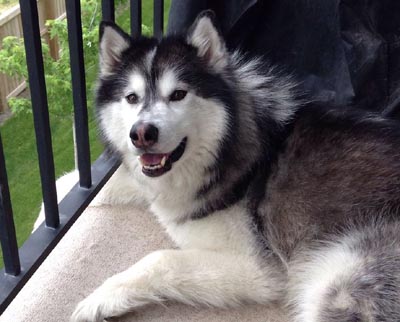 Debbie Ashton: Animal control of La Broquerie contacted me this morning. Turns out pit bulls are not allowed in our RM. The dogs are illegal, they have 2 pits. Shit is going to hit the fan.

Debbie Ashton: Animal control just left their place and the owner showed up at our door thinking that we had discussed the situation and everything is fine. He is annoyed that Animal Control is involved.

Michelle Woo: Clearly it is not fine. The owner doesn't want to take responsibility and was hoping paying the vet bills would keep their illegal pets under the radar. Jerks.

Debbie Ashton: we don't think he had any intentions of paying the vet bills, may have to take him to small claims court 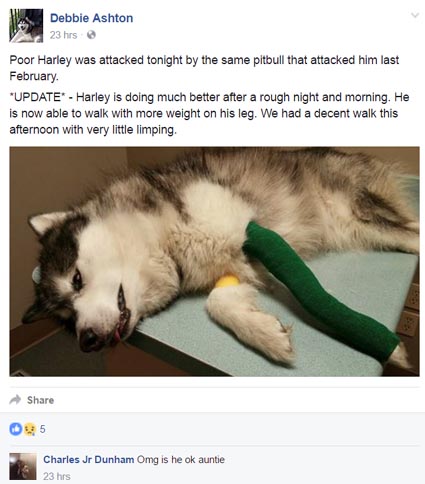