COLORADO -- Officer Jeff Bond with Craig Police Department was greeted with an unpleasant surprise when he knocked on the door of a Davis House apartment on School Street in the early hours of Saturday morning.

He and Officer Will Roland were responding to a domestic violence call around 2:30 a.m. — reportedly loud and suspected to be physical — but when the woman opened the door to her apartment, according to police notes, two adult pit bulls sprang out and attacked Bond.

The two dogs sank their teeth into his left arm and left hand. Bond already had his taser in hand in case a physical fight was still under way and was able to tase one dog, temporarily disabling it, Craig Police Commander Bill Leonard said. 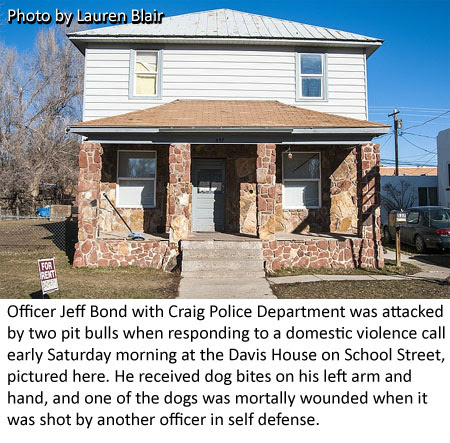 The other dog quickly turned to attack Roland, who, in an instant, drew his firearm and fired a single shot at the dog, severely wounding it.

“As I recall from watching the video, the approximate time from when the door opened until everything was done as far the dogs were concerned was five seconds or less. It was really fast,” said Craig Police Chief Walt Vanatta.

Additional police officers, Moffat County Sheriff’s Office and Colorado State Patrol responded to the scene, and Bond was transported to The Memorial Hospital. No stitches were required and he is expected to return to duty for his normal shift this week.

“He’s still sore obviously. The wounds will have to finish healing but are not enough to keep him away from work,” Vanatta said.

The pit bull that was shot was treated by a local veterinarian, but did not survive.

Neighbor Baden Whitehead had recently returned home from work when the incident took place, and said he heard officers knock at least twice and then kick the door in. He had known the dog that was shot; it belonged to the resident of the apartment, who was not involved in the dispute.

“The dog has no malicious instinct whatsoever, but when someone breaks down your door, they’re going to come after you,” Whitehead said. “The dog was just protecting its owner, but in my opinion, the police did nothing wrong, they did their job.”

The pit bull that had been tased ran away from the scene and was located later by Animal Control. It is currently being held until the courts determine the dog’s fate and whether it should be euthanized, Leonard said.

“Officer Roland’s reaction when the dog tried to attack him was almost instantaneous,” Vanatta said. “He had seen the dog attack one officer and then saw it coming for him and he was trying to protect himself, which is what I would expect him to do.”

Though all police officers are trained in techniques for dealing with aggressive dogs, the incident took place too quickly and suddenly for the officers to apply those techniques in this case, Vanatta said.

A use-of-force review board will investigate the incident per department policy, which is required any time officers use a firearm outside of training, recreation or for euthanizing injured wildlife on roadsides.

The woman, 28-year-old Sheena Gipson, was arrested on charges of alleged domestic violence, third-degree and second-degree assault, and unlawful ownership of a dangerous dog.

The man, 28-year-old Russell Cole Billings, jumped out a window as officers were arriving. He was apprehended within a couple hours with a cut to his face caused by his window exit, which required stitches. He was arrested for allegedly obstructing a peace officer.