CANADA -- A six-year-old Windsor girl nearly lost an eye and required surgery, including 125 stitches, after being mauled by a dog during a weekend sleepover.

“It was horrific, I walked into a nightmare,” Pam Robertson, the girl’s grandmother, told the Star Thursday. “She was holding the right side of her face on with a towel. She had a towel wrapped around her leg. When I walked in, it really looked like Freddy Krueger had just swiped her face.” 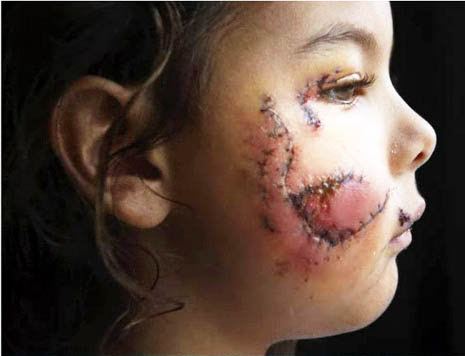 The dog, which Robertson described as a pit bull, attacked Karma Jariett Saturday night after she was dropped off at a friend’s house in the 900 block of Randolph Avenue.

Bill Tetler, manager of bylaw enforcement for the City of Windsor, said his department is investigating but he wouldn’t give any details. The city and province both have legislation banning the ownership of pit bulls born after 2004.

“We are aware of what transpired this past weekend,” said Tetler. “We received the report from Windsor police and we have an open investigation at this time.”

The city wouldn’t say Thursday if the dog was seized or confirm if it is a pit bull.

A dog could be heard barking inside the Randolph Avenue house Thursday afternoon. A man who said he lived there refused to comment. 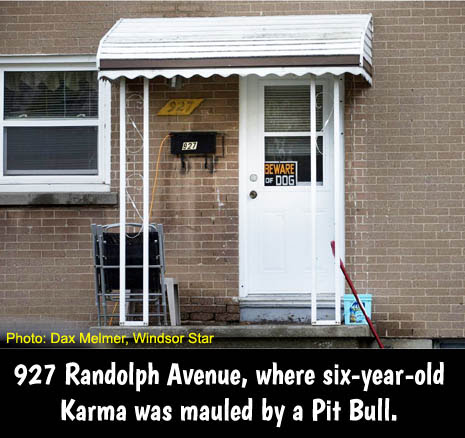 “Get the (expletive) off my property,” he said. “If I see you back here there will be consequences.”

Robertson said she dropped Karma off at the house around 7 p.m. At 7:50 p.m., her phone rang. There was a problem. Robertson, who lives just around the corner, raced over to the house.

Karma was on the couch with blood pouring from the torn flesh on her face.

“We were playing and then one of the other dogs came, like another dog that somebody was dropping off, and it was staying there for a little bit,” Karma, just home from the hospital, said Thursday.

“Then they were fighting and I was trying to stop the dogs.”

She said the dog that lives at the house turned on her.

“The dog came at me and just bit me,” said Karma. “He just jumped at me and bit my face.” 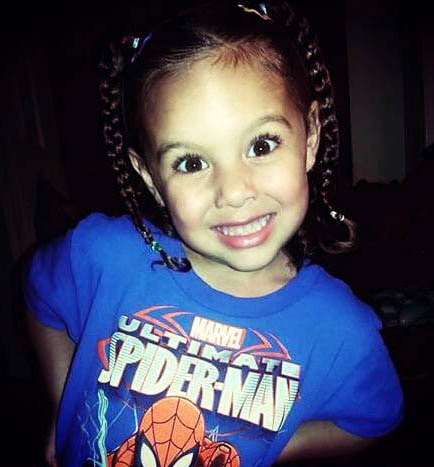 She said an adult in the house tried to “punch the dog away.”

“Then the dog bit my leg,” said Karma.

Somebody had called 911. Robertson wrapped her arms around Karma and told them to call again. She said a couple more people walked in and started screaming.

She said paramedics arrived and treated her in the ambulance before taking Karma to the Ouellette campus of Windsor Regional Hospital. 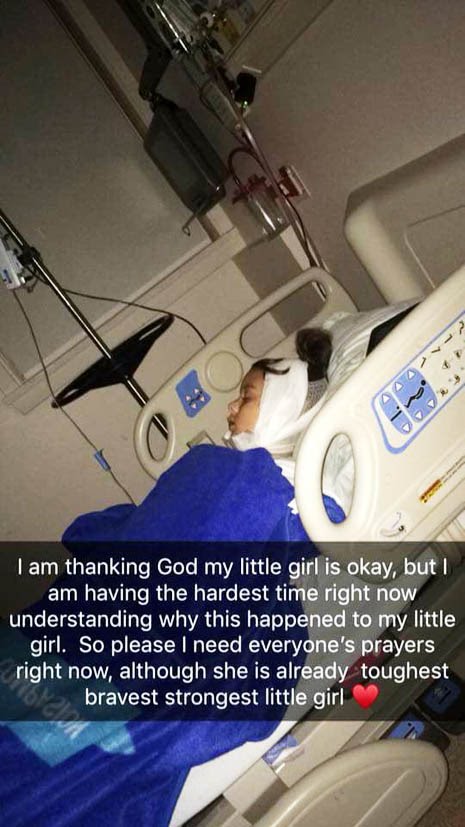 The hospital called in a plastic surgeon. They tried to do surgery but Karma started coughing so badly that doctors were worried she might vomit. Given the risk of choking, they stopped.

Karma was transferred around 3 a.m. to the Met campus. They cleaned and wrapped the wounds and kept her medicated. Robertson said they also gave her antibiotics and started with rabies treatment because the Pit Bull hasn’t had its shots.

“It’s so senseless and avoidable and tragic, it’s ridiculous,” she said.

Karma finally went into surgery Sunday afternoon. It lasted about two-and-a-half hours. The doctor emerged from surgery to tell the family Karma will be OK, but she has 75 stitches in her face. Robertson said there will likely be some scarring from the deepest wounds on her face. There are also 50 more stitches in her leg. 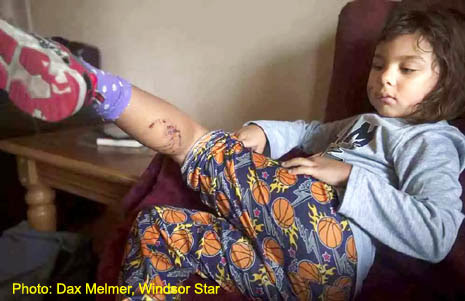 “What I didn’t realize was the teeth went in and pulled back on the top and the bottom on her calf,” said Robertson. “He ripped a whole flap, the whole top part of her calf, off. I could see her calf muscle.”

She said thinking about running into that house and seeing her wounded granddaughter still leaves her “weak in the knees.”

“I just hate to see her hurting, when she looked at her face for the first time and she cried and she was scared,” said Robertson. “She was already thinking ahead, like, ‘when I go back to school the kids are going to make fun of me.’

"She’s so beautiful — her personality, her soul, who she is, how animated she is. She’s constantly curious. She’s so far beyond her years, she’s so intelligent. From the first moment I saw her and put her in my arms, I knew I’d meet death before I let her face harm.” 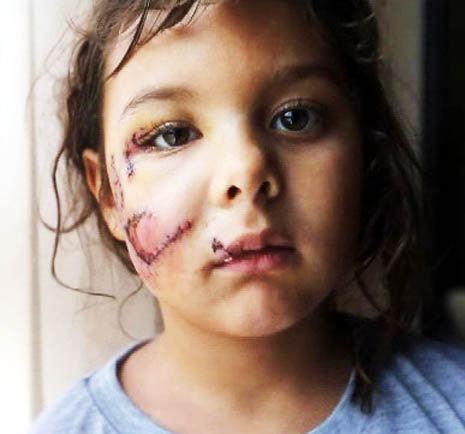