FLORIDA -- A Naples woman is accused of shooting and killing her boyfriend's pregnant dog during an argument.

Kelly Gresham, 43, of the 10000 block of Laakso, got into a verbal argument with her boyfriend Sunday during an evening out with four friends.

According to the arrest report, Gresham had several mixed alcoholic beverages. Gresham and her boyfriend began arguing, so the group decided to leave together. 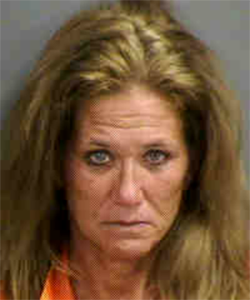 During the ride to Gresham's home, Gresham reached from behind the driver's seat and took the keys from the ignition. She then began punching her boyfriend in the face. Her friends were able to calm her so that they could continue the ride home.

Once home, Gresham proceeded to the bedroom where she said to the boyfriend, "You wanna hear something funny?" Gresham then shot and killed the boyfriend's pregnant pit bull, according to the arrest report.

Gresham was arrested by Collier deputies and faces a felony charges of cruelty to animals, possession of firearm with ammo, shooting missile into dwelling building and a misdemeanor of domestic violence.

Gresham's criminal history revealed that she is a convicted felon.