OHIO -- A Rootstown woman is recovering at home after she and her dog were attacked Friday on Greenwood Road by two pit bulls.

The dog, a 2-year-old, 35-pound cocker spaniel named Lucky, was fatally injured and had to be euthanized, his owner said. The Portage County Dog Warden’s Office is investigating and considering charges, a deputy dog warden said. 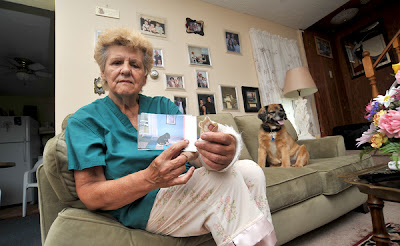 The victim, Marie Hustead, said Monday she was out in her yard at about 7:30 a.m. Friday walking Lucky when she noticed two pit bulls across the street — each about 60 to 70 pounds, she estimated.

Hustead, 70, said she turned her back on Lucky for just a moment. Turning back, she said the pit bulls “both had grabbed him” and were “just mauling him.”

Hustead said she was “screaming like a crazy person, ‘They’re killing my dog, help him!’” as the pit bulls attacked. Going to Lucky’s aid was when Hustead received injuries to her hands and arm from the attacking animals

“I started grabbing for my dog, not thinking. I had no weapons, it was stupid of me,” she said.

She said she ran inside her home and got a swivel sweeper as a weapon, but it fell apart as soon as she took a swing at the attacking dogs. If it weren’t for a neighbor, Vicky Spriggel, who grabbed a log and shooed the dogs away, her injuries might have been more serious, Hustead said.

“The only reason they stopped attacking was because of Vicky,” she said. “I was screaming, losing my mind for about five minutes.”

Another neighbor came outside moments later with a gun, but the pit bulls had fled back to their home in the 4700 block of Greenwood Road, eight or nine houses away, Hustead said.

Hustead estimated she now has between “20 and 40” stitches in her hands and left arm. A neighbor took Lucky to a veterinary hospital, where he was put on a ventilator.