And she has an imminent death sentence.

Just when is not certain. 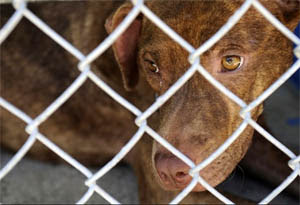 The pit bull mix that authorities say tore 11-year-old Brandon Williams' ears from his head during an Aug. 3 attack will remain quarantined at the Newport Animal Shelter until a judge approves its euthanization, authorities said Tuesday.

"We're holding it, pending on the court case," said Brandy Hensley, director of the shelter off Humane Way in Newport. "When we take a dog in, we have to hold the animal until the judge signs off to put it down."

Brandon was mauled by the female and a large black male dog outside a home on Branch Drive in Newport as he carried a wrongly delivered UPS package to a neighbor's home. The fifth-grader spent a week at the University of Tennessee Medical Center where he underwent reconstructive surgery in an attempt to reattach his ears, which doctors could not save. Doctors also performed surgery on his neck, leg and arm.

Cocke County Sheriff's Office deputies said the dogs were owned by Jennifer R. Switzer, 21, and Anthony L. Lugar, 22, who were arrested on charges of allowing animals to run at large.

Both defendants, free Tuesday on $15,000 bond, were initially set to appear before General Sessions Judge John Bell on a preliminary hearing Aug. 29. But Fourth Judicial District Circuit Assistant Public Defender Brad Davidson said that during an arraignment last week he waived both their respective cases to a Cocke County grand jury that is slated to meet this fall. 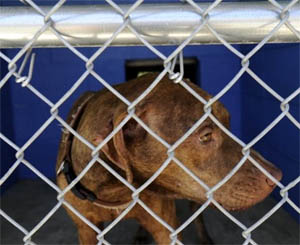 A tentative criminal court arraignment is set for Nov. 7. Davidson said he expects the pit bull mix will be put down, but that it would likely not take place until a formal criminal hearing takes place. He could not comment directly on the defendants' cases.

During the attack, Brandon's father, Tony Williams, tried to grab the pit bull as it dragged Brandon down the road by one ear. The black dog intervened and bit him. Williams said he scared it off and then went after the pit bull. A neighbor fatally shot the black dog. The female pit bull mix has been quarantined at the shelter since then.

Shelter workers said this week they are not sure how old the dog is or what her name is.

Brandon's father said neither of the dog's owners has contacted his family to see how Brandon is doing. But Switzer's mother did bring the boy a get-well card last week, he said.

Whether it's to see a plastic surgeon, orthopedic surgeon, oral surgeon or an ear nose and throat doctor, Brandon's family drives from Newport to Knoxville and Maryville and back about three times a week.

After the attack Brandon's aunt, Tammy Phillips, started a fund to raise money for her nephew from her home in Chattanooga. She planned to give him the full amount she's raised next month, but said she dropped off $675 this past weekend to help Brandon's parents with gas money.

Brandon has a few options to help him live a more normal life without his ears, his father said.
Doctors can attach removable prosthetic ears.

Or they can create prosthetic ears to be inserted under his skin. The only problem with that option, his dad said, is the potential for infection.

So his family is leaning toward a third option. 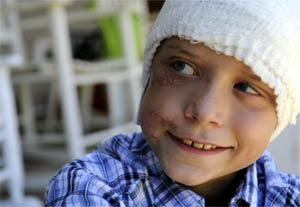 "They can take a bottom rib and mold an ear out of the cartilage and then put it under the skin," his dad said. "They'll do it with two ribs, one for each ear. It could take a few years (to finish) the surgeries, but it's better because it's a part of his body."

For now they have time to make a decision. Doctors want him to heal during the next six months to a year before they start reconstruction.

An added plus? the Shriners organization plans to foot that bill, according to Williams.

"They contacted us and said they have a plastic surgeon in Cincinnati that could do it and they'll cover everything," Brandon's dad said. "We've filled out the paper work and we're waiting on them schedule an appointment so he can be examined."