CALIFORNIA -- Los Angeles County sheriff’s deputies accidentally shot and killed a teenager in Palmdale early Thursday when their bullets bounced off the ground as they opened fire on an aggressive Pit Bull, sheriff’s officials said.

The 17-year-old was struck in the chest by at least one “skip” round several yards from the deputies, who may not have noticed the teenager in the darkness when they fired several rounds at a charging pit bull just after 3:40 a.m., officials said.

Moments earlier, the dog had bitten one of the deputies in the knee and the teenager had restrained the animal so that it wouldn’t attack again. The deputy bitten by the dog was also struck by a fragment of a bullet that bounced off the ground in the shooting. 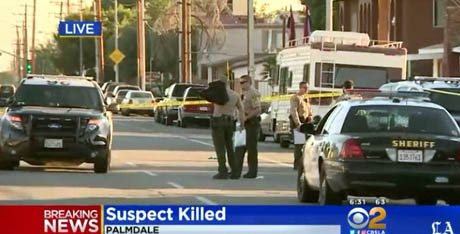 A family member identified the teen as Armando Garcia, who had attended R. Rex Parris High School in Palmdale.

In a news conference at the scene hours after the shooting, Capt. Christopher Bergner of the Sheriff’s Department Homicide Bureau said it appeared that both the teen and the deputy had been struck by rounds that ricocheted off the ground when deputies fired at the charging animal.

“He may have been struck by one of the skip rounds in what we’re calling an extremely, extremely unfortunate incident,” Bergner said. “Our initial impression was [the deputies] didn’t even see the individual coming around from the side of the building.”

Authorities said deputies had gone to an apartment complex in the 38500 block of 10th Street East around 3:40 a.m. in response to a call about a loud party.

As they arrived, a pit bull charged at them and bit one of the deputies in the left knee, Bergner said.

The teenager, restrained the animal and brought it to the rear of the complex, which was around a corner, Bergner said.

Meanwhile, the deputies retreated from the home to call for backup and medical units, who arrived and checked on the bitten deputy’s injuries.

At some point, the pit bull broke free and charged at the deputies again.

Bergner said the dog was a full-grown male that weighed 60 to 65 pounds and was five to seven feet away from the deputies when they opened fire.

The dog was struck and retreated to a carport area at the rear of the complex, the Sheriff’s Department said. Deputies decided to try to corral the dog to prevent anyone else from being attacked, but as they approached the carport they saw the boy on the ground wounded.

Deputies provided medical aid before paramedics arrived and took him to Antelope Valley Hospital, where he died.

Garcia’s aunt, Amber Alcantar, said deputies told her the teen was shot while trying to stop the dog from attacking deputies a second time.

Alcantar said she heard a knock on her door in the early morning. It was Garcia’s friend, who was frantically looking for the boy’s mother.

The youngster was holding a pair of bloodied shoes. They were Garcia’s, Alcantar said.

"Obviously something was wrong," the aunt said. She and Garcia’s mother went to two hospitals in search of him, but couldn’t find him and eventually returned home.

The Pit Bull's owner declined to give her name because “she had too many things going on with the law right now.”

She said the dog is a 3-year-old blue-nosed pit bull. Her home is used as a local hangout by some of the neighborhood kids.

“They are all my friends,” the woman said. “They are good kids. They come over and they listen to music.”

She said that, like on any ordinary night, the neighborhood kids were hanging out early Thursday and listening to music. Her dog was loose, but CLAIMS is well-mannered, she said.

She was skeptical at deputies’ claims that her dog attacked them.

“That's not my dog. That's not his personality,” she said.

After the shooting, deputies hauled her pit bull and Chihuahua away.

“They took the dog, but [Garcia] lost his life. That's not justice," she said. 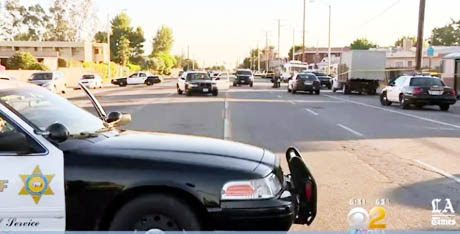 The deputy who was ATTACKED and later struck by a bullet fragment was treated at another local hospital and was released, Bergner said. The dog was shot and survived but will be euthanized.

Under the department’s use-of-force policy, deputies are allowed to fire at animals if they “reasonably believe” that they’re about to be killed or be seriously injured by the animal.

Bergner said any time a deputy fires a duty weapon, he or she is put on temporary desk duty while the incident is investigated.