Florida: Angelina Daniel, 20, arrested for animal cruelty. Police say she was supposed to care for her sick mom's pets, instead she abandoned them to die

FLORIDA -- A Marion County woman who was supposed to be caring for her sick mother’s pets severely abandoned the animals causing two dogs to die of starvation, has been found and arrested police say.

Belleview Police Department Sgt. Jody Backlund said he had received information as to the whereabouts of Angelina Elizabeth Daniel, 20, and went to the 2200 block of East Silver Springs Boulevard in Ocala. 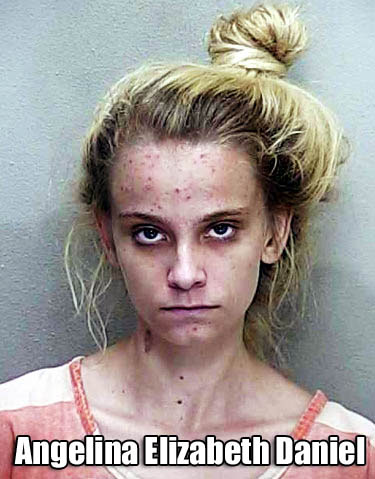 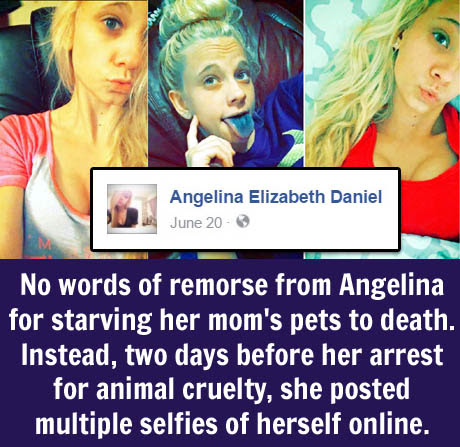 He said he saw Daniel wandering around in a parking lot and took her into custody without incident at 1:25 p.m on June 22nd.

On June 1st, Marion County Animal Services was called to Daniel’s mother’s home at 5927 SE Stetson Road in Belleview by area residents concerned for the welfare of some animals.

Backlund said the home was filled with feces and a terrier-mix and a Chihuahua were dead in the laundry room.

They appeared to have been deceased for some time, Backlund said. 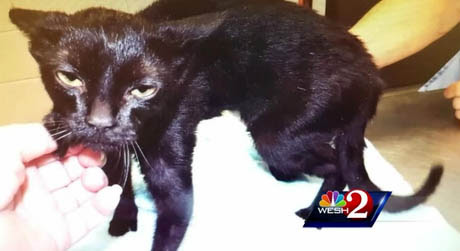 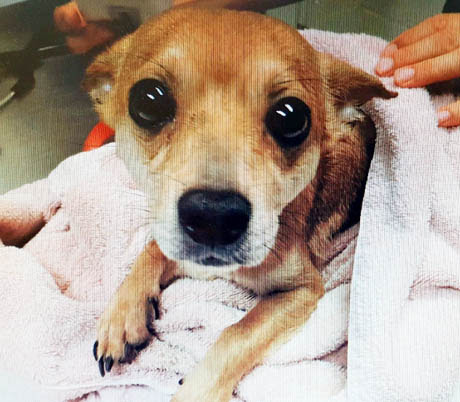 Necropsies on the dead dogs showed they died from starvation and dehydration. Their stomachs were empty, according to a report provided to Backlund by county officials.

Neighbors said they're beyond words to find out that animals inside the house were dying and starving adding that the people who lived there have only been here for few months.

"There is no odor, generally have a smell of some kind," neighbor Norma Payton said. 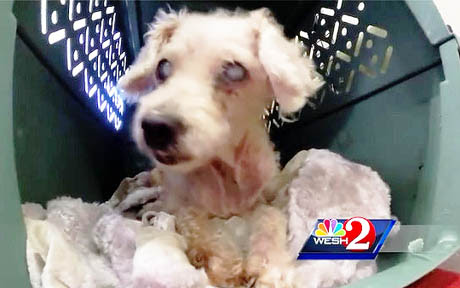 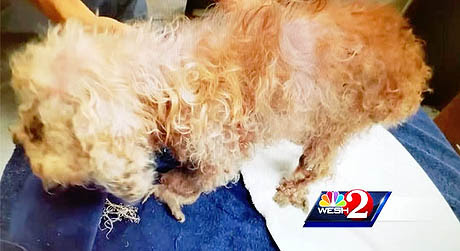 This blind Poodle's fur was matted to its body.

Angie Daniel’s mother has been hospitalized for almost three months. Water and power had been disconnected from the home.

The detective was told co-workers of the woman had paid utility bills and bought food for the animals when she first went to the hospital. The co-workers stopped giving money to Daniel and offered to take care of the animals, but that she refused so they assumed she was caring for them. 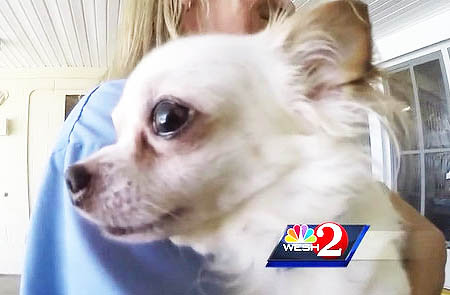 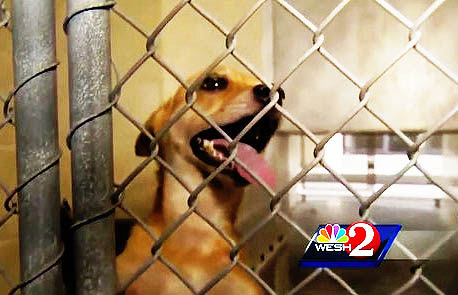 Some animals seem to have fared better than others.

She reportedly told the sergeant that the animals are like family to her and claimed she would never do anything to hurt them. 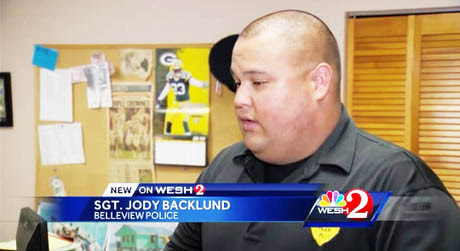 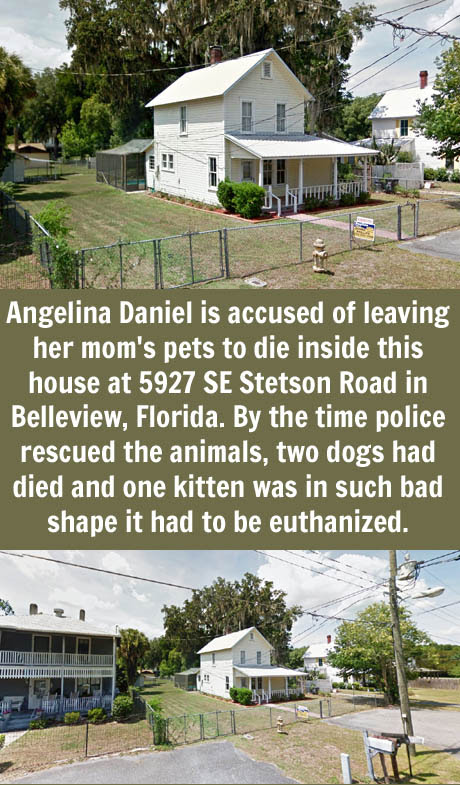 Authorities on Wednesday put out word that they were looking for Daniel and that she would be arrested on a warrant for animal cruelty and abandonment.

Backlund said Daniel signed paperwork to give BPD custody of the animals. She was arrested and taken to the Marion County Jail.

Of the 10 surviving animals, a kitten had to be put down due to its condition. An Animal Services official on Thursday said the rest of the animals are doing fine and should be ready for adoption soon.

Daniel denied an interview request from the Star-Banner.

It looks like Angelina's mom's name is Lisa Lorette Gemmette. From an obituary online, Lisa's mom Bernice Gladu Gemmette passed away in 2016 and it appears that with her inheritance she purchased the house on Stetson. Lisa, then fell ill, to the point that she had to be hospitalized - neighbors say since mid-April of this year.

Neighbors say that at first, Lisa's daughter Angelina was being given cash to pay the bills and buy food for the animals, but then the money flow stopped. Maybe they'd already suspected that Angelina wasn't using the money like she was supposed to; last month the utilities were shut off at her mom's house for non-payment.

I feel so sorry for Lisa. Here she's had to deal with her mom dying, buys this cute house (with a swimming pool!) for a fresh start, then falls ill but thinks her daughter is taking care of things for her. To have to tell her that not only did her daughter not take care of her home, her bills and her pets but that she starved them to death... prayers for Lisa and the animals that suffered.

Back in April, Angelina Daniel created a GoFundMe page, trying to raise money saying her mother had been hospitalized. There are no photos, no updates and it didn't get any donations. Good thing no one donated; who knows what Angelina would've done with the money.

Sadly we have hit a scary major bump in the road, we're praying for our mom to have a quick, strong, healthy recovery. Things are really tight right now, sense we live out of Ocala, and she is and impatient in a local Ocala hospital. They're has been and will be alot more procedures done for her to ensure the best care for her situation. Anything anyone can help with would be a major blessing at this point. Anything given will be used to make sure we make it financially, and we don't have to go without things that are really needed during this time, anything left over will go to her medical bills and making sure everything is covered. Thank you to anyone and everyone will to help. We greatly appreciate it.
Help spread the word! 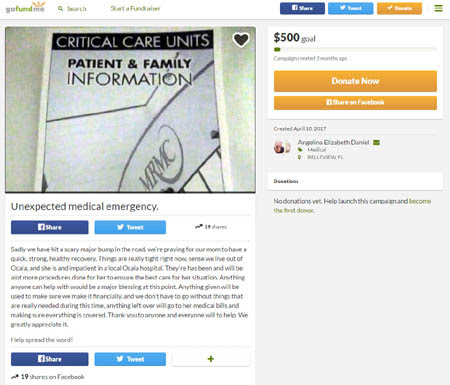