(December 2017) Connecticut: Owner of aggressive American Bulldog ordered to wear muzzle when in public claims it's too stressful for his autistic son

CONNECTICUT -- Tensions are running high after a resident on Friday took to Facebook to question the muzzling of a dog that its owner CLAIMS "comforts his autistic son".

Steven Frischling’s post on the Niantic Beach Bums page details a May incident in which an American Bulldog named Sally got loose from 5 Wildwood Drive, where Frischling’s ex-girlfriend Susannah Seefeldt lives. The post has garnered more than 200 comments. 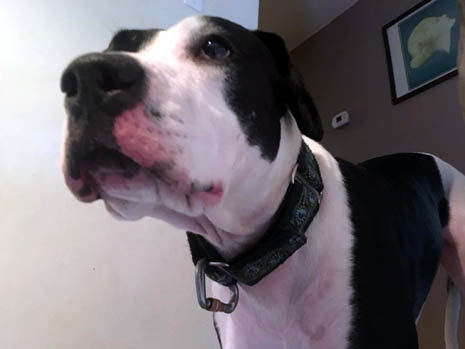 The post fails to describe an earlier April event in which Sally allegedly left a dog walker and another dog with moderate to serious injuries.

Because the May incident was the second time Sally had been cited as a nuisance dog, the animal control officer issued a muzzle order for Sally. The officer additionally charged Frischling’s ex-partner, Susannah Seefeldt, with misdemeanor owning a nuisance dog.

Frischling, the subject of an ongoing civil suit regarding the April case, is calling on the town to overturn its order to muzzle Sally. He said the dog used to comfort his son on walks along the beach or even from the house to the bus. Now his son has horrific fits at the sight of Sally in a muzzle.

Police Chief Mike Finkelstein, who was not the chief when either incident occurred, said the town is working with the State’s Attorney’s Office and the court on the case. 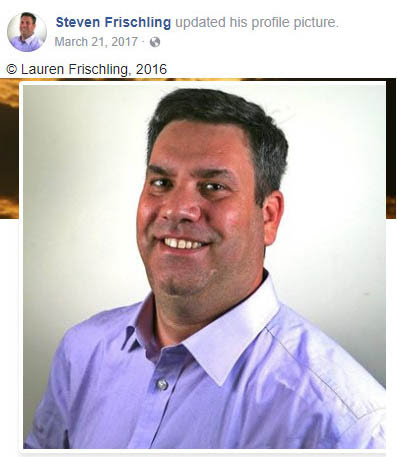 While the court nolled, or opted not to prosecute, Seefeldt’s charge, the judge also warned removal of the muzzle could lead to arrest.

The key, Finkelstein said, is to determine whether the judge issued a new order or simply reminded the defendants of the animal control officer’s order. Town officials would be reticent to overstep a judge’s order, he explained.

The town has asked for a transcript of the appearance.

According to a police document, a UPS driver on April 6 reported one dog had attacked a woman and another dog near 26 Old Black Point Road. On arrival, police said they spoke with three witnesses, two of whom said they fought off a black-and-white pit bull and watched it run to 5 Wildwood Drive.

Police said the black-and-white dog had dragged the woman, injuring her shoulder and leaving cuts on her elbow and hand. The aggressor also tore a large chunk of skin from the neck area of the victim dog, they said. Photos of the small dog show extensive amounts of blood.

Frischling said he was using the restroom that day when his son opened the door, allowing the dog to slip out. He was issued infractions for allowing a dog to roam and owning a nuisance dog. The dog additionally was quarantined for 14 days.

Frischling said Wednesday he believes Sally wasn’t involved in the attack — he took photos of her shortly after it occurred and saw no blood on her white face.

He also said he doesn’t know why he was issued the infractions when it’s his ex-wife’s dog.

Records list Sally as a black-and-white American Bulldog that was licensed to Frischling at the time of the incident. The breed is sometimes considered to be of the pit bull type, though that’s the subject of much debate [mostly from people who claim "there is no such thing as a pit bull!" All bully breeds are Pit Bulls and they all have been bred to have a propensity for sudden, unprovoked violence].

According to the town clerk’s office, Sally is no longer licensed; the dog was put in Seefeldt’s name in October, but the check bounced and another never was provided. 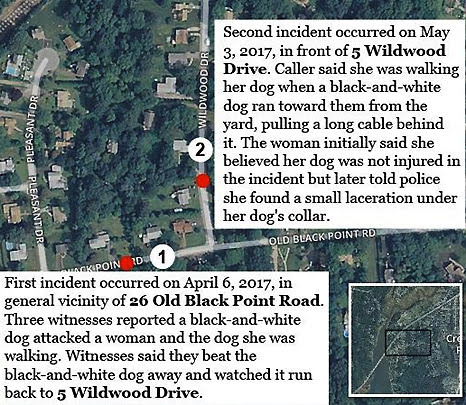 Two women in June launched a civil suit against Frischling in response to the April incident: Anne Rudge-Pinkham, the 91-year-old owner of the attacked dog, and Tammie Schenking, who was walking the dog that day.

The suit alleges Schenking sustained injuries to her neck, shoulders, ribs, left leg, right elbow and vocal cords, all of which required medical care. It further states Rudge-Pinkham’s dog had to undergo surgery because of its injuries. 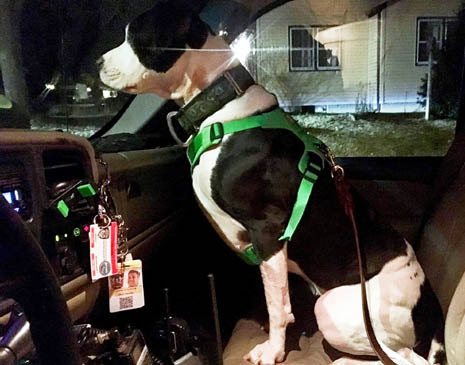 Can you imagine this dog running towards you, barking,
growling and trying to attack you and your pets?

Records show Frischling in September asked the court to dismiss the case because he doesn’t own Sally or live at 5 Wildwood Drive. The judge denied Frischling’s motion.

In November, the plaintiffs moved to have Seefeldt added as a defendant. The judge granted that motion.

The case is ongoing.

Click here to read the document filed regarding the lawsuit. 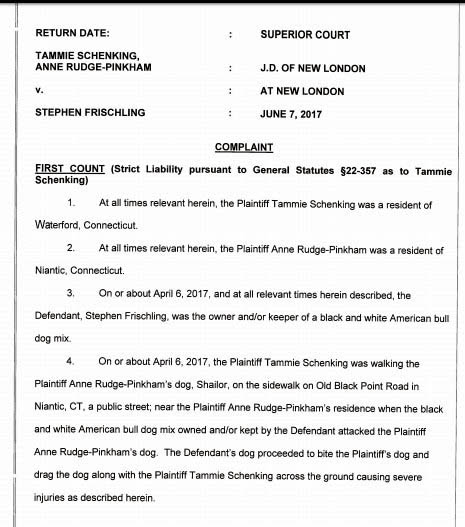 Police on May 3 returned to 5 Wildwood Drive, this time because Sally had pulled the spiral stake she was tethered to out of the ground.

Why is a known-to-be-aggressive large American Bulldog being 'staked' in the ground in the yard and left unatttended? The very fact that they thought this was a good idea -- right after the first attack -- tells you a lot about them.

According to a police report, Sally ran toward a woman walking her dog in front of the home, causing the woman to fall. Seefeldt, outside at the time, ran over and regained control of Sally.

According to the report, the woman initially said she didn’t believe her dog was hurt in the incident, but later reported having found a small laceration under its collar.

The police file shows Seefeldt in the past had spoken to the woman "about Sally and her issues with small dogs."

Frischling on Wednesday took issue with the photos police had on file for the incident, which were not taken by officers. There’s no timestamp, no frame of reference and, Frischling said, no way to know for sure the mark came from Sally.

Finkelstein said his department has since changed policies to ensure officers take quality photos at each incident.

All they had to do was document who claims to have taken the photo and when they received it. That person would be required to come to court to be sworn in as a witness to testify that they are the one who took the photo on X date. This person is opening themselves up to perjury charges if they are lying. Frischling is grasping at straws, thinking this is some conspiracy with doctored photos. 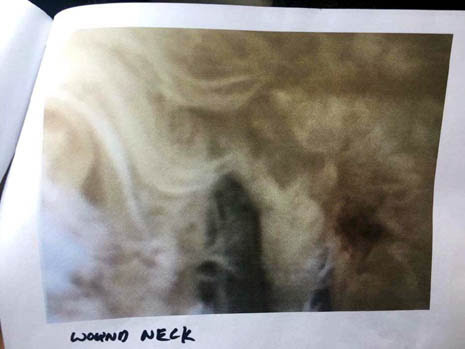 Frischling also said he’s wondering why his dog got a muzzle for its second nuisance incident when no bite occurred.

According to state statutes, a dog can be a nuisance “by reason of vicious disposition or excessive barking or other disturbance.” In other words, a biting incident isn’t a prerequisite.

Hundreds of people reacted to Frischling’s Facebook post. Many called on the town to revoke the muzzle order so Frischling's child could find some peace. Some of those commenters didn’t appear to be aware of the April incident that preceded May’s.

Others questioned Frischling’s use of a community forum for a personal issue, especially when his civil suit is ongoing.

Frischling said he tried to seek mediation with the town through a third party, but was denied the option. The town attorney, without the paperwork at his disposal, declined to comment on the reason mediation was denied. 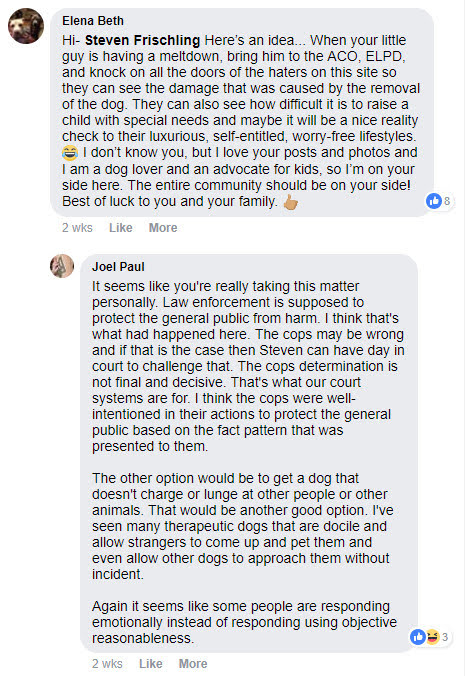 "We go through these processes to make sure we're doing everything we can to keep everybody safe," Finkelstein said.

Frischling stressed he has no ill will toward the town and doesn’t intend to sue it.

In this case, Steven Frischling has been ordered to keep his vicious American Bulldog muzzled whenever it's out in public. Steven Frischling claims his autistic son has tantrums, outbursts and pokes his own ears until they bleed --- simply at the sight of their dog wearing this muzzle.

People with autism do have challenges. However, change is a part of life. 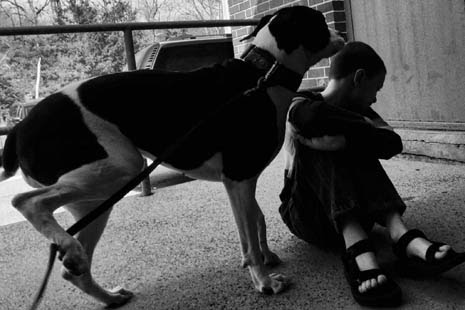 Steven Frischling's son will have to deal with change when they move homes, when one of his parents change jobs and time schedules, if his parents have a new baby, when they purchase a new car and swap out the old one, when he has to change schools, when they go to a new restaurant, when they go to a new city/state on vacation, when someone passes away. He'll certainly have to adjust to change when this American Bulldog eventually dies.

So Steven Frischling's argument about this dog being muzzled is not winning me over. The dog is not required to have a muzzle on when its inside its own home with the family.

The muzzle protects everyone else from Steven Frischling's dog, which has shown itself to be unpredictable, aggressive and willing to attack - not just other animals but human beings as well. 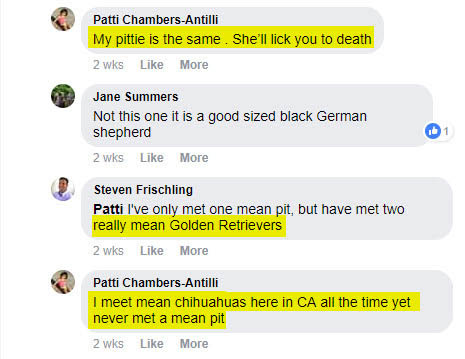 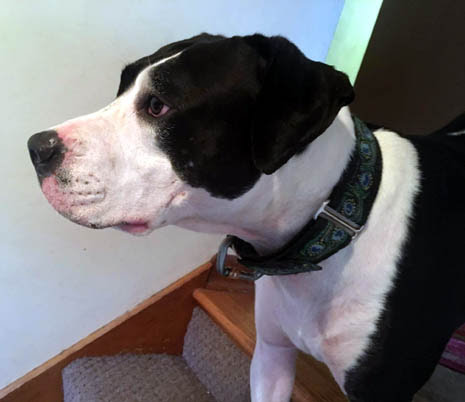 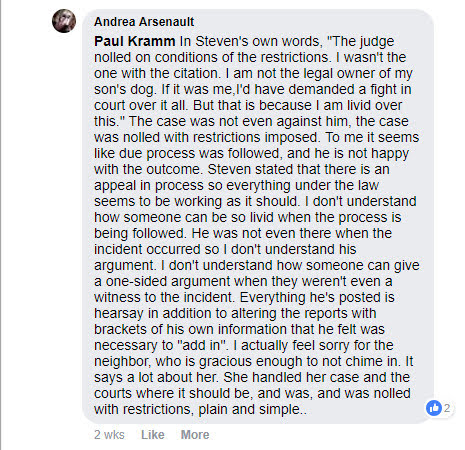