INDIANA -- An anonymous caller told officers Aug. 5 that noises were coming from a Francis Street apartment that sounded like a dog was being beaten.

That day, an Animal Care & Control officer went to the apartment where she found Nani, a four-month-old puppy, trembling in a bathtub and covered in excrement and urine. Her breed was not mentioned in court documents.

The owner, Defonte C. Acklin, 22, of the 4400 block of Standish Drive, told police Nani had gotten into the trash when he left his apartment for about 15 minutes and she had urinated and defecated on the floor. 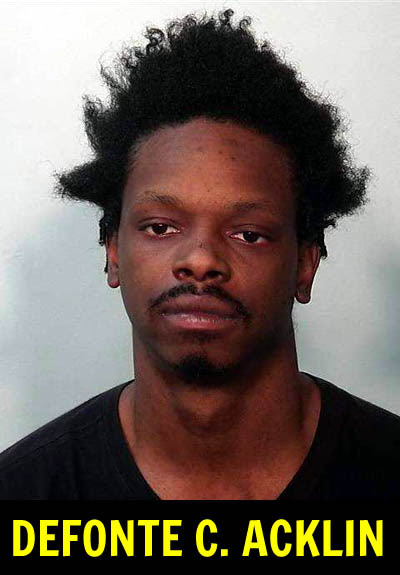 The dog “knew she was in trouble as she ran into her kennel as if to hide from him,” Acklin told the officer. He got his hand bitten when he reached into the kennel to pull her out, causing a puncture wound, court documents said.

Acklin said he had “whooped her ass with the arm of the chair,” and produced the chair arm, although he wouldn't allow the officer to take it with her, court records said.

Nani had bloodshot eyes and there were red fluid droplets all over the base of the bathtub.

At the Northeast Indiana Veterinary Emergency Hospital, doctors said Nani had bruises on her lungs and respiratory distress, fractures to her teeth and was missing her front incisors.

There was blood in her ear canals and her oral cavity and a red lesion to her right ear with other eye injuries. She was limping and several of her ribs were fractured, injuries consistent with blunt force trauma to the thorax.

Acklin was charged with felony torturing or mutilating a vertebrate animal and two misdemeanor charges of cruelty to an animal. He was being held at the Allen County Jail held in lieu of $4,000 bail.

Nani was adopted into another home on Aug. 30.