Alabama: Woman searching for her pet Serval after it escaped from her home

PELHAM, ALABAMA -- The owner of a domesticated African Serval, an exotic cat from sub-Saharran countries, has been looking for her pet since his escape on April 24th from the Chandalar area of Pelham.

In a Facebook post, Felicia Wilson, of Pelham, says the eight-month-old cat named Juno escaped out of her front door as her daughter was heading off to school.

Wilson says the cat "is not a wild animal" and is urging anyone who spots him to refrain from shooting. 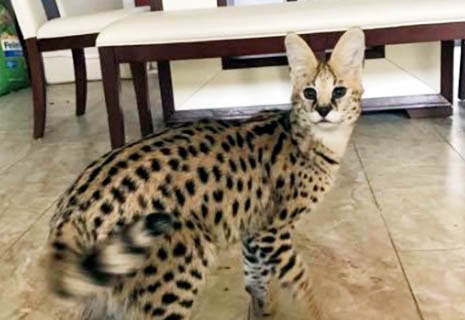 It is legal to own African Servals in the state of Alabama.

"The police said if push comes to shove they will have no choice but to shoot him if they can't catch him," she wrote in a post, which has since been deleted.

Wilson says Juno will not hurt other animals or people, but he will run away if approached. Wilson believes a tranquilizer might need to be used to catch him, as Servals can run at speeds up to 45 miles per hour.

According to Pelham Police, Pelham Animal Control, Shelby Animal Control, and the Birmingham Zoo have been consulted in this case. Officers have extensively searched the area and placed devices throughout to safely capture Juno, but he has not yet been spotted.