PUYALLUP, WASHINGTON -- A man is recovering from a brutal dog attack in Pierce County.

The department said on Wednesday, a deputy responded to a 911 call reporting a dog attack in progress in the 15500 block of 119th Ave. Ct. E. in Puyallup's South Hill neighborhood. 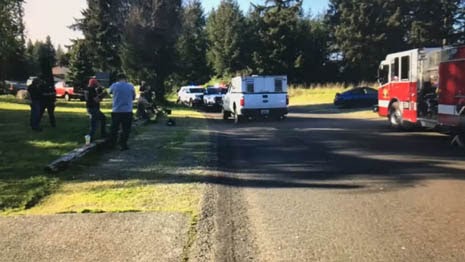 When the deputy arrived on scene, deputies said the victim was on the ground covered in blood and neighbors, like Jon Zemanek, were trying to help the victim.

Zemanek said he heard screams for help and ran outside thinking it was his dog thatwas loose, but he saw the pit bull attacking the man by his front yard and he didn't hesitate to help.

"The first thing I could think of was to grab his jaw and try to pull,” said Zemanek.

Zemanek still has the punctures from the pit bull's teeth sinking into his fingers. 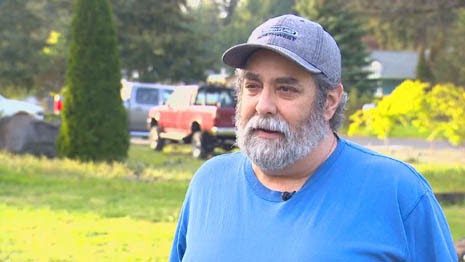 He tried to pry the dog's jaw off a man's arm before grabbing a metal pry bar.

“Lot of shaking myself,” said Zemanek. “I couldn’t believe I did what I did."

Deputies said the victim and a woman had been "playfully" arguing in a car when the dog lunged at the man and bit him in the face.

They pulled over by Zemanek’s yard, the man ran out but the dog went after him.

At one point neighbors said they helped the woman get the dog back into her car, but it jumped out of an open window, ran after the man again, caught him and began mauling him a second time. 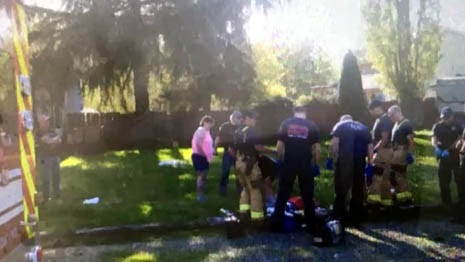 A responding deputy finally fired shots at the dog, killing it after it let go then started circling the man, ready to attack again.

Neighbors said the whole situation was so frantic and uncontrollable; they don't think there was any other way to stop the dog.

“I never like to see an animal get put down unless it absolutely has too,” said Zemanek.