CALIFORNIA -- For the second time in two weeks, a local woman walking a small dog on a leash has endured a bloody struggle to defend her dog from an attacking larger aggressive dog.

On Monday morning, shortly after 8:30 a.m., Margo Delgado was walking her a mini Labradoodle named Kai, on a Paseo just north of Via Rosa Linda in Valencia, near Whole Foods Market.

A dog owner, described as in his 60’s or 70’s, was walking his leash-bound pit bull – or Rottweiler – type dog in the opposite direction, the woman’s husband, Gil Delgado, told The Signal Friday. 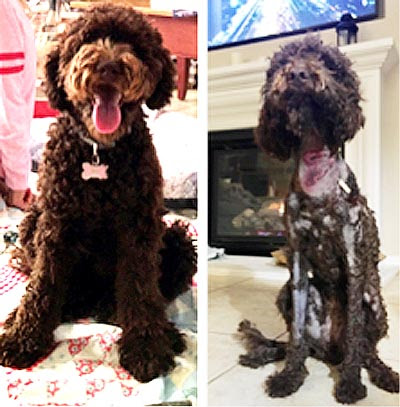 “The pit bull-type dog crossed into the north-westbound lane and headed straight for Kai,” he said.

“My wife asked the owner if his dog was friendly, he replied ‘yes’ and yet immediately the pit bull attacked Kai, biting and clamping her (dog) around the neck.

“After several minutes of my Margo struggling to free our dog, a Good Samaritan neighbor named Jason heard my wife’s screams and came out of his home to help.

“He used a long pipe (aka 'break stick') to pry the dogs jaws free from Kai’s neck.  I have no doubt that Jason saved our dog’s life,” Delgado said.

Margo Delgardo suffered “several puncture wounds to her hand,” according to her husband.

“When I arrived home my wife was covered in blood and Kai was completely silent,” he said. “We got her to the vet in a couple of minutes. The doctor said that Kai was lucky to be alive, but will make a full recovery.

“Unfortunately, the owner of the dog that attacked left the scene and did not leave his contact information,” Gil Delgado said, noting he posted flyers “all up and down the paseo” without luck.

Officials with the Los Angeles County Department of Animal Care and Control have now launched their own investigation.

“We are planning on investigating this incident,” Chris Kim, spokesman for Animal Care and Control told The Signal Friday.

Kim said Animal Control officers are expected to scour the neighborhood in an effort to locate the dog described by the Delgados and the dog’s owner.

“We do plan to go out and ask people in the neighborhood for help,” Kim said.

Monday’s attack comes on the heels of an attack that happened on Feb. 22 when two German Shepherds attacked and mauled a woman who was walking her tiny Pomeranian in Bridgeport.

The injured woman was taken by ambulance to the emergency room of Henry Mayo Newhall Hospital after being attacked by the dogs.

She suffered several puncture wounds to her arms, buttocks and hip from bites inflicted by the attacking dogs as she held her 8-pound Pomeranian over her head to protect the smaller animal.

“The dogs’ owner surrendered ownership of the dogs to the County (Animal Control),” Kim said at the time.

The dogs are scheduled to be humanely euthanized.