MISSOURI -- On Saturday the 25th while my sister was out of town for the weekend she got a call from her friend letting her know that her dog had been attacked by another dog while out on a walk.

He was eventually able to get the dog off of Jack and get Jack back in the house. 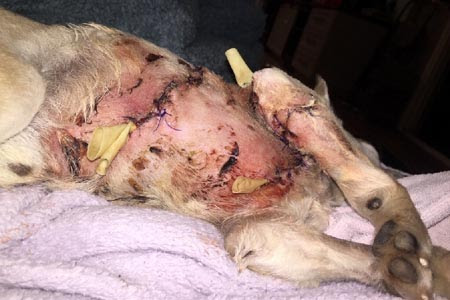 The pit bull stayed outside scratching at the door for about 10 minutes making it impossible for Brian to get Jack to the vet as soon as possible. The pit was picked up by dog pound and so far no owner has come forward leaving my sister with a huge vet bill and a seriously injured baby.

After 2-1/2 hour surgery yesterday they got the internal damage fixed up and will be keeping an eye on his leg to determine if he will be able to keep it.

My sister says don't be to sad if he loses his leg he'll just have to live up to his name of Captain Jack Sparrow and get him a wooden leg!

He is such a sweet baby and we are all happy for Brian quick response and of course for Zoey (her other dog) fight to save her friend. Anything you can do to help take some of the burden off my sister would be greatly appreciated! 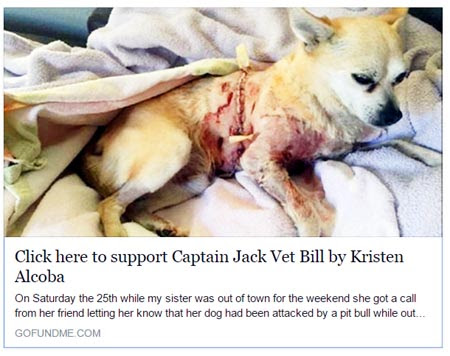 While away on a quick weekend trip my boy Jack was attacked by a loose dog on a routine walk with a friend who was dog sitting. 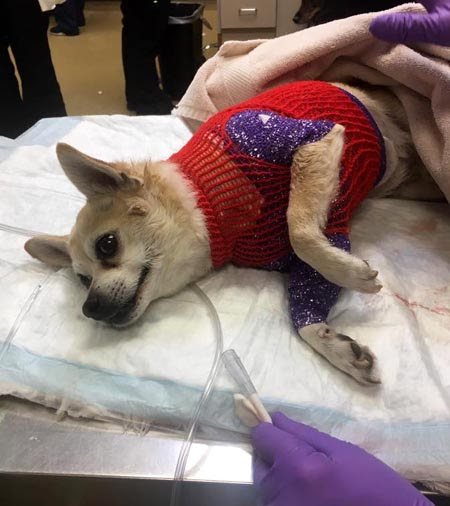 Once again Jack proved to be Superman and has no life threatening injuries but suffered a big gash missing from his abdomen and very traumatic injury to his front right leg. He spent 36 hours in the ER on pain medicine until we were able to fly back last night and get him.

It's been a rough couple days but we found a wonderful doctor who's been taking really good care of him today. After 2.5 hours in surgery he was able to patch up his abdomen but the fate of his leg is play by day situation and how it heals over the next couple days.

He currently has drainage tubes and will remain overnight at the doctors. For those that know Jack knows he's proven many times to be indestructible and this is no exception. He is the toughest little guy I know. 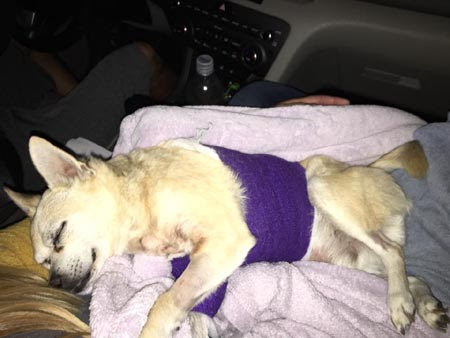 Thankfully the dog was picked up by animal control and owners have yet to come forward. Thank you to those that have reached out and showed your concerned for our furry kid. Also a big shout out to Brian Murray for showing no mercy to get that coward dog to let loose of Jack. No doubt in my mind there would have been a different outcome if you didn't take the actions you did. Thank you is not enough.

I'll continue to update as Jack goes through is recovery journey. Oh and Jack also wants people to know not to feel sorry for him if he loses a leg. He already has his peg leg picked out and is fully prepared to live up to his full given name... Captain Jack Sparrow. 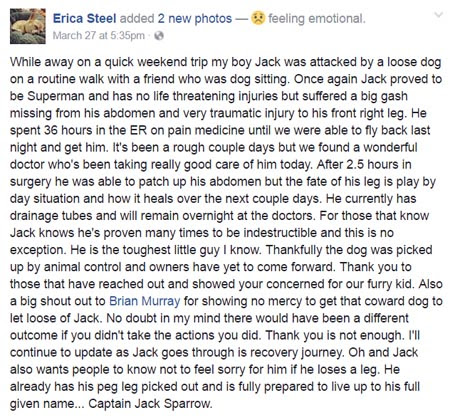