Colorado: A day in the life of an animal law enforcement officer

COLORADO -- She isn't a dog catcher and she doesn't work at "the pound."

Officer Tasha Reed is one of the 10 men and women who serve as animal law enforcement officers of Pueblo Animal Services of the Humane Society of the Pikes Peak Region.

"We're much more than a dog pound or just dog catchers," Reed said. "We're a family and we're trying to integrate that into the public." 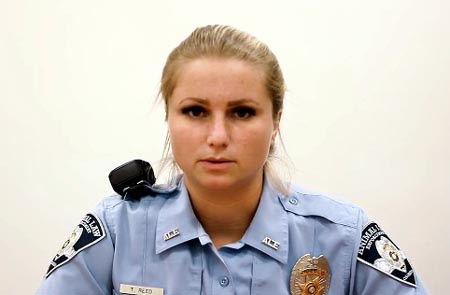 Reed has been an officer and worked at the Pueblo Community Animal Shelter for more a year, gaining a reputation as a stern, tough and caring officer who goes out of her way to help animals and humans alike.

Suiting up
Like other law enforcement agencies, the men and women of Animal Services Pueblo dawn uniforms equipped with safety gear, a badge and a radio.

"We do wear personal protective gear," Reed said. "I have bite-resistent gloves and I wear a bullet-resistent vest. You never know what you're going to come across, especially being in law enforcement."

The day begins by suiting up and preparing their trucks for the day ahead.

Officers check their call logs for complaints or calls that were placed overnight or for follow ups from the day before.

Each officer is given a specific location to patrol and follow up on calls, and once they've prepared, they hit the streets.

Types of calls
Each day an officer can respond to more than 20 calls.

For every call or incident, a report must be written and the incident must be logged.

Though the winter is slower, in the summer it is not uncommon for officers to respond to upward of 30 calls per day.

"Our main concern is always public safety and animal safety," Reed said. "My typical day is receiving calls and calls getting dispatched to me."

On top of calls that exist before officers arrive in the morning, priority calls can occur throughout the day.

A priority call is one that arises on the spot and is dispatched to all officers. The officer closest to the call's location responds.

"Part of my responsibility as an animal control officer is to respond to calls that the public perceives as welfare concerns or endangered animals." Reed said. "A lot of the time owners leave a dog in a car for long periods of time and the public sees that as cruelty and that the dog is in danger. We respond to every single one of those calls."

Reed uses a thermo-temperature monitoring tool to read the car's temperature and the dog's. She runs the vehicle's license plate and if a dog is friendly, reads the dog's tags to find an owner.

"We exhaust every resource we can to find the owner and make sure the dog is in good health and is active and alert and stays that way," she said."It poses as a very dangerous threat for the dog, but also public safety if someone tries to rescue that animal."

On any given day, Reed may also take part in investigations stemming from on-going cases or possible cases involving animal cruelty. 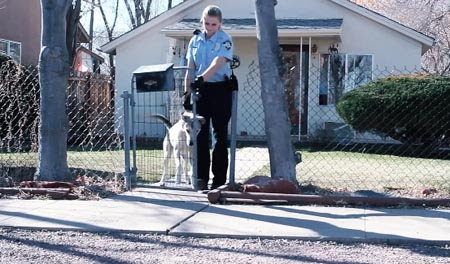 She will make initial contact with the animal and its owner and follow up numerous times throughout the coming weeks and months.

"Every day is different," Reed said. "I can just be doing patrols all day or I can do four or five (investigations) on animal cruelty."

Paw patrol
Another integral part of the officers' job is to patrol their geographical ordinance for roaming pets who may have escaped their yards.

"One of our most repetitive types of call is dog-at-large," Reed said. "If a citizen sees a dog roaming loose, that is a violation of Pueblo municipal code, and as an officer we are obligated to respond."

Officers travel to the previous location in which the dog was spotted and then must contain and catch the animal. Reed typically tries to coax the dog into her tuck by calling it. She sometimes uses cat food to lure the hungry pooches into her vehicle.

"For some reason, dogs love cat food," she said.

When animals are found, officers check for tags, scan for chips and even search through the hundreds of lost pet pages on Facebook to find the owner of the animal

Education
As law enforcement agents, Pueblo Animal Services can issue citations and court summons when a person is in violation of a law or municipal code.

However, when possible, Reed would rather educate citizens on how to be responsible pet owners and relay information regarding the law.

"I feel it is more important to educate the public," she said. "I like to educate pet owners who aren't always aware that their dog may be in a dangerous situation. Whether it's their first pet or they're unaware, we here at Pueblo Animal Services always try to educate the owner. 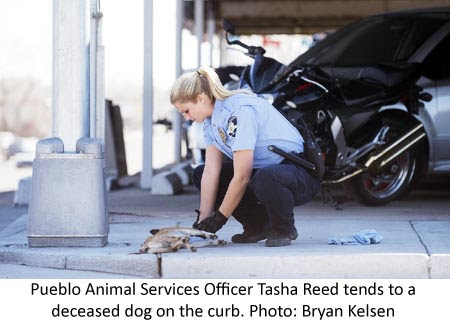 Reed's goal is to create a safe environment for both the animals and their owners.

"If we can educate the owner and make them aware of the situations, then we can put them on the right path to make sure their dog is in proper health and conditions," Reed said "Then they don't put their animal in a dangerous situation."

Thought the shelter is not a "no kill shelter," the only animals who are euthanized are aggressive or deemed too vicious to adopt out.

While at the shelter, animals receive vaccinations, medical checks, are bathed and groomed and taken care of until they are adopted.

"We ensure animals are getting necessary vet treatment," Reed said.

Reed said that the shelter and Pueblo Animal Services is more than just catching dogs.

"We do everything from safety talks to educating the public to holding public events," she said. "We save dogs from fires, we help people who get attacked and we provide resources to overcome those situations."

In the line of danger
Sometimes officers must face dangerous situations, whether it's an animal attacking a human, a case of animal cruelty or containing an aggressive animal loose on the streets.

"We are trained to put the public safety, the animal's safety and our safety over everything," Reed said. "Our main thought going into a dangerous situation is to get everyone safe."

Recently, Reed responded to a call in which an aggressive dog was attacking its owners. Reed was the first law enforcement officer to go into the house.

There was no time for Reed to be scared, she only acted instinctively.

"When I go into a dangerous situation, my first thought is to get control of the dog," she said. "Get the dog contained and proceed accordingly, whether it's to impound the dog or call paramedics to start treating wounds." 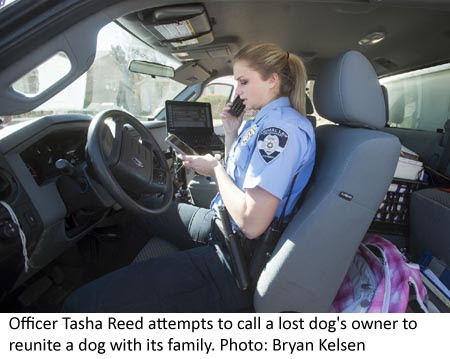 A dangerous situation can be emotionally and physically taxing, but Reed says maintaining professionalism is key.

"If you separate your emotions and just be professional in the field, you can be successful," she said. "I've had to hold emotions all day and then I go home and cry. It can be tough, but it can also be rewarding."

The payoff
What keeps Reed -- and other officers -- motivated is the rewarding feeling of reuniting animals with their owners.

"The most rewarding part of my job is reuniting a dog, or cat, or bird with its owner," Reed said. "Seeing their face light up when you're bringing their dog to their front door step . . . you know they missed their pet and to be able to bring them back together is really just an awesome part of my day."

Reed said that helping people and especially animals has not only kept her on the job, but has led her to call it her career.

"The thing I love most about my career is that I get to help animals," she said. "It gets me through my day that I'm going to help at least one animal that day. Knowing I can make a difference in an animal's life is what gets me out here everyday."