Massachusetts: The slippery story of a squirrel, a dumpster, and some butter

MASSACHUSETTS -- This squirrel slipped up. But its journey from stuck-in-a-hole to back-on-the-mend was a relatively smooth one.

Officials from the Animal Rescue League of Boston this week said they were called to an unusual scene involving a fluffy-tailed critter that somehow managed to get its head lodged into an opening at the base of a dumpster in Quincy. It had likely been in search of leftovers and discarded food, but wound up empty-pawed and immobile.

To make matters worse, a Quincy animal control officer tried rubbing oil on the squirrel to get it out. No dice.

Then a Good Samaritan tried to step in and help by lathering up the squirrel with butter to set it free. But still, the squirrel remained stuck. 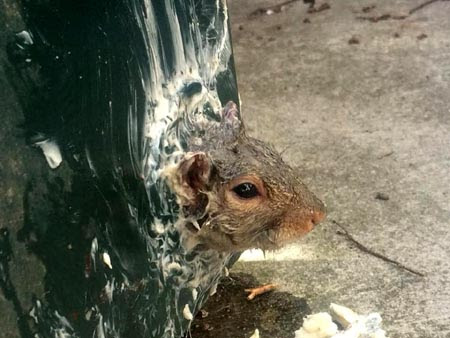 The incident resulted in a hilarious photograph of the animal gazing off into the distance, the spread smeared on and around its head.

The rescue league described the animal as “buttery and ashamed.”

According to a statement from the rescue group, the squirrel was eventually freed when rescue technician Bill Tanguay jumped into the dumpster and pulled gently on the squirrel, little by little.

“The squirrel was feisty and suffered some minor abrasions, but was otherwise fine,” officials said.

The squirrel was taken to the New England Wildlife Center, a science education organization and wildlife hospital and is expected to survive the ordeal — though the Internet shaming might hurt a little bit.

The rescue league offered this advice to those who encounter a similar situation in the future: “It is not recommended to try and free an animal on your own, as once that animal gets free it could bite and with the risk of rabies, you don’t want to get bitten by a wild animal.”

And definitely don’t waste your butter.