Georgia: Police say James Stevenson got drunk, fought with his wife and then got a gun and shot and killed their dog

GEORGIA -- The Catoosa County Sheriff's Office arrested James Eric Stevenson this week on charges that he got drunk and shot the family dog.

According to an incident report, Stevenson went fishing with his wife, Latoya Silmon, and the dog near 8 Eula Lane on Sunday. Silmon told police that Stevenson had been drinking all day. They got into an argument, and she left the fishing spot. 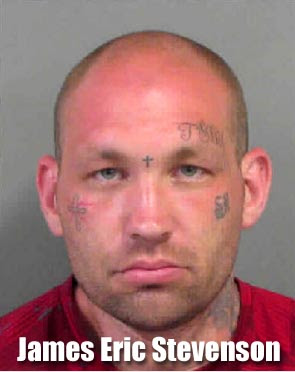 "She went to where she heard the shots and found the family dog lying on the ground," an investigator wrote in his report.

A deputy and a lieutenant talked to Stevenson, who denied killing the animal. A deputy wrote that Stevenson's breath smelled like alcohol, his speech was slurred and he couldn't keep his balance.

Later, the lieutenant talked to a family member, Margene Herron. She said she heard gunshots on Sunday night and walked outside. She found the dead dog next to Stevenson, who was holding a Taurus .38 special revolver.

The sheriff's office charged Stevenson, of Cohutta, with aggravated cruelty to animals, possession of a gun in the commission of a crime, discharging a firearm while under the influence of alcohol and discharging a gun near a public highway or street.

He remained in the Catoosa County Jail this afternoon.