IDAHO -- A poacher shot and killed a bull elk on farm ground earlier this month near White Owl Butte, which is about 19 miles southeast of Rexburg.

Whoever shot the animal didn't harvest any of the animal's meat or its antlers.

“This is not hunting. This is wanton killing,” said Idaho Fish and Game Regional Conservation Educator official Greg Losinski.

The person shooting the elk was not a hunter, he said.

“When they do this, they are criminal. They are not hunters. That's an important distinction,” he said. 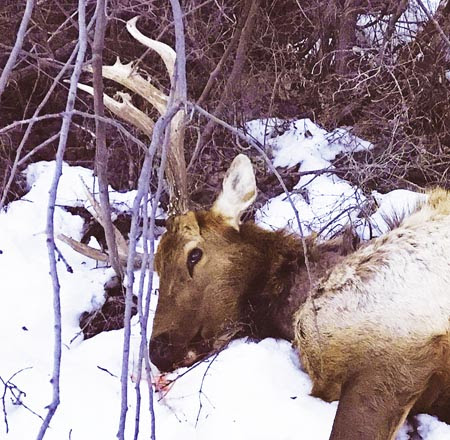 Fish and Game conservation officers investigated the incident and found the elk had been shot multiple times.

“More than one suspect was likely involved in the poaching,” Losinski said.

Located about 11 miles from Rexburg, White Owl Butte farm ground is a popular site for snowmobiling and antler hunting.

Losinski believes that someone may have seen something during the time the poacher shot the elk. He's asking the public's help in locating the person or persons responsible for the incident.

It was a resident who informed Fish and Game about the bull elk.

“It was reported. That's the way it works, and that's why we ask the public for assistance. We can't be everywhere,” he said.

If someone notices some suspicious behavior involving wildlife, Losinski asks them to take a picture and to report it. Pictures taken with smartphones can often provide the GPS coordinates.

This type of shooting takes away from Gem State residents who purchase hunting licenses and legally hunt the animals during designated hunting seasons.

“It hurts the residents and the citizens of Idaho,” Losinski said.

“In the winter we have depredation hunts to help reduce conflicts between elk, deer, ranches, livestock and feed,” he said. “It's keeping wildlife away from haystacks. If you harvest an animal, you can keep it.”

Losinski didn't know the exact penalty the poacher faces in this case. If he turned himself in, Fish and Game would handle it. But if caught, the poacher could spend some time in court, pay a fine and possibly go behind bars.

“Depending on what the prosecutor and the judge decides, it can be hundreds of dollars or more," he said. "There can be jail time."

It's not likely that the incident was an accident.

“It would be hard for this to be a mistake,” Losinski said.

Anyone with any information about the crime is encouraged to call Fish and Game Sr. Conservation Officer Andrew Sorensen at 208-390-0632. Or they can call the Citizens Against Poaching (CAP) hotline 1-800-632-5999.  Callers can remain anonymous and may be eligible for a reward.