OREGON -- A Salem family is mourning the loss of their family pet following an alleged violent dog attack Monday afternoon.

As Amanda Reyna was walking her children from Washington Elementary School near Lansing Avenue NE and Glendale Avenue NE, a black-and-white female pit bull-type dog ran out of a nearby home toward her 5-year-old son.

Before anyone could react, Reyna's 9-year-old longhair chihuahua, Fifi, ran in front of her son and blocked the other dog from charging him. 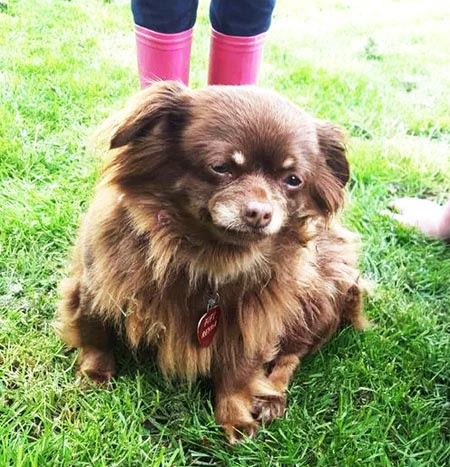 Fifi was no match for the larger dog. Reyna said she, her children, her friend Sara Rojas and Rojas's 10-year-old daughter watched in horror as the dog snatched Fifi up and thrashed her tiny, 10-pound body.

The pit bull's owner rushed out of their home during the commotion. He punched and pried open the dog's mouth to get her to release Fifi.

The dog dropped Fifi's limp body, and the owner hauled the dog back into his home, not giving Reyna his name or apologizing, she said.

"My husband went over to try talking to them while I tried to take care of my dog and my traumatized children," she said. 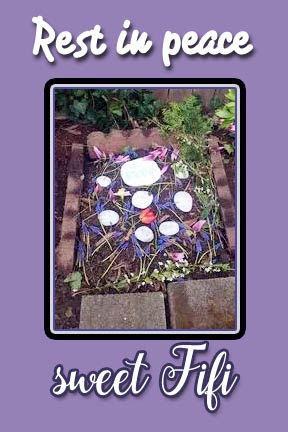 Fifi was bloody and breathing heavily when they rushed her to a nearby emergency veterinary clinic. Reyna said there was blood in her lungs. There was nothing they could do to help her pull through, she said.

Fifi was euthanized. Reyna and her family buried her in the yard.

Rojas said the dog's owners, who also run an adult care home out of their house, did not want to discuss the attack after Fifi was euthanized. The owner gave them $120 to pay for the euthanization.

The dog's owner did not respond to the Stateman Journal's request for comment.

Fifi's death has been hard on Reyna's family, especially the children who witnessed the attack. Reyna said her 5-year-old doesn't quite understand that Fifi is gone forever.

"That was his puppy who stepped in and saved him," she said. 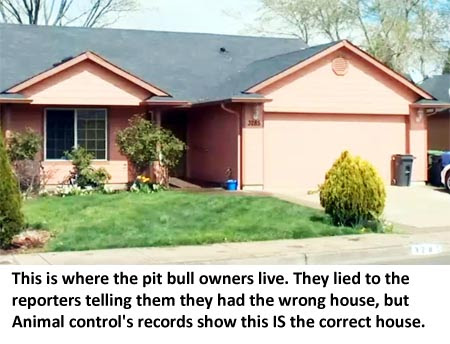 When FOX 12 tried talking with the owners of the dog, a man at the home said they didn’t have a pit bull and that they were at the wrong house.

But Animal Control's records show that it was the correct house - the man was lying to them. They also lied to Reyna, telling her that they had euthanized the pit bull. However, she says the day after they told her that, the pit bull was again seen running loose again in the neighborhood.

Reyna also learned it was not the first time someone had complained about the dog.

"It should have never gotten this far," she said.

TWO PREVIOUS COMPLAINTS OF THE PIT BULL RUNNING LOOSE AND BEHAVING AGGRESSIVELY... ANIMAL CONTROL DID NOTHING

Now, Marion County Animal Control officers are investigating. They confirm to FOX 12 there have been two complaints made against the dog in question in the past, dating back to March and July of 2016.

Public records show that in those complaints, neighbors said the pit bull was aggressive and had chased someone. 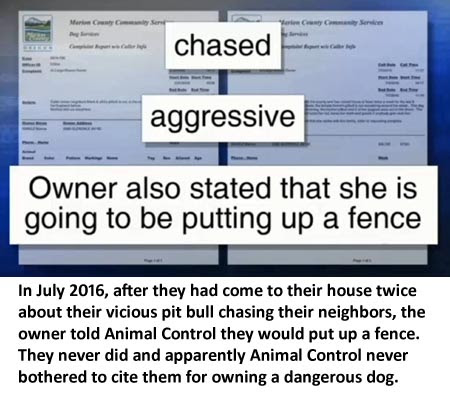 According to Marion County code, the keeper of the dog commits a civil infraction if their dog runs at large, disturbs a person with prolonged or frequent noise, scatters garbage, trespasses on private property, damages property, chases vehicles or is a female in heat at large.

The citations include fines, but it's up to the owners to comply.

However, having a "potentially dangerous dog" — a dog that menaces a person, attacks a domestic pet or bites a person — is considered a much more serious offense, Freeze said.

OK, so why wasn't the dog declared potentially dangerous back in 2016? This earns them a "bad cop" label.

A hearings officer can impose corrective action ranging from requiring a dog to be leashed and muzzled at all times to euthanizing a dog.

Freeze confirmed that dog services is investigating the attack. A dog control officer contacted the dog's owner and obtained a statement. They will make an assessment and take action most likely within the week, Freeze said. 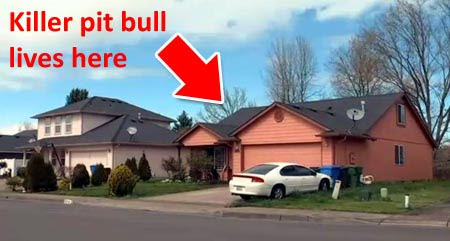 Until then, the dog will remain at the owner's residence in the neighborhood.

Reyna is making sure to avoid the house until she knows the case has been resolved. The yard of the home, which is near Washington Elementary and Waldo Middle schools, is not fenced, and she's worried the dog could attack a child.

Rojas said she's contacted the police, animal control, neighborhood watch and protective services to try and get some resolution and keep the dog from hurting anyone else.

"It's been awful," she said. "All the children were afraid."

Reyna used to own a pit bull too, and said doesn’t blame the breed.

“It’s how you train them, it’s the owner. Any dog can attack. Any dog can lash out and kill things. But if you’re sweet and gentle, the dog’s going to be sweet and gentle,” Reyna said. “For me, I don’t want any kids to get hurt. It’s right next to a school. There are two schools there and it needs to be dealt with and taken seriously.”

How many attacks have we read where the mother is crying saying they raised their dog from a puppy around the children and never saw the dog behave aggressively UNTIL THAT DAY IT DECIDES TO KILL THEM... 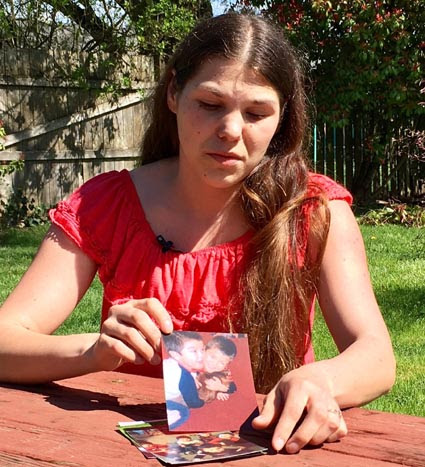 Reyna echoed Rojas' worries about their children and others who walk, bike and play in the neighborhood.

"This is so scary," Reyna said. "It could've been them instead of my dog."

IF MARION COUNTY ANIMAL CONTROL HAD DONE THEIR JOBS, FIFI WOULD NOT BE DEAD

Their ordinances detail how they are supposed to handle aggressive dog complaints. When the first complaint came in that the vicious dog was running loose and chasing people, they could have impounded the dog based on the witness statement and pursued a dangerous dog classification.

They didn't do that.

When the second complaint came in that the vicious dog was running loose and chasing people, they could have impounded the dog based on the witness statement and pursued a dangerous dog classification.

They didn't do that.

If they had done their jobs, the dog would have been declared vicious and the owner - in order to keep their dog - would have had to comply with a slew of restrictions (see below). If the owners didn't comply or if they dog continued to get loose, they could have held a hearing to get a judge to order that the dog be euthanized or at the very least, banished from the county.

They didn't do any of these things. And that is why this little dog suffered and died a horrible death at the hands of a vicious dog that should have been declared dangerous a year ago.

6.05.080 Impoundment of dogs.
C. Except as provided in MCC 6.05.120, the dog control director or manager shall determine whether a dog should be impounded pending the conclusion of the administrative process, and any appeal, because the dog represents a risk to the community.

6.05.190 Penalties.
A hearings officer may impose any corrective action including but not limited to the following:

1. Requiring that the dog be muzzled, leashed and under the control of a keeper at all times when off the keeper’s property;

2. Requiring that the keeper and the dog attend and complete a dog behavior and training class authorized by the dog control director;

3. Requiring that the keeper spay or neuter any dog that was the subject of the violation;

4. Requiring that the keeper repair, construct or maintain a secure enclosure for the dog subject to the approval of the dog control director;

5. Requiring that a dog be kept in a keeper’s residence during hours specified by the hearings officer;

6. Requiring that a bark collar be kept on a dog when the dog is outside the residence;

7. Requiring that the dog be relocated to a new location;

8. Requiring that the keeper’s rights to the dog be relinquished to Marion County, to a new owner as approved by the dog control director or to an approved adoption agency;

9. Requiring that the dog be euthanized after consideration of the factors outlined in subsection (C) of this section;

10. In the case of repeated violations by the same keeper, suspending the keeper’s right to own or keep a dog in Marion County for a period of time not to exceed five years as specified by the hearings officer; and

11. Requiring that the keeper take other corrective actions reasonably designed to abate any future violation.