CALIFORNIA -- Northern California prosecutors say a jury found a man who broke a Chihuahua dog's leg after the animal peed on furniture guilty of animal cruelty.

Peterson picked up Junior and threw him violently out of the house, breaking the dog's femur. 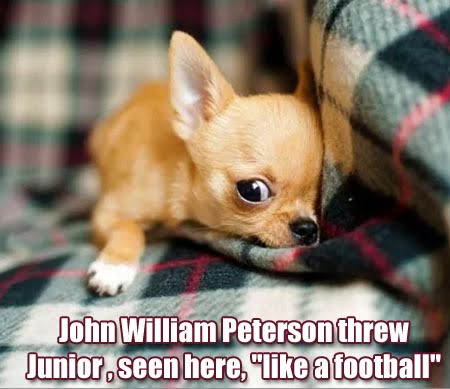 Reisig says Peterson then sent a text message to his son-in-law saying he had thrown the dog "like a football."

He says the Chihuahua has fully recovered after having surgery though his legs now have slightly different lengths.

Peterson is facing up to a year in jail and will be prohibited from owning or possessing animals for five years. - but he'll get probation like everyone else.

District Attorney Jeff Reisig said, "Our office seeks justice for all victims, human or animal. The dog in this case was a truly innocent victim and we are happy to get justice for Junior.”