PENNSYLVANIA -- Bensalem police have arrested a Levittown man after they say he killed two dogs less than a month apart.

Joel Davis, 23, of Falls Township, was arrested and charged with two misdemeanor counts of cruelty to animals. He was arraigned earlier this week by Bucks County Magisterial District Judge Joseph Falcone.

According to court documents, Bensalem police responded to the 1200 block of Neshaminy Valley Drive on March 3 in response to a report of animal abuse.

Once police arrived, they spoke with a woman who explained she had been letting her boyfriend, Davis, stay at her home for the last several weeks and take care of her two dogs. The woman told police that during a month’s span both of her dogs died while in Davis’ care and without explanation. 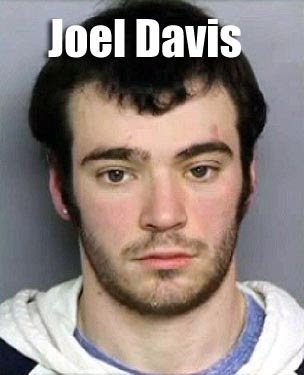 Davis allegedly told the woman varying accounts of how both of the dogs died, which led her to believe he was responsible for their death and prompting her to call police, according to a probable cause affidavit.

Davis was allegedly asked to watch the woman’s four-month-old puppy Leo earlier on March 3 while the woman went out with friends. Davis then called the woman to inform her that Leo had become unresponsive.

Court records show that when a neighbor stopped by the apartment to help they found the deceased dog on a small bath mat in the living room laying on its side.

The neighbor recalled to police that they had also come to help on February 5 when Davis was caring for the woman’s two-year-old puggle Sebastian and that the dog was also found deceased on a small bath mat and laying in a similar pose, court documents state.

The woman told police that she had confronted Davis about the death of both dogs but he originally denied responsibility until she told him that a nanny cam had been installed after the death of her first dog. At that point, Davis reportedly admitted to shaking and suffocating Leo.

Once in police custody for questioning, Davis admitted to Bensalem officers that he had slammed Leo on the floor in the bathroom, acknowledged that Leo was severely injured. He then suffocated the puppy with a blanket.

Davis also admitted to killing Sebastian the Puggle by sneaking up to the dog while he was lying down and stomping on his back, then suffocating him.

According to court records, Davis told officers that he killed both of the dogs because he was “jealous of the attention” that the woman showed them and felt that they “took away” from his relationship with her. Davis also provided a written confession to officers.

According to a humane society police officer with the Bucks County Society for the Prevention of Cruelty to Animals, Leo suffered a fractured liver likely related to abdominal trauma.

Davis was remanded to the Bucks County Correctional Facility on 10 percent of $500,000 bail.