(April 2017) Thailand: Despite being mauled by the Pit Bull they'd raised from a puppy, owners say they want it back

THAILAND -- A young woman narrowly survived neck bites as her anxious pit bull repeated its attacks on Monday. The animal was sent to an adoptive owner until it is ready to be returned to her. 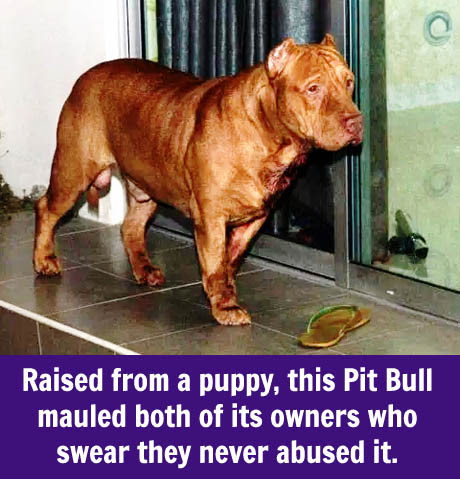 The dog was barking with some bloodstains on its body in the townhouse when rescuers arrived. Its owners Anont Thangpim, 26, and his wife Jenjira Khongchon, 23, were waiting in an adjacent house of a neighbor.

Rescuers first tried to use a noose to catch it but it was too strong and angry. Finally, they had to fire three tranquilizer shots to overcome it. The injured owners cried upon seeing their wounded pet put into a cage.

Ms Jenjira said they had bought the dog when it was a puppy. They were close until Sunday when the pit bull suddenly bit her neck and wrist while she was walking inside her house. The wounds required three stitches.

As she later opened the door to go out for wound cleaning Sunday evening, the dog attacked her in the neck again. Fortunately, her husband came to her rescue but he was bitten badly in the legs, Ms Jenjira said. 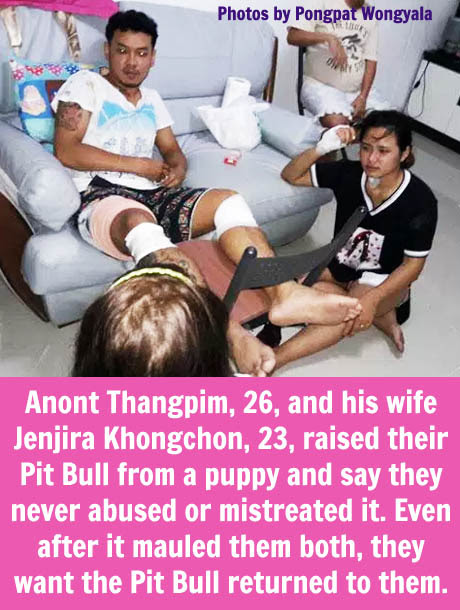 As the couple returned from a hospital, the dog remained anxious and they could not enter their house and had to call for professional help.

Ms Jenjira said they had never maltreated or abused their pet. She assumed the summer heat might have caused it to lose temper.

The rescue team said it would find a local adoptive owner with experiences and the couple could later take the dog back when everything was ready. Many pit bull owners already volunteered to adopt it, the team said.

This dog needs to be euthanized! Clearly you can't fix stupid.