Florida: Taylor Neefe, 27, was angry because his parents wouldn't let him into their house. So he had a temper tantrum, setting the house on fire and killing the family dog

FLORIDA -- A Deltona man whose parents would not let him into the house set the structure on fire, killing the family dog, Volusia County sheriff’s investigators said.

Deputies said Neefe set his parents’ East Gaucho Circle home on fire around 9:21 p.m. Monday. Flames were seen coming out of the home’s roof over the garage, eaves and front porch, a report said. 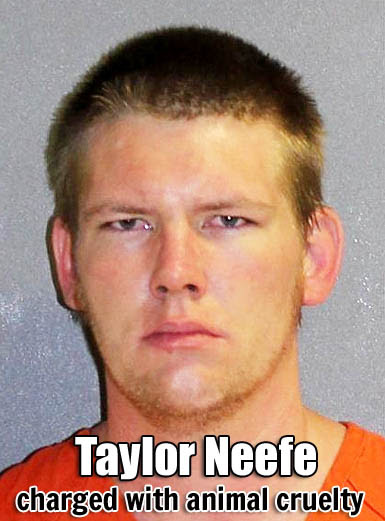 Neefe’s father reported that his son was possibly in the home so a deputy tried to enter the home but there was too much smoke and fire to attempt a rescue, investigators said.

Deltona firefighters rescued a dog from the burning home that paramedics but could not revive it.

Neefe was not in the home and was later located at a neighbor’s house, a report states.

Neefe’s father lives out of his truck in the front yard to be ready for emergencies due to his son’s criminal history and mental state, investigators said. Court records show he has been taken into custody for mental evaluation about a dozen times since 2011.

Neefe later told deputies he thought his parents were being murdered in the home after seeing a shadow in the door and, after not being able to get in, set the home on fire, the report said.

Deputies found burned trash and the melted remains of plastic patio furniture at the front door of the home, the report said.