India: After trying to abandon their starved horse, locals chase them down

INDIA -- A group of three including a woman were caught on camera while trying to abandon a tired and injured horse in a bush along the by-lane near Koonamavu market. The incident happened around 2 am on Monday.

Three people, two on a scooter and one riding the horse, were seen passing through the area on the CCTV recordings of a nearby shop. The locals who woke up to dog barks saw them abandoning the horse and fleeing from the scene. 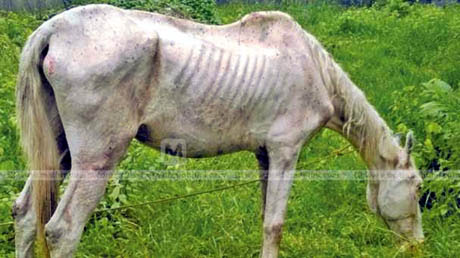 The locals informed the police and fed the collapsed animal who had fresh bleeding wounds and was probably tortured and starved. After some food and water the animal could almost stand up. The saddle was found abandoned in the nearby bushes.

The three people who had abandoned the horse returned to the scene the next day in a car but tried to escape seeing the crowd around the horse.

The locals chased the car for half a kilometer and brought the culprits to the scene who then admitted to having left the animal there but denied having abandoned her.

Their version was that the animal was misbehaving and they had let it at the desolate spot to let it calm down. A case has been registered against the owner of the horse, Eloor resident Asin. 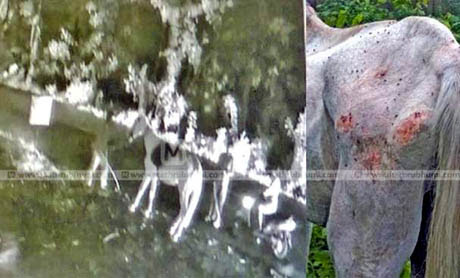 SPCA Ernakulam Inspector T N Sajith examined the animal and said that the wounds were fresh but couldn not confirm how the injuries happened.