Texas: This ad listing a pet kangaroo for sale perfectly describes the issues owners of exotic pets face when that cute, cuddly baby animal begins turning into what they are -- a wild animal.

TEXAS -- This ad listing a pet kangaroo for sale perfectly describes the issues owners of exotic pets face when that cute, cuddly baby animal begins turning into what they are -- a wild animal.

I give her credit for being so honest in her ad - she lists a lot of details about this kangaroo's behavior - a lot of which will turn off potential buyers. She didn't lie and say he was a great pet, loved kids and that they were moving or something and that that's the only reason she's getting rid of him. Instead, she was honest - people need to know that these animals are not like having a dog or cat. 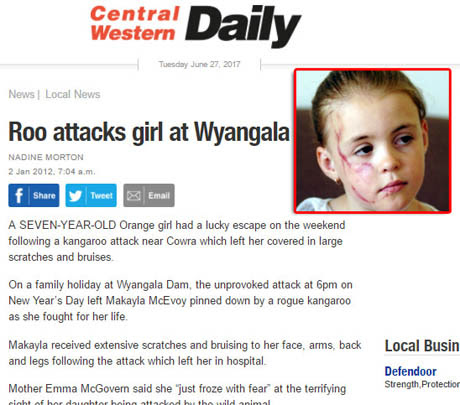 I am a bit concerned at her saying treat him like a human - remember the woman whose face was mauled off by her friend's chimpanzee? You can never forget that they're not just animals - but not really domesticated animals either. I'm glad her husband put his foot down and even she seems to accept that this growing kangaroo is too dangerous to be in a household with her young son.

Yes, children can be rough with pets. Children can even be bratty with them. But animals are like swimming pools to children -- an irresistible attraction. Far too often there are news stories where children wander outside and are attacked and killed by dogs that the parents say they 'warned' their child to stay away from. It's best to get rid of the potential problem now rather than wait until tragedy strikes. This child likes to rough-house with the kangaroo. The kangaroo, though, is maturing into an adult and likely sees this little boy as competition and someone to fight with. As it grows up, it'll likely challenge and attack anyone who doesn't let it do whatever it wants.

According to National Geographic:


The red kangaroo is the world's largest marsupial. Adult males can reach nearly six feet in height and weigh 200 pounds.

Red kangaroos hop along on their powerful hind legs and do so at great speed. A red kangaroo can reach speeds of over 35 miles an hour. Their bounding gait allows them to cover 25 feet in a single leap and to jump 6 feet high.

Male kangaroos are powerfully built. Like many species, male kangaroos sometimes fight over potential mates. They often lean back on their sturdy tail and “box” each other with their strong hind legs. Kangaroos can also bite and wield sharp claws, which they may do in battle with an enemy like a dingo. 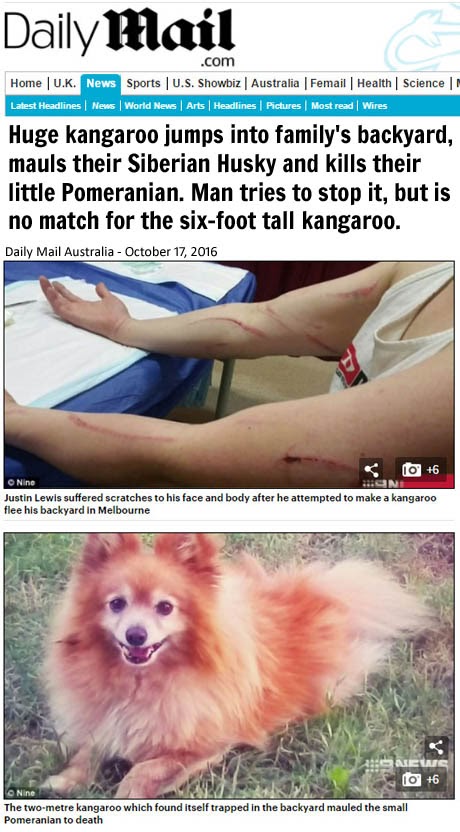 It is unfortunate, but I am going to have to sell my beloved Rocko. Rocko is an 18 month old Red Kangaroo Joey which I love very very much. He is a sweetie pie and like all juveniles, is spunky and wants to play, play, play. I have been doing my best to teach Rocko to not play with us (he can get a bit rough, but that is how kangaroos play), even going as far as getting him a punching bag and stand and a large stuffed animal to play with. He has been doing well and playing with those items when he gets in play mode, but my 4yr old just taunts him and instigates Rocko into playing with him instead. When Rocko stands upright, he is as big as my 4yr old. Combine play mode with Rockos sharp claws (vet said not to trim) & powerful legs, he hurts my 4yr old. My son just won't leave him alone despite Rocko's rough housing. My husband, who does not like to spend any money whatsoever refuses to put up a separate fence for either Rocko or our son so im left to make a decision that I do not want to make. Since I cannot get rid of the latter, it's Rocko that has to go.

Rocko has been with me since the day he was able to be taken from his biological moms pouch (7 months old) and from that day on, I became his surrogate mom, bottle feeding & carrying him everywhere with me in a pouch until he was too heavy to carry any longer. Even though he's at the weaning age, he still enjoys his bottle every day (hes down to only 1 bottle per day and its more of a treat/bonding thing, not as his main diet).

When not spunked up and wanting to play, he is very mellow and loving. He greets me every morning with a huge hug and kisses. It kills me to have to make this decision. It will take some time for him to adjust to a new home & mom as he sees me as his mom and he's just not going to understand when he is taken away by a new family. He will need some time to adjust and you will need to stick to the same regime as i have been doing to help him adjust. They are one owner animals and do not like crowds or meeting new people. He starts shaking in terror when he is forced to meet someone new (a friend visits, etc). I won't be able to say how he will act at first with a new family. He may be shy/scared at first or he may go all out into defense mode & throw a tantrum, so be patient with him & give him lots of love and alone time to adjust. No loud noises or other people around for a while until he is ready.

Rocko will need AT LEAST a half acre area with a MINIMUM of a 6 foot fence to roam. He loves to hop full speed around our yard so he needs plenty of space to get his exercise. He does well with our dog, cats & chicken but that is because he was raised with them. I cannot say how he will do with animals he has never met.

I have read that they do not like other animals (even other Roos) except for the ones they were raised with, but Rocko is still young so there's still plenty of time for adjustments to be made before he reaches adulthood (around 4 yrs old).

Rocko stays outside full time with access to our garage. If the weather gets really bad he is allowed inside the house and wears a diaper (large pull up with tail hole cut out). He sleeps in a dog bed with a stuffed toy which he likes to cuddle with.

Keep in mind that wherever Rocko is kept, you will no longer have beautiful flowers or plants growing (if applicable) as he nibbles at and eats flowers, leaves, grass.....they are purely herbivores. I planted Hibiscus and a vegetable garden in the yard just for Rocko to nibble on (no tomato plants as the stems & leaves are toxic to all animals, including humans). He also eats Kangaroo feed which the Steinhauser's in Alvin carries. He loves bread & crackers, etc (I will give you the full rundown of his care and likes - you won't have to worry, you won't be left guessing & you can always contact me with any questions/concerns on his care). I would also like to visit him from time to time.

I am deeply saddened on having to make such a decision. Rocko is my son and with him having to go, it will be like me losing a child. It hurts so much to even write this ad so please only SERIOUS INQUIRIES ONLY. Please do not contact me asking me why i am not turning him over to a rescue or sanctuary or bashing me for not doing so. If you read the ad fully, you will know that Roos do not do well with other roos unless they were raised by them. He needs a loving home with a family because he sees himself as a human. I am going to be very selective on where he goes, so please don't be offended if you are not chosen. Its just that i know Rockos personality and I know best on where/who he might be the best fit.

Please do your research on owning a kangaroo as a pet/family member before inquiring. Joeys are just like rambunctious toddlers & they get into EVERYTHING. i cannot even plant a tree without Rocko getting into the hole I'm digging and trying to eat the tree that i am trying to plant (& then digging up the tree after planting). If you have any garbage cans, small kennel enclosures, containers or barrels within reach of him, He will be inside them or have them knocked over and whatever is inside them will be all over the place.

Rocko is neutered and even though i can put a harness/leash on him, he Will not walk on one. It is just to keep him from getting scared & running off while not enclosed in yard. Gates must be LATCHED at all times as he is very curious as to what foliage is on the other side of the fence and will try to open the gates. He does not like water (on him) so he will need shelter from the elemets. He likes to dig holes so a sand box or something for him to dig in he would like.

I am asking $4k for him. He will come with his punching bag/stand, large stuffed animal that we hang from a tree for him to roughhouse with, large dog bed, small stuffed toy he sleeps with, harness/leash (even though he's almost outgrown them), couple of bottles, 2 special nipples/teats, his formula, kangaroo feed, something with my scent on it so you can have it around you while he is transitioning (he uses smell mostly to identify people). His vet is an exotic vet located in league city. He's never had the need to go yet since roos don't require shots, but i will give you the info in case the need to see a vet ever arises. 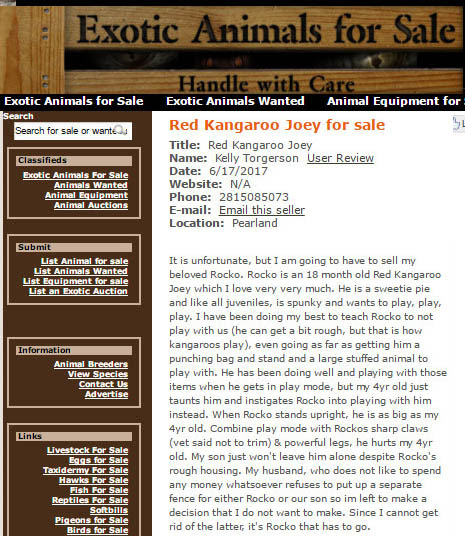 Thanks to Zara Corsten-Ibarra for pointing out this ad.