United Kingdom: Four kittens lucky to be alive after being rescued from well

UNITED KINGDOM -- Four kittens were rescued from down a well by a local builder from West Lancashire.

The kittens were found down a well on the premises of Woodlands Animal Sanctuary in Holmeswood by builder, Anthony McDerby, on Tuesday (June 20).

Luckily, this meant that they were able to seek immediate medical attention.

Anthony, a self employed builder who lives on the site of Woodands Animal Sanctuary, recognised the noise of a kitten cry and came across four kittens stuck over half a metre down an enclosed well.

The adorable kittens were admitted to the Sanctuary deeply dehydrated with their eyes stuck together with infection.

Upon arrival, they were given a bath, food and needed treatment for their eyes. 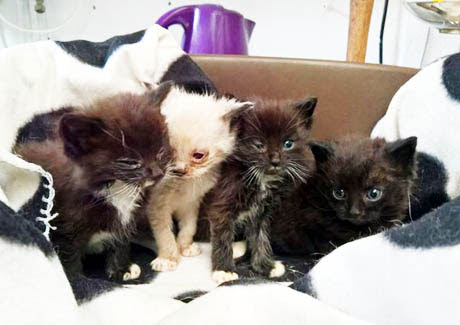 The kittens have since been checked over by Alison Speakman, a vet at Rufford Veterinary Group, and is hopeful that they will make a recovery.

Sadly, their mother was discovered later that day and had to be put to sleep due to illness. This meant that the infant kittens are now orphans.

As the kittens are far too small to be without their mother, they need to be fed at two hourly intervals from 6am until midnight.

Unfortunately, within 24 hours of rescue, one of the kittens, the smallest and most lethargic, needed to be rushed to the vets because they had taken a turn for the worst.

The latest from the vet is that the kitten is improving but, is still on a drip and so will stay at the vets until further notice.

The remaining kittens are all doing very well, and the team are really hopeful for them.

Amanda, an animal care manager at Woodlands Animal Sanctuary, said: “They are doing absolutely amazingly and the difference in them, in just these few days has been incredible”.

The kittens are set to be ready for adoption is around six weeks time, when they are old enough.

Woodlands Animal Sanctuary are also hosting a Wild Western open day on Sunday June 25, where you can meet all the animals, and enjoy a bucking bronco, gold hunt and shooting games.