(December 2017) Texas: Three years after David Hayes' Pit Bulls nearly mauled a man to death, officials give up trying to get them euthanized and hand them over to a former shelter employee

TEXAS -- Henderson County Attorney Clint Davis and Athens Attorney James Owen have agreed that three pit bulls that reportedly attacked and nearly killed a man in the Cherokee Shores subdivision in January 2015 WILL NOT BE EUTHANIZED.

Instead, the county is handing over these vicious dogs to an ex-shelter employee.

“The agreement was best for everyone,” Davis said. “It will save the taxpayers the cost of a jury trial and Amanda (Price) will provide a safe place for the dogs to live. This could have gone on a couple more years.”

A ruling the same year by Henderson County Court at Law Judge Scott Williams that the animals are dangerous was overturned when justices with the Twelfth Court of Appeals in Tyler ruled the owner of the dogs, David Hayes, should have his day in court. A hearing was scheduled for January 2018. 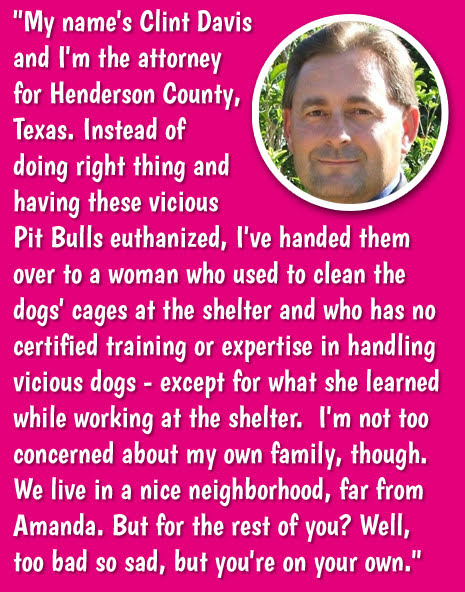 Owen, representing Hayes, argued his client was denied due process when he was not granted a jury trial. Owen had said he would like to have a 12-person jury hear the evidence against the three dogs.

The dogs began their ordeal when Mikel Christopher Kirkpatrick was found in a ditch covered with blood.

According to reports, a 911 caller said she heard a dog barking and someone screaming. Emergency medical personnel found Kirkpatrick with bite marks and cuts on on his upper body and arms and legs.

He was taken to ETMC in Tyler, where he spent a week in the intensive care unit undergoing multiple surgeries.

Reports indicated Kirkpatrick identified Hayes’ dogs as those that attacked him. At the time of the attack, Owen believed other dogs could have been responsible for Kirkpatrick’s injuries.

Amanda Price, who no longer works at the Henderson County Humane Society,  asked if she could take ownership of the three vicious Pit Bulls.

Clint Davis claims that Price is "experienced with rescue dogs" and had "developed a relationship with the pit bulls while working at the animal shelter".

“She really has an attachment to the dogs,” he said.

Davis said that before the dogs could be released to Price, she would have to meet certain requirements, including building a secure pen and providing insurance.

“She has done everything we asked her to do.”

Davis and Owen agreed that three years is long enough for the dogs not to have a permanent home.

“The only thing left is to have the dogs spayed and microchipped,” Davis said. “Amanda will make arrangements with the animal shelter to (take) the dogs to a veterinarian clinic here in Athens.”

DO YOU LIVE NEAR AMANDA PRICE? YOU SHOULD KNOW THAT SHE HAS THREE KNOWN VICIOUS PIT BULLS LIVING ON HER PROPERTY. THESE DOGS NEARLY KILLED A MAN IN 2015.

“Clint worked very hard to find a solution that he and I felt good about. The owners of the dogs are fine with the agreement. It all worked out for everyone.”

What about the taxpayers? Are they "fine" with this agreement? What about when these dogs escape and kill a child? What about when Amanda decides to up and move to Florida or Ohio and takes these vicious dogs with her - where there are NO restrictions? What if Amanda decides she doesn't want them anymore in a year or so and sells them on craigslist?

Will Henderson County Attorney Clint Davis or Athens Attorney James Owen be there to make sure she never sells them, lets the fencing fall apart, never moves, never lets the liability insurance lapse...?

Of course not. They've collected their paychecks. They both live in nice neighborhoods that don't have three vicious Pit Bulls living next door to them. They've moved on to other things. Meanwhile, every person and animal in Henderson County are in danger.

Davis has said that since the incident in 2015, state lawmakers have addressed the situation in a manner aimed at trying to alleviate some of the issues with having a prolonged legal case involving dangerous dogs.

As of Sept. 1, 2015, Texas law allows a person the right to a jury trial, but specifically says that if a person requests a jury trial, the court “shall determine the estimated costs to house and care for the impounded dog during the appeal process and shall set the amount of a bond for an appeal adequate to cover those estimated costs.”

Henderson County officials cannot be reimbursed because the law was passed almost nine months after the alleged attack.