ILLINOIS -- No changes to Waukegan's animal control ordinance are on the horizon despite a review following an attack by two pit bulls that left a smaller dog with severe injuries.

That decision was disappointing to Hailey Schueneman, who has pushed for the city to tighten up its ordinance following a January attack on her grandparents' dog. 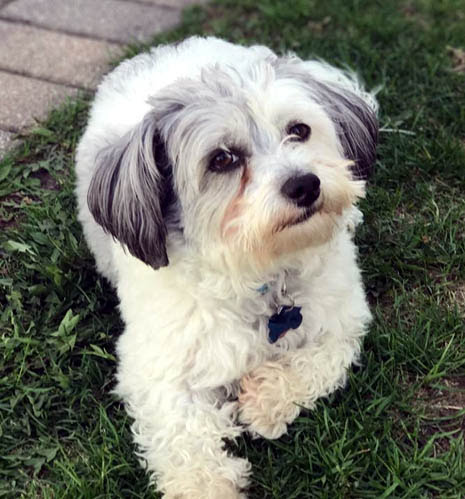 THIS IS GUS BEFORE THE PIT BULL ATTACK 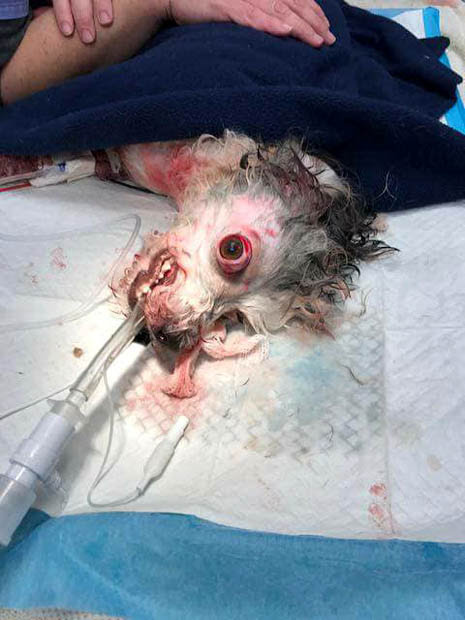 THIS IS GUS AFTER THE PIT BULL ATTACK

The situation "feels so unjust," said Ald. Lisa May, 9th, whose ward includes the Schueneman's home and who also chairs the City Council's judiciary committee.

But after speaking to the city's attorney, the police chief and the sergeant who runs the animal control division, she said they reached the conclusion that the the code is sufficient.

May said she plans on setting up a meeting with Schueneman and the police chief to discuss the incident further, but at this point, she doesn't see what changes could have led to a different outcome in this case. 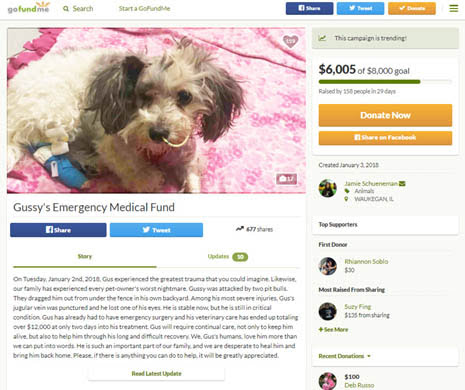 "Everyone feels horrible about what happened to Gus, the poor dog that got pulled from his yard," May said, referring to the Schuenemans' dog.

The incident occurred on Jan. 2 when Gus, who is owned by Greg and Jamie Schueneman, ran to the edge of their fenced yard on the city's north side, as a man who lived nearby walked past with two pit bulls on leashes.

The small dog was apparently pulled underneath the picket fence onto the sidewalk, where one of the big dogs started to maul the smaller dog, Jamie Schueneman told the News-Sun. 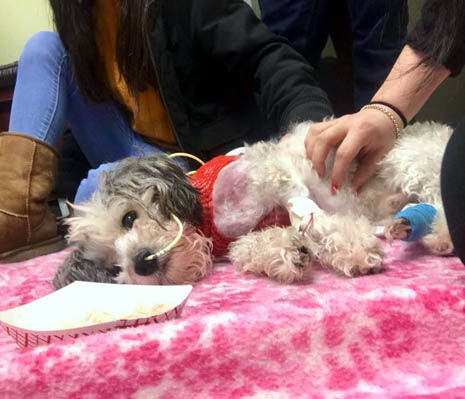 "My husband tried beating (the larger dog) in the head to release Gus, and my granddaughter screamed," she said. Her husband's hands were cut from trying to get the big dog to release Gus.

The dog was treated by a veterinarian in Grayslake, where he underwent surgery and was racking up medical bills of $12,000, according to a Gofundme page set up by the family.

The family has filed a civil lawsuit against the pit bulls' owner, Hailey Schueneman said. 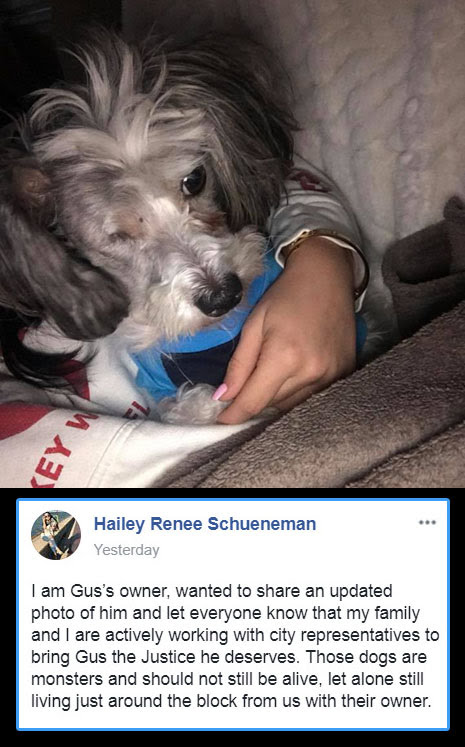 CITY BLAMES VICTIM FOR $12,000 IN INJURIES
An investigation by the city found that the smaller dog "provoked" the Pit Bull before the attack by barking at it and running to the fence, according to police Sgt. Dennis Rosch.

The question of whether the pit bulls would be deemed dangerous came down to whether they were provoked by the smaller dog. 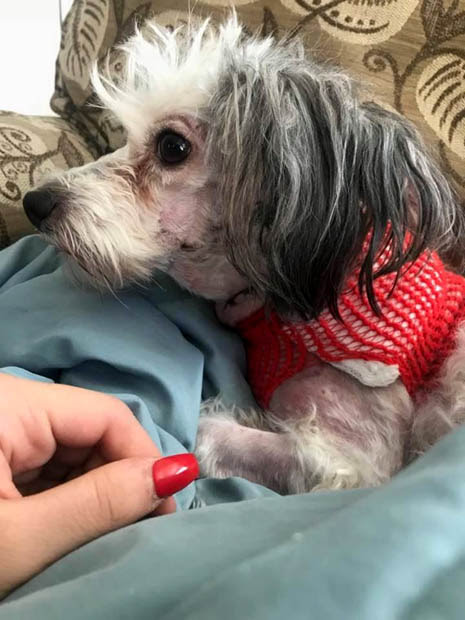 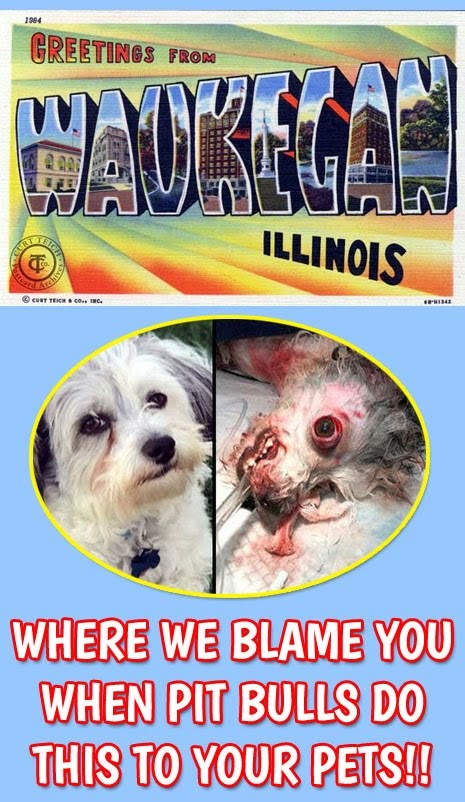 The city's ordinance is "very vague" in parts, said Hailey Schueneman, pointing in particular to a lack of definition for what constitutes provocation.

She said she doesn't think a dog in its own yard and with its owner present rushing to the fence should be considered provocation.

First of all, the owner is required to control their dog while leashed. The little dog was inside its own fence. Obviously the Pit Bull owner cannot control their mauler; otherwise this little dog would not have been grabbed and pulled underneath the fence.  These people are morons. 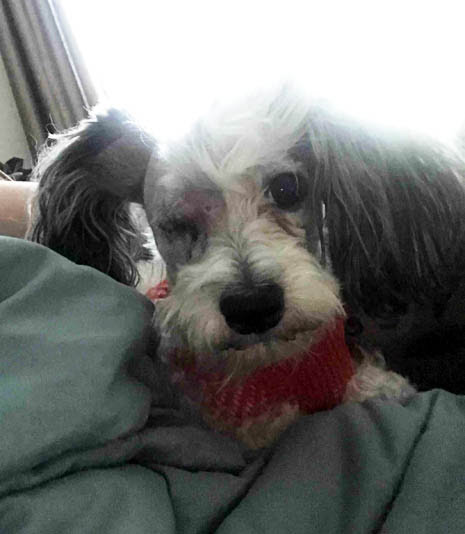 PIT BULL OWNER BLAMING VICTIM
She also disputes that the dog poked his head through the fence's slates, which she said contributed to the finding that the pit bulls were provoked.

Hailey Schueneman said after the meeting she would like the ordinance to also include more guidance about how animal control conducts its investigations, because she felt the investigation into the January attack, "was not conducted thoroughly" and relied just on the accounts of the two owners.

"I know why the dogs were found to be not dangerous, but I also feel like there has to be something more," she said. 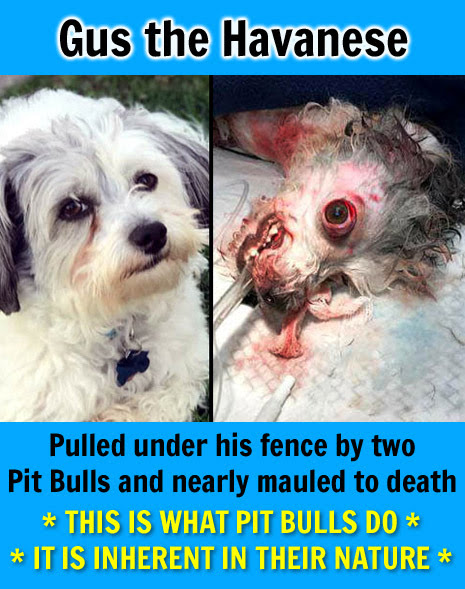