Missouri: Kyle Williams, 18, and Jordan Hall, 19, are jailed for four years after posting a video of themselves laughing while killing a kitten by dragging it behind their car

** WARNING: There is a graphic photo of the cat at the end of this post **

MISSOURI -- Two Missouri men who sparked outrage by tying a kitten to a car's bumper and dragging it to its death were sentenced Friday to prison.

Kyle Williams, 18, also from Branson, was sentenced to four years for animal abuse and three years for armed criminal action, to be served consecutively after posting footage of his cat's death to Facebook.

Jordan Hall, 19, of Branson was also sentenced to four years behind bars for animal abuse. 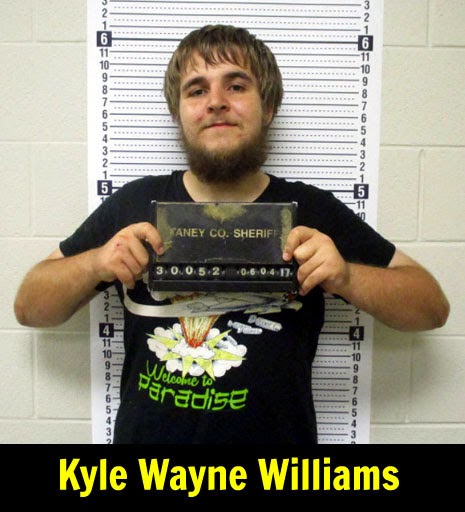 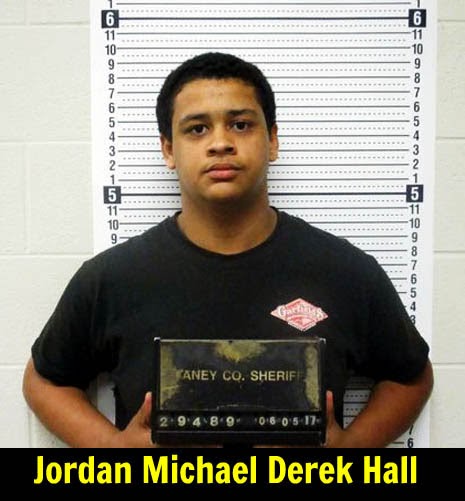 According to the Taney County, Missouri prosecutor's office, Williams will also serve five years for 'possession of a weapon in a county jail, relating to the sharpening of a spork into a 'shank'.'

The two had plead guilty to animal abuse charges, after the horrifying incident.
It started last June when, according to court documents, a video was posted to a private Facebook group.

'Keep going. Don't stop. He's almost dead.'
The video shows a gold Jeep accelerating while people laugh and watch the kitten's plight, with one person filming the incident from the trunk.

The kitten's tiny legs couldn't keep up with the SUV, and after being dragged for several laps, the little animal lay dead on the asphalt.

"Dude, kill his ass," one person says in the video after the cat appears to lose strength and start bleeding.

At one point, the vehicle stops, and the people behind the camera discuss the "semi-alive" kitten's vitality and whether to "slam (the cat) into the ground, kill him." 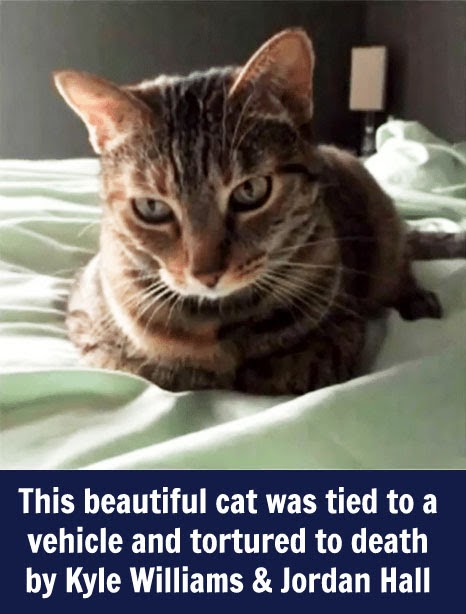 "Should we put him out of his misery?" one person asks.

In response, the vehicle speeds up and the laughs start again.

Later in the video, the SUV stops and starts once more. A person in the trunk can be seen jerking on the rope so the kitten goes airborne and bounces off the pavement.

The kitten was in bad shape at the end of the video. Before the camera cuts off, one person continues jerking the rope to move the dying cat's head up and down like a macabre marionette.

"Shake your head for me if you're dead," the person says.

The video showing the torture death of the cat is nearly five minutes long. 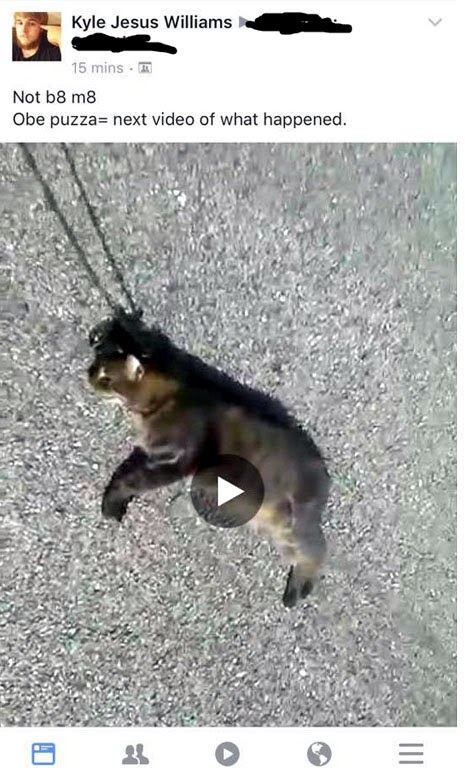 According to the Kansas City Star, members of the group Cellulites: Salvation 'were furious after he allegedly posted a photo of himself next to the tortured, bloodied kitten, one eye popped out of its head, the newspaper reported.

The caption allegedly read, 'Try to guess how I killed my cat, bet you can't.'

Members of the private group then figured out who Williams was through his social media activity, and contacted police.

'He posted it in the wrong group,' one group member wrote. 'Animal cruelty is not okay.' 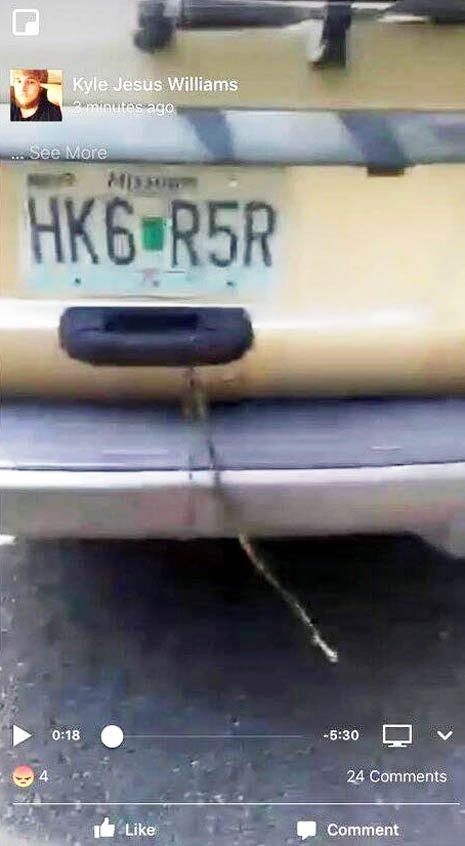 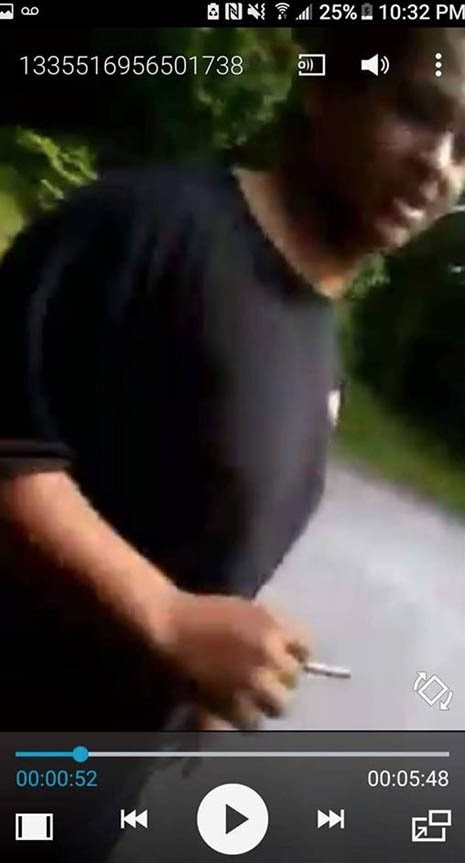 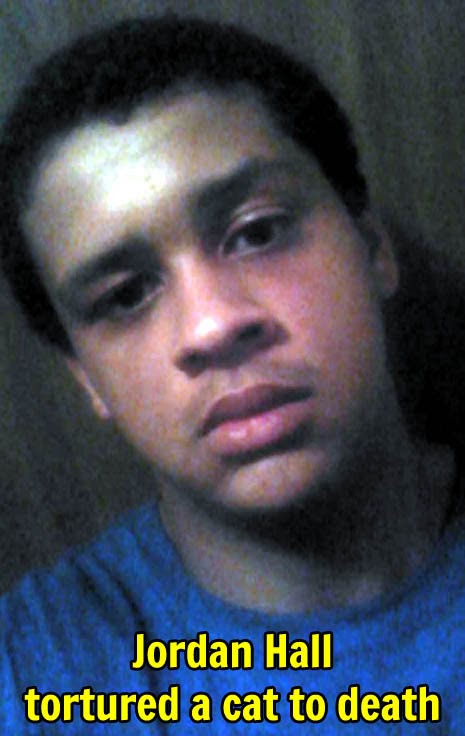 After the sentencing, Taney County prosecutor, Jeff Merell thanked the people who reported the crime, posting on Facebook.

He said: 'We are satisfied with the sentences handed down today by the Judge for this senseless act of depravity against a helpless kitten. We appreciate the help of good Samaritans in our digital community in reporting this crime as it might have gone unpunished without their assistance.' 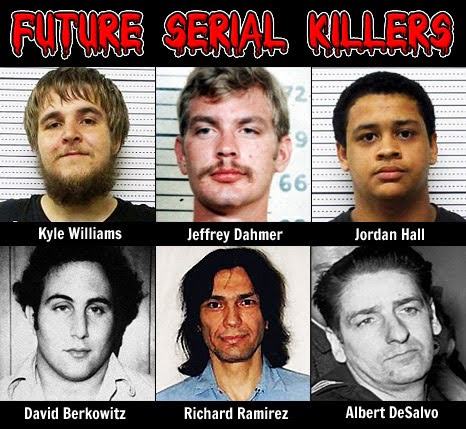 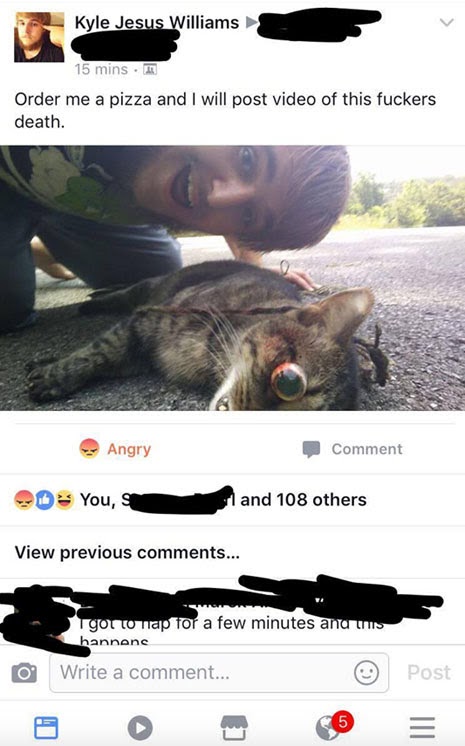