South Carolina: Labrador mix rescued after she was seen limping and dragging a leg-hold trap on her crushed foot

GREENVILLE, SOUTH CAROLINA -- An online video of a dog being rescued after her foot was crushed in a metal coyote trap has gone viral.

The video shot by California animal rescuers Eldad Hagar and Loreta Frankonyte, with Hope For Paws, was posted March 20 on YouTube and Facebook. 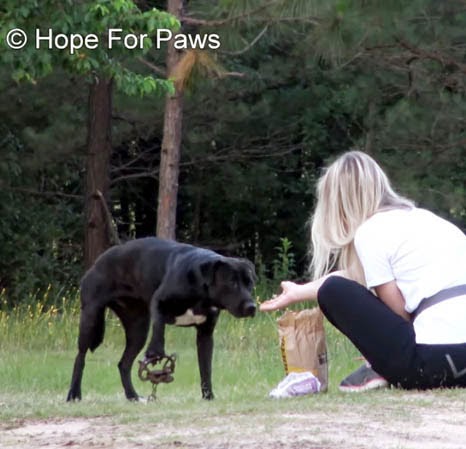 Someone in Gaston in Lexington County called Hagar and told him that the black Labrador Retriever mix had lived in a forest for about a year before she stepped on a metal foot-hold spring trap intended for a coyote.

Steel-jaw spring traps are legal in South Carolina and several other states. 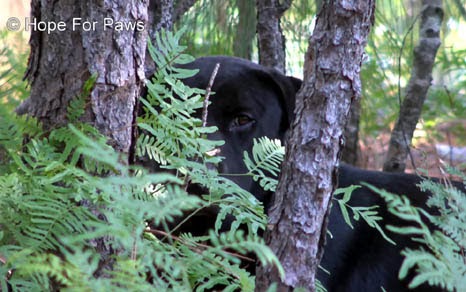 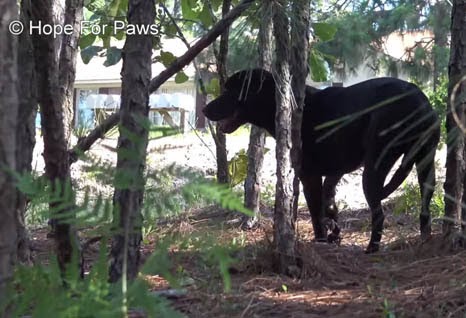 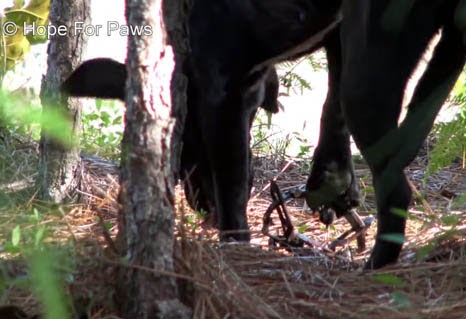 Animal control officers had been trying unsuccessfully for five days to trap or catch the dog, which was clearly in severe pain, so someone called Hope for Paws for help.

Hagar and Frankonyte flew in from California and searched along with officers for a full day. They thought the dog might be afraid of the officers, so they asked to search alone on the second day.

They set a humane trap for the dog, but she avoided it. She had no human contact for a year, so she would not allow anyone to get near her, but even from a distance, it was clear the heavy trap she was dragging had crushed her right front paw. 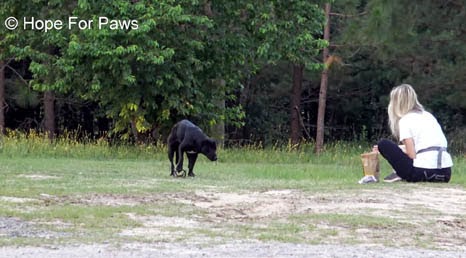 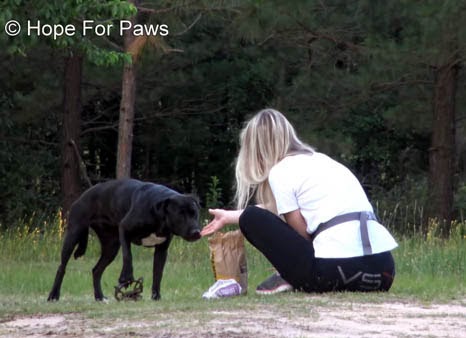 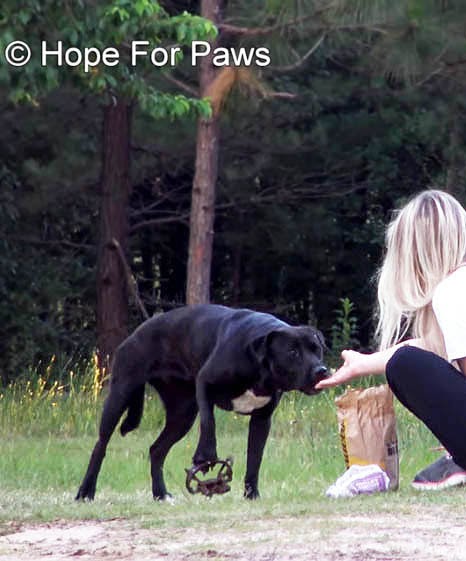 Finally, when they got close enough to the dog, Frankonyte sat on the ground and tossed pieces of cheeseburger to her, talking reassuringly for more than two hours as the dog inched closer. But suddenly the dog got spooked and retreated into the woods.

Hagar had several soccer nets that he used in captures in California shipped to him overnight. They recruited volunteers who helped spread out the nets around an area where the dog had been spotted between some trees and a building. The volunteers then closed in on the dog, cornering her so that Hagar could snap her with a noose. 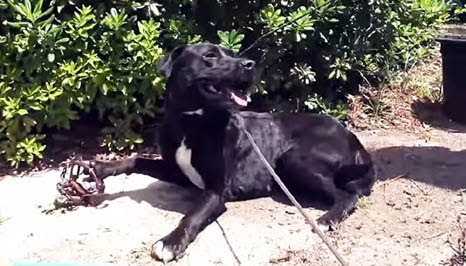 They rushed the dog to a Lexington County animal hospital.

The dog was anesthetized, and the rusty trap was pried off her foot. While she was at the animal hospital. It was also discovered that she had heartworm.

Hagar and Frankonyte stayed another day to be sure the dog which they named Hermione, was medically stable, before making the three-day drive across the country. They stopped each day to have a veterinarian change the bandages. Hagar said that every day, Hermione would lose more bone from her decaying foot. 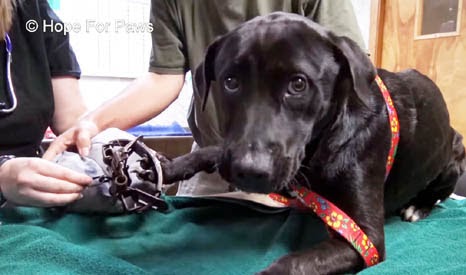 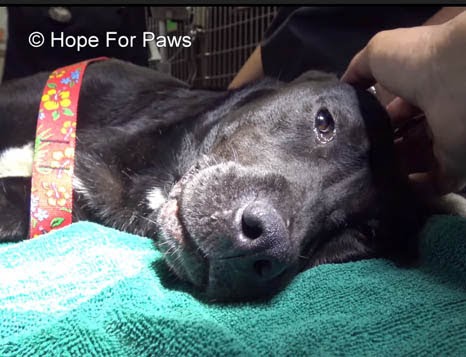 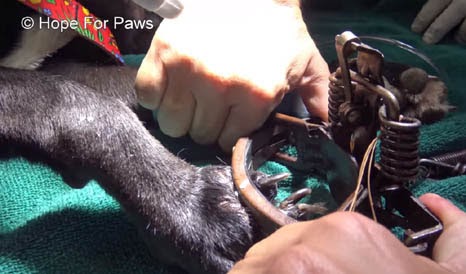 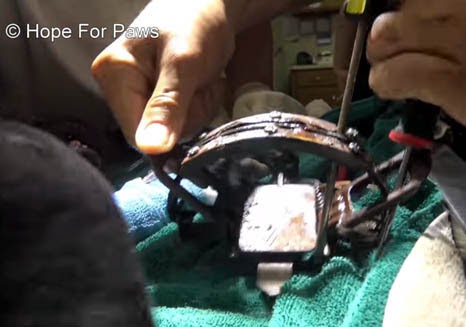 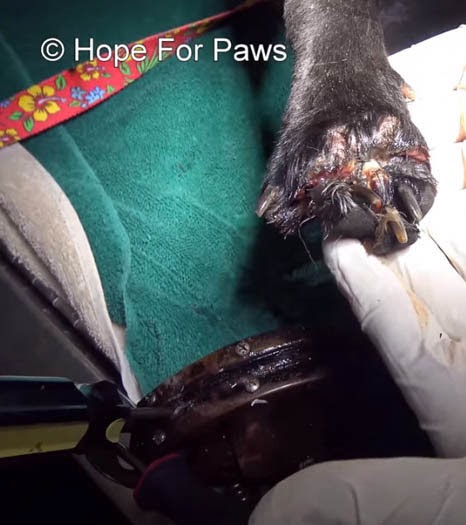 They took Hermione to Dr. Robert Olds, a veterinary surgeon in West Los Angeles, who performed two reconstructive surgeries on her foot.

The healing took a couple of months, but when the bandages came off, Hermione began to immediately to walk and even trot around on her reconstructed paw while continuously wagging her tail.

She was treated for several months for heartworms, but Hagar announced last week that Hermione is completely healthy and ready to be adopted.

Hagar asked those who saw the video and who follow him online to encourage changing laws to outlaw metal spring traps. 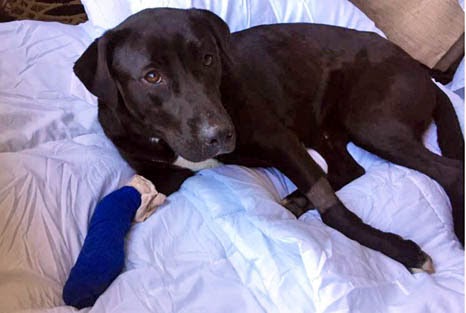 CRUEL AND BARBARIC LEG-HOLD TRAPS
According to analysis by the Law Library of Congress, more than 100 countries worldwide ban steel-jaw traps.

The United States is not one of them.

Their use is banned or restricted in several U.S. states, including Arizona, California, Colorado, Florida, Massachusetts, New Jersey, Rhode Island and Washington.

In South Carolina, steel-jaw foot-hold or leg-hold traps can be used without a license, with the only stipulation being that traps must be checked at least once daily, from two hours before sunrise to two hours after sunset.