(March 2018) Florida: Boy, 13, who'd played with his friend's Pit Bull on previous occasions, is suddenly mauled by it

BREVARD COUNTY, FLORIDA -- A 13-year-old boy is recuperating at home after being attacked by his friends’ dog named Ace.

On Thursday, the teenager was playing basketball with friends on St. Andrews Drive around 6 p.m.

When one of the kids that lived in the home opened the door, Ace ran out and approached the 13-year-old, deputies said. 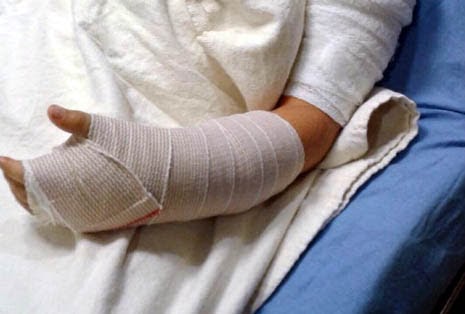 The boy who’s familiar with the dog, bent over to pet it. However when the dog started growling, the teen tossed the ball to Ace thinking the dog wanted the ball.

Instead of running after the ball, the Pit Bull began mauling him.

The boy was bitten at least 25 times, his father Brian Keegan said. The boy’s hand is in need of reconstructive surgery.

According to Keegan, it’s going to take months for the teen to be back to normal. Also, since the dog owner failed to provide up-to-date rabies vaccine records, the teen is going through rabies injection treatment.

“On his right side there is a big chunk that was taken out,” Keegan said.

AUTHORITIES DID NOTHING AS PIT BULL KEPT ATTACKING
Tod Goodyear from the Brevard County Sheriff’s Office dug up the dogs past.

Shortly after the attack the owner surrender the dog to Animal Services and it is now in quarantine.

“This is something where the dog got lose and unfortunately it bit someone,” Goodyear said.

The dog owner will have to pay hundreds of dollars for four citations including not being able to produce current rabies vaccine documentation and for the dog biting someone causing severe injury.

If the dog is deemed dangerous, Brevard County Sheriff’s Office officials say, the Pit Bull might be euthanized.

So the owner gets to have a dog that for three years continues to attack people and pets. Then, after the latest, most vicious attack, the owner gets to surrender the dog, with no criminal charges, and is free to go on craigslist and buy another Pit Bull today. This is lazy policing. What about all the victims? If I were this boy's parent, I'd be suing for the police's failure to protect their son from being mauled by a known vicious dog. 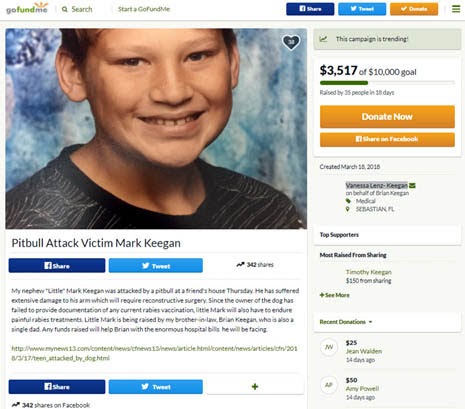