LOUISIANA -- The Calcasieu Parish Sheriff's Office arrested a Bell City man Sunday, suspected of shooting and killing four cows an one bull with a semi-automatic rifle.

Matthew Gilles LeBlanc (aka Matt LeBlanc), 23 (DOB 05/14/1993), was arrested on five counts of aggravated cruelty to animals, possession of drugs, possession pf drug paraphernalia and illegal carrying of weapons in the presence of drugs.

According to Kim Myers, spokesman, the sheriff's office got a call on May 23 about dead livestock in Bell City. Three livestock owners were affected. 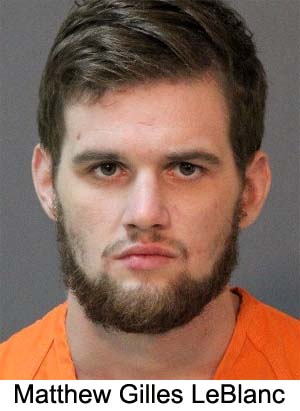 During the investigation, detectives learned that LeBlanc had been seen in the area on an ATV on May 22.

"When the deputy questioned, LeBlanc he stated that he was shooting an AR-15 in that area," Myers said.

After further investigation, a warrant was issued for his arrest on May 29 and while serving it, deputies found LeBlanc was in possession of liquid Xanax, drug paraphernalia and a firearm.

He was booked into the Calcasieu Correctional Center on a total bond of $92,500.

The investigation is ongoing with more charges and arrests are possible, Myers said.