Alabama: Two Bloodhounds mauled by pit bulls. Vet "said that this was the worst that he has ever seen"

ALABAMA -- I need prayers for my dog (Trader) this morning. A couple of pit bulls laid his side open pretty bad. And the owners did not have enough decency to let us know that they had gotten on him. He is on his way now to see the vet.

Chris Brasher - let me tell you what i did,my next door neighbors pet killed my family pet,soooooo lets just say i believe he lost his family pet as well. 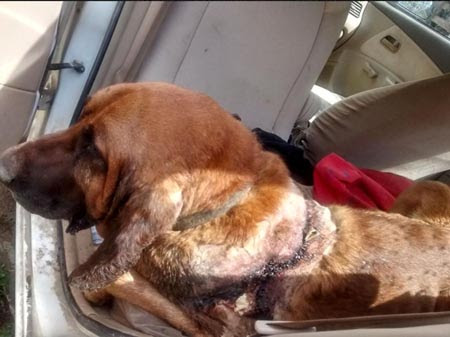 Teresa Charlene Bray - I'm getting a copy for them. I am not sure how to handle it yet bc I'm still so mad I can't see straight. The guy that owns them is staying with his folks and so they brought their dogs with them. I wasn't aware that they were in the neighborhood, much less running around freely. My dogs get out of our chain link fence from time to time but we've never had any complaints. They don't bother anything. They put those pits in a pen after the fact. Being new to the neighborhood you would think they would've​ have done that to begin with. Now Trae is getting stitches and will have to stay at the vet until Monday at least

Teresa Charlene Bray - Wow. Tracker got tore up a little bit too. He just came back in. His front leg has bite wounds and is swollen, his back leg also has been bitten. Nothing like his brother is injured thank God.

Melody Smith - I'm not trying to start issues. I don't even live over there, but I definitely don't want there to be any confusion. Your dogs do roam free and defecate in my parents yard and come and sit in their yard a lot. My brothers dog stay inside a kennel, but like everything else in the world, it's not perfect and they were able to get out. My mother informed me that she did contact you and you guys are supposed to set up a time to talk.

I'm sorry to hear about what happened to your dogs and it's not something I would wish on anyone. I would definitely consider not letting your dogs roam free from this point on.

Teresa Charlene Bray - Yeah the damn dogs​ were put in a kennel after the fact, and they didn't even bother to tell anyone about the dogs getting into a fight. So get your facts straight. Your niece plays with my dogs and my dogs have been in the area for 7 years and not ever harmed one thing. They are big babies, loveable animals. Not blood thirsty monsters.

Melody Smith - They were in the kennel before hand. I'm not going to argue this with you and there is no need to cuss. And yes my parents talk to Daniel last night and he said everything was okay. 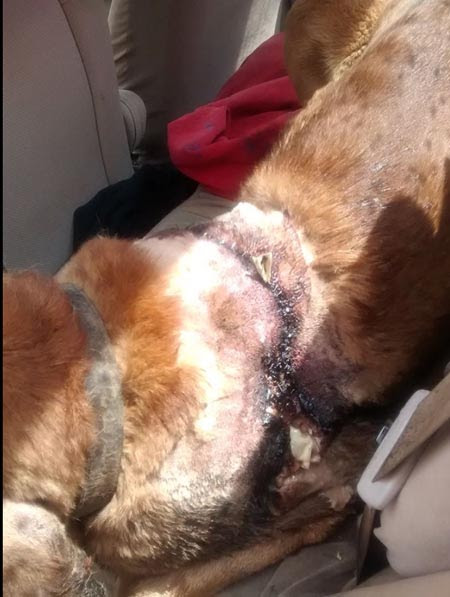 Melody Smith - Like I said I wasn't trying to cause issues, but I don't appreciate people stretching the truth. I'm not saying my brother shouldn't be held somewhat accountable, but I want the truth to be out. Not a one sided story.

Melody Smith-  And those "blood thirsty monsters" don't hurt anyone unless they feel their family is threatened. Just saying.

Teresa Charlene Bray - We will pray for those children you have around those dogs and any other dogs that come in contact with them.

Melody Smith - I really don't need you to pray for those children. And *I* don't have them around them as I don't live there. It's very disrespectful the way you are talking considering my mother considered you a friend.

Teresa Charlene Bray - No, Dan said that it was not Jimmys fault and he had no problems with him. Now I am upset enough about my dogs and was asking for prayers not opinions. Thank you.

Melody Smith - And please don't bring my nieces and nephews into this as they are innocent children and have no involvement.

Melody Smith - I didn't give you an opinion. I gave you a fact. But alright. No harm no foul. Have a good day.

Teresa Charlene Bray - Your mother can speak for herself I do believe it is time for you to worry about the problems where you live. The truth and the law will prevail. Have a good night

My Trader is a Miracle Baby. The vet said that this was the worst that he has ever seen and hopes he never has to do another one like it.

We're so fortunate that he is still alive. They had to cut out chunks of his shoulder and all bc it was already dead. Although once he came home the following morning, the wound had appeared greater than 7 days. Had maggots in it which was probably progressed by the heat. He has a drain in it which gets removed in one week and the stitches another week later. His neck and ear were also stitched. He never gave the vets one minutes trouble. They said he was a sweet baby. Thank you God. Total bill $814.15 for Traders treatment. Will post his brother Tracker's ordeal after I take pictures. Both boys are home again after one hell of a busy day.

Sharon Bowden - That is awful; I looked at your older posts and saw that 2 pit bulls did this to him. I would have a heart attack.

Brenda Bray - I am glad your babies are home. The owners of the pits need to pay some or all of that. That is horrible. God bless the sweet boys. I love all dogs you know that, and I hate to see anything happen to any dog, but when you have dogs that kill or maim other dogs they are dangerous. Usually they attack people, and I hate that anyone would train dogs to do such a thing. You need to get a police report it would help in case anything else happens. Again, I am sorry for what has happened. I know you are still tore up, but hang in there, I love you. We will be praying for the babies. 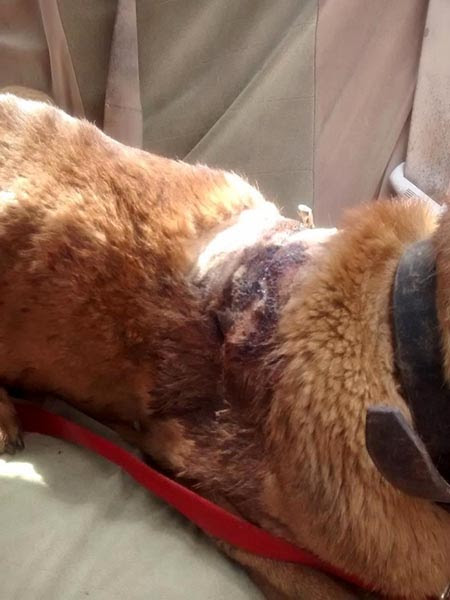 Teresa Charlene Bray - Yes, I am still so angry, not to mention heartsick. God was watching and we're very fortunate he lived. Both actually. They are sweet big babies. Kids can play with them. The only thing is trader will slobber you to death. Lol. Not a mean bone in their bodies.

Teresa Charlene Bray - Thank you Brenda. It has been a long weary day but I can rest some knowing their home. I am going to gather photos of my dogs injuries and do a report.

Also, I am going to do a petition to have pit bulls banned in this community. Those dogs were kept inside with the owner's kids. They lived in a trailer park. I could not live with myself if anyone or anything else gets hurt by them. We have a total of 6 pits around our home. The two new ones, three in back and one on the other side.

The last one mentioned has never been a problem. But you recall several years ago when Harley (our potbelly pig) was attacked by two others?

I am not going to tolerate anymore. Good thing I have not got a weapon and I am a member of the humane society but enough is enough. 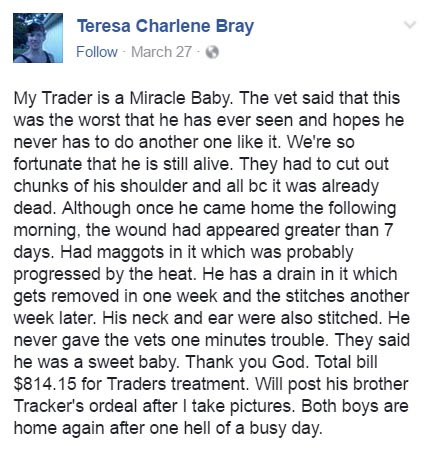 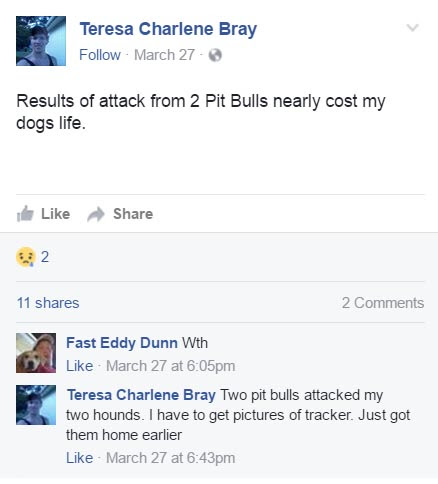 Teresa Charlene Bray posted Yesterday at 8:34am ·
One of Trackers wounds from the pit bulls attack. Post more later. He was luckier than his brother. 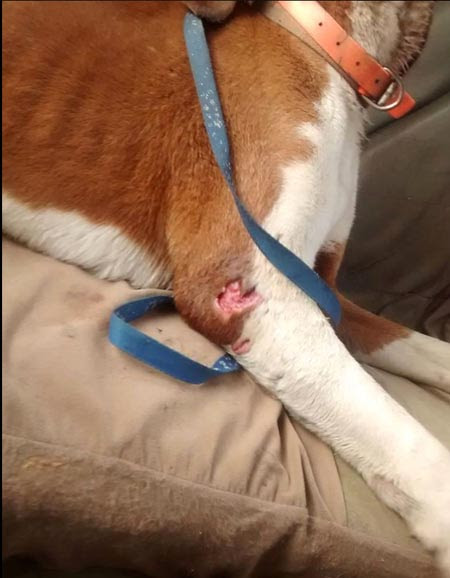 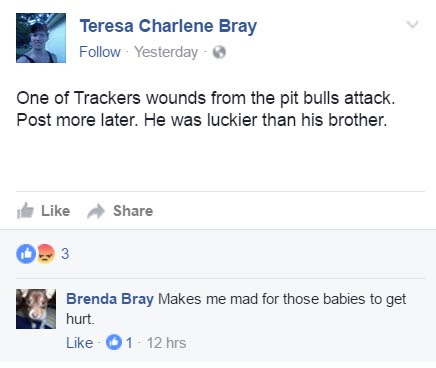