ARIZONA -- A Buckeye couple isn’t giving up on justice after their dog died while staying at a Valley boarding facility.

Meaghan Pilcher and her husband dropped off their 2-year-old German Shepherd, Zero, and their Yellow Labrador at the Desert Oasis Farm and Dog Boarding near Estrella Parkway and Elliott Road last month.

“It’s bad enough to leave your dog, you’d like to take them with you,” Pilcher said. “’But you never in a million years would guess anything like this would occur.” 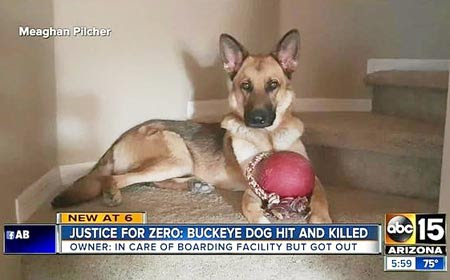 Pilcher said Zero escaped from the facility and was struck by a car – sadly, Zero did not survive the accident.

Since the incident occurred, the family has urged the Maricopa County Sheriff’s Office to investigate the dog’s death. They’ve even created a “Justice For Zero” Facebook page in hopes of rallying the community together to get law enforcement’s attention.

Pilcher's petition page says the owners of the facility have changed their stories several times as to what actually happened and never notified them when their dogs escaped the property.


Both Zero and Keizer were found miles from the boarding facility's location in a different city.

Zero was hit by a car Friday morning February 17, 2017 and killed at 6:38 AM in Goodyear, AZ. The accident shut down S Estrella Pkwy in Goodyear, AZ (greater Phoenix, AZ area) for a while in both directions. Zero suffered a broken back and head injuries, among many others. He quickly succumbed to the trauma and passed away.

Zero’s brother, Keizer, was missing without his collar on. Keizer is 11 years old with arthritis medication and cannot move faster than a jogging pace. Keizer was missing for approximately 2 days before he was found and brought to safety. When he was finally recovered, he could barely move from exhaustion and had to be examined by a veterinarian. He was dehydrated and had limited mobility in his joints. Unfortunately, Zero did not live through the experience and will not see his second birthday.

On March 15, the page posted a status beginning with “YOU HAVE TO SEE THIS!”

The post explained that a woman from MCSO responded to their persistent requests for an investigation and stated in the email that Pilcher needs to “get her stories straight” and that Zero’s death isn’t a case of animal cruelty. 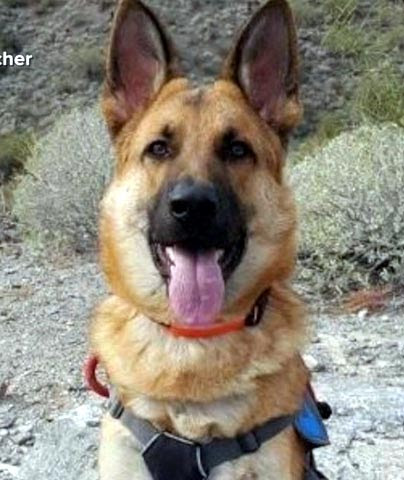 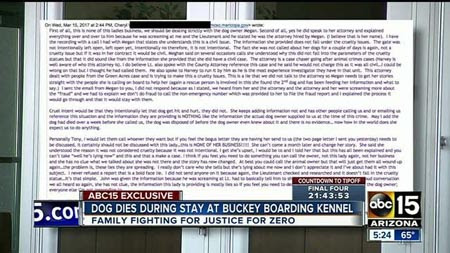 “Regardless of what happened, the dogs never should have been able to get out,” Pilcher said.

It is absolutely appalling how this MCSO employee spoke to this person in the email. It is equally appalling that this MCSO employee would speak about a respected attorney like this. No matter your personal feelings, you act like a professional - in court, in person, and in emails sent to people who merely want MCSO to do their jobs and conduct an investigation.

Internal Affairs needs to conduct their own separate investigation into this employee. There's a saying that when you tarnish one badge, you tarnish them all. I hope this is a civilian employee because I'd be very, very disappointed to find that this is a law enforcement officer who behaved this way.

However, this week MCSO decided to open up a formal investigation into the death of Zero. According to the administrator on the “Justice For Zero” Facebook page, they’re also looking into the employee who sent the “horrid email” a recent post said.

The couple's lawyer said there are no monetary motives behind this.

"My clients aren't looking for any money here...," the lawyer said. "What we're looking for is a criminal investigation to be done."

If the owners of the facility had simply called the owners as soon as the dogs escaped, this wouldn't have blown up like it did. Yes, the dog may have still been hit and killed by a car, but there wouldn't be all these concerns of a cover-up, of false reporting, of something sinister going on.

Thankfully, despite the repeated blow-offs they received from the Maricopa County Sheriff's Office, there is now an investigation and hopefully someone who works there gives a you-know-what about animals. Sheriff Joe couldn't have been the only animal lover at MCSO.

This link details the alleged lies and false reporting claims that Joe Arismendez made to MCSO. He said he had been bitten by their Yellow Lab. However, the dogs had already escaped and had been running loose. False reporting in many states is a Felony. Also, what is the true story of the dogs' being at large? Something seriously fishy is going on here. And it stinks that MCSO dug in their heels and refused to do anything for two months until media attention finally forced them to. 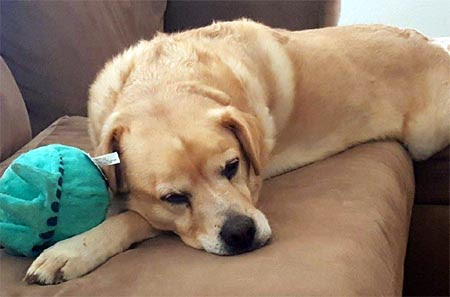 Somewhat of a timeline that I can figure out:

Wednesday, Feb 15 - the dogs were dropped off by their owners. They were due to stay just 5 days with the owners picking them back up on Monday, Feb 20.

Thursday, Feb 16 - the dogs escaped. The owners of the facility choose NOT to contact the owners.

Friday, Feb 17 - the dogs are still running loose. The owners of the facility continue to choose NOT to contact the owners.

Friday, Feb 17 - Zero, the German Shepherd is hit and killed by a car. An animal rescue group gets their Labrador, Keizer, which was running loose with Zero.

Friday, Feb 17 - Joe Arismendez contacts MCSO to report that he was bitten by Keizer, the Lab. This is impossible because the dogs had already been missing for more than 24 hours.

Saturday, Feb 18 - Ten minutes later, someone from the rescue calls the owner: "What they suspected at the time was Zero was hit by a car, and [she] asked me to describe the collar because she had the collar from County, and his body was already gone because it had been over 24 hours"

Wednesday, Feb 22 - After calling for THREE STRAIGHT DAYS AND LEAVING MESSAGES, MCSO finally speaks with the alleged victim who tells MCSO that "they contacted the owner and owner came and picked up the dog".

The owners have been trying since Feb 18 to get the police to do an investigation. Instead, they've been blown off, being told it's a "civil matter", which means they don't want to be bothered with it. Sheriff Joe would NEVER have tolerated this behavior - DERELICTION OF DUTY MCSO! 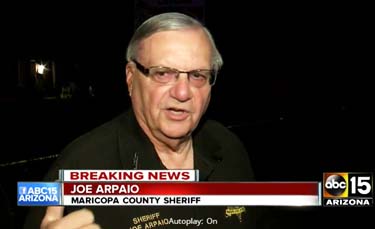 Whatever other issues people had to complain about Sheriff Joe, no one doubted that he loved animals and wouldn't tolerate people hurting them.

“I’m going to keep enforcing these animal cruelty laws as long as I’m the sheriff,” Arpaio said. “Everybody needs to know that if you’re going to abuse animals in Maricopa County, you’re going to get busted.”