The charges followed the investigation and subsequent seizure of three dogs from a Scott Avenue residence on Jan. 23. 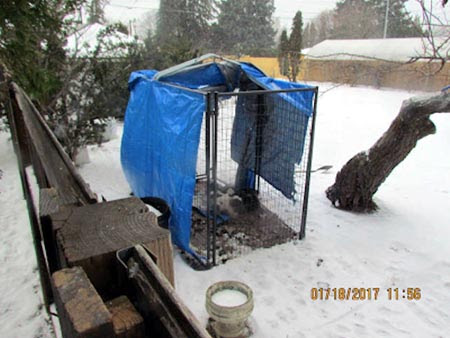 Neighbours noticed the dogs had been suffering neglect, left for hours at a time outside in cold weather.

Animal protection officer Kathy Woodward called it a case of “clear neglect,” noting two of the dogs had ear infections and all had mites on their pads from living in their own urine, feces and mud.

Mbamy, born in 1963, made a first court appearance on March 22. Her next court date is scheduled for April 26.

A Penticton woman accused of leaving her dogs to suffer outside in the winter, underfed, wet and freezing cold, has been charged with three counts of animal cruelty.

Charges were laid against Joelle Mbamy, 53, for causing unnecessary pain and suffering to an animal, failing to provide necessaries for your animal and causing an animal to continue to be in distress.

The multi-month SPCA investigation culminated in the seizure of the three dogs that neighbours said were often left in a tiny cage and could be heard whining in discomfort throughout the night, even in sub-zero temperatures.

“The owners were never home, they almost never let the dogs out,” said neighbour Laurie Price in January.

“They were so skinny you could see their ribs. They would fill up a bucket with food and just throw it in the cage in the morning, on the ground with the feces. Then they wouldn’t feed them again until the next day.”

One of the dogs was so emaciated it scored a “one” on the canine body conditioning scale of one to nine, denoting severe malnutrition. Five is the ideal number. It was rushed to veterinary care.

The two other dogs are considered a two on the scale or very thin.

All of the dogs had serious ear infections and grade-three dental issues, as well as yeast infections in their paws from walking on feces. 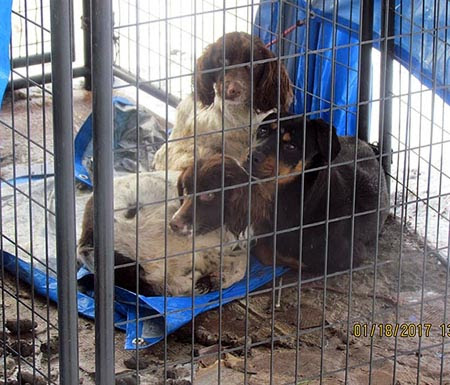 WEEKS OF COMPLAINTS UNTIL SOMETHING FINALLY DONE


Lauri Price is breathing a sigh of relief today after three neglected dogs were seized from a neighbour's property in Penticton yesterday.

A B.C. SPCA animal protection officer, the RCMP and a vet seized two springer spaniels and a rottweiller-cross from the home on Scott Avenue yesterday morning, Jan. 23.

She first noticed the animals several months ago, but says she has been frustrated in her efforts to get the authorities to investigate.

“I wish I’d gone to the media sooner, because that’s what really got this ball rolling,” she says. “It was heartbreaking to watch. Seeing them rescued was an emotional moment for me."

Cruelty Investigation Officer Kathy Woodward confirmed at that time that the dogs were removed from the home with a warrant and that she would be recommending charges against the owner.

Mbamy had her first day in court on March 22 and is expected back before the court on April 26, 2017 to consult legal counsel.

Dennis Walker June 11, 2014 · Edited ·
Sunrise Pharmacy has been advertising with socountry.ca inet radio since the day we signed on. So proud of you guys! We're taking about you.

Owner and pharmacist Joelle Mbamy and her daughter Donna Mbamy-Conci, 14, with the 2014 Pfizer Bowl of Hygeia award she received Tuesday. The recognition was for her outstanding record of community service through which she has helped hundreds of people outside of the realm of her daily work. ( western pic ) 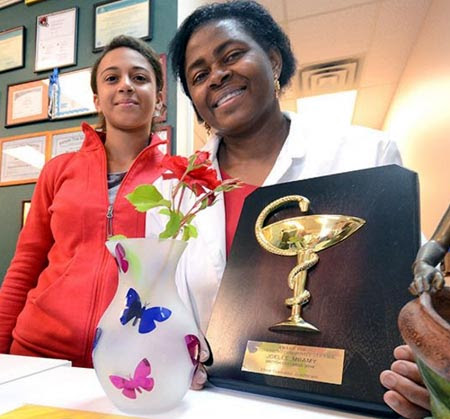 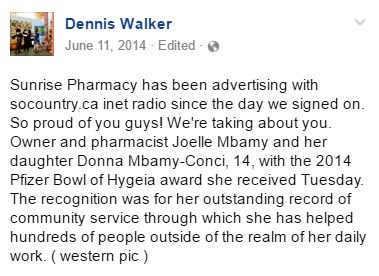 Sometime last week a story was told to me about the theft of three 7 to 8 week old Springer Spaniel puppies from a yard in Penticton, you may know the people who this happened to, Joelle Mbamy and her daughter Donna, Joelle runs the Sunrise Pharmacy in downtown Penticton.

Over the years Joelle has tirelessly served this community in many different ways and helped many individuals very selflessly and works long hours at her business and many endeavors throughout our community.

This has been very devastating to her and her daughter and I hope with YOUR help we can possibly find information related to this crime of opportunity.

If you have any information or have heard anything regarding Springer Spaniel puppies in or around Penticton or maybe anywhere for that matter, please contact Joelle directly from the numbers in the attached image or simply call the Penticton RCMP or Crimestoppers with details about this case so they know what you're talking about.

I'm sure there aren't too many Springer Spaniel puppies of that age and size that just happened to be acquired around the same time these went missing. 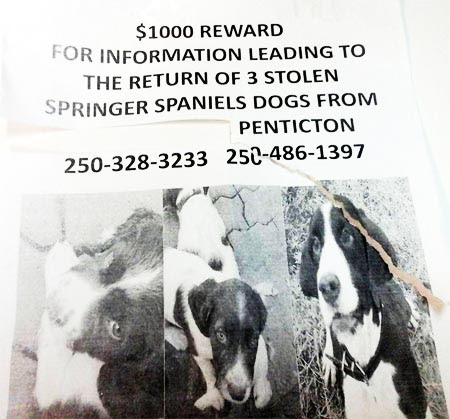 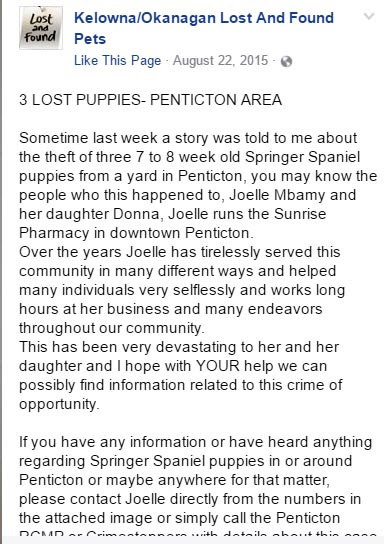