Florida: Loose pit bull mix running loose jumped up and attacked 7-year-old girl causing "deep lacerations on her arm and in her armpit"

FLORIDA -- A 7-year-old girl was taken to Fort Walton Beach Medical Center on Wednesday evening after she was bitten by a pit bull mix that was running loose in her neighborhood.

The girl had deep lacerations on her arm and in her armpit, according to Dee Thompson, director of the Panhandle Animal Welfare Society, which handles animal control.

The dog escaped from a home on Gibson Road in the Wright area. The animal control officer who responded used her van to corral the dog, which ran back inside its home. 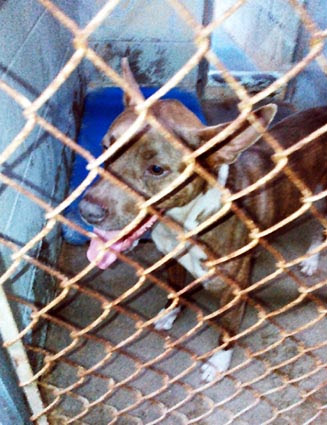 After the officer asked the dog’s owner to bring it back outside, the woman did so, but used a leash and collar that was insufficient to hold the animal.

The dog got away again but the officer was able to capture it.

The dog, a 2-year-old male named Coffee, is current on his rabies shots, but the law requires dogs to be confiscated for quarantine/observation if they bite a child above the waist.

Thompson said her animal control officer told her the dog was "as wired as someone who drank too much coffee". She also said the owner wants the dog back.