United Kingdom: After Luke Fenny let his Pit Bull Boxer mix attack and maul a Cockapoo named Bonnie, he blamed her owner and then fled with his dog. The courts have just ruled that he gets to keep his vicious dog. Let's take bets on how long before this dog attacks again.

UNITED KINGDOM -- A dog owner has been fined after his dog attacked a six-month-old cockapoo and left it for dead.

The victim was walking in Hartlepool’s Jesmond Gardens with her cockapoo, Bonnie, when it was attacked by a dog belonging to 22-year-old Luke Fenny.

Teesside Magistrates’ Court heard that, on December 5 at around 10am, the victim had Bonnie on a lead when another dog, a boxer-Staffordshire bull terrier cross called Bronson, “came from nowhere”.

Lynne Dalton, prosecuting, said: “She said she saw a male and he shouted to get hold of it.

“At this point the large dog grabbed hold of Bonnie by the throat and started flinging her around. She was completely at the mercy of the big dog.

“The male tried to drag his dog off but it would not let go of Bonnie.


“For some reason the male then stopped pulling at the dog and said ‘I told you to pick your dog up’ and then walked away.

“The large dog dropped Bonnie on to the ground. She was completely lifeless.

“The victim describes herself as ‘horrified’ by the actions of the other dog and how irresponsible the owner has been.” 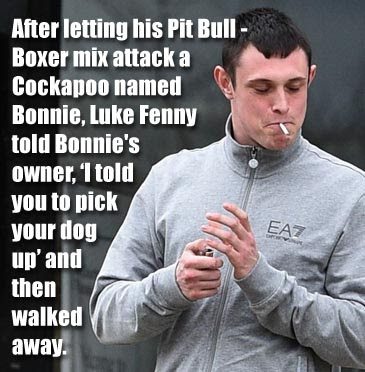 Bonnie was taken to the vets where she was treated for lacerations and given antibiotics.

“Nobody else was attacked; this was very much a one-off offence,” he said.

Fenny, of Beath Grove, Hartlepool, pleaded guilty to owning a dog that was dangerously out of control. He was fined £80 and ordered to pay £200 compensation.

He was ordered to keep Bronson on a lead and in a muzzle at all times in a public place for the rest of the dog’s life.

Presiding magistrate Jacinta Skip said: “If you do not comply with this the dog will be destroyed. This is a very serious matter. You have to take responsibility as a dog owner.”