NEVADA -- A sheriff's deputy has been released from a hospital following a pit bull attack in Pahrump.

From the Nye County Sheriff's Office:

On Tuesday, June 20, 2017, at approximately 7 p.m. a Nye County Sheriff’s Office Deputy was dispatched to the 5000 block of Pahrump Valley Boulevard in regards to a domestic violence call.

The 5000 block of Pahrump Valley Boulevard

Reporting parties in the area stated that the male involved in the domestic violence call was seen arguing with his girlfriend in the roadway and causing a disturbance. It was also reported to dispatch that the male was seen damaging a neighbor's mailbox during the argument.

The male was able to make it into his residence just before the deputy arrived to investigate. Upon arriving at the suspect's residence, the deputy shook the gate surrounding the property, attempting to draw out any dogs or other animals on the property.

Having lawful authority, the deputy entered the property to conduct a criminal investigation regarding the call for service that was received.

As the deputy approached the front porch of the suspect's residence, a large pit bull mix dog charged the deputy from the porch. The deputy slowly walked back towards the gate attempting to deploy his pepper spray but lost his footing while trying to escape the approaching pit bull mix. The deputy was attacked and subsequently bitten by the pit bull mix while he was on the ground.

The deputy managed to stand and use pepper spray on the dog as it was charging again. Deploying the pepper spray allowed the deputy to exit the property although it had very limited effect on the dog.

I'm guessing he didn't shoot the Pit Bull because the Nye County Sheriff's Office has been criticized recently for a different officer shooting a Pit Bull coming towards him, that may or may not have been acting aggressively. Now other Nye County deputies appear to be scared to protect themselves.

If any dog deserved to be shot, it's this one. A lot of dogs will bark, growl, menace and even bluff charge to scare people, but very few cross that line that involves actually biting onto a human being. This is a problem; once a dog crosses that line you can't go back. It will always be a biter because it has no fear of attacking humans. 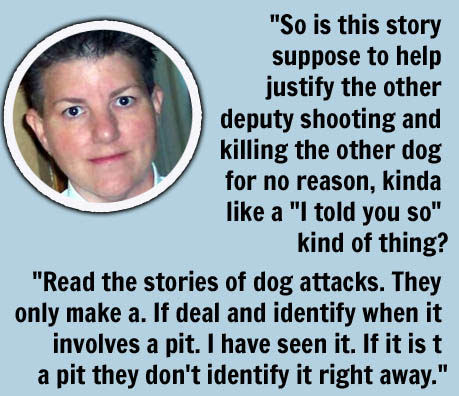 He was treated at a hospital for the dog bite, and has since been released, the agency said. The dog was quarantined by Nye County Animal Control for a 10-day period because its owner could not provide current rabies vaccination records.

The Sheriff’s Office said the initial domestic violence call was investigated and determined to be a non-violent verbal argument.

The dog was taken to Nye County Animal Control for a 10-day quarantine period after the dog owner could not provide current rabies vaccinations records.

Amy Persun Connors - So is this story suppose to help justify the other deputy shooting and killing the other dog for no reason, kinda like a "I told you so" kind of thing?

Michael Page - Yeah, why identify the dog as a pitbull mix?

Dawn Nickelson Winkle - They have always identified the type of dog that is involved with an attack.

Julie Carlo - Dawn Nickelson Winkle no they don't. They only identify it if it has pit in it.

Martin Romans - They report all the stories . This is just another story . It does not justify any past stories or future . Have you done this Job ? Do you know what it is like to be charged buy a pit or a pit/mix “Some” of the dogs are very dangerous . I have a shirt with a torn sleeve to prove it . I also got charged by a heard of Chihuahuas but that is a funny story :)

Brian Clardy - This Deputy reacted like a true proffessional. He was in great physical danger and under tremendous stress. His choice to use a less than lethal alternative speaks volumns of his courage and coolheadedness. Thank you Sir for your service. Hope you recover quickly.

Mike Gevas - It is too bad that this deputy, because of another recent incident, was afraid to deploy lethal force against this dog. It is by sheer luck that this deputy was not hurt worse or killed. This is definately NOT the proper way to respond to a dog attack. Once this deputy was down, he totally subject to severe injuries. Pepper spray is not a guaranteed deterrent to an attacking vicious dog.

Bev Seymour - Come on people. The officer was walking backwards to the gate. The dog came off the porch. The officer could not draw his weapon and shoot because if he missed, it would be a bullet going into the house. Not a clean shot!

Pepper spray does not work. It's not going to stop a dog in full drive mode. It may delay a mauling if one is not quick on their feet, but it's not going to cause a dog in attack mode to tuck tail and run.

Robin Lane - I love pitbulls...but the fact is...they carry an aggressive gene. You never know when it is going to show up no matter how lovingly you train it. And...I was bit twice with the dogs tail wagging.

Christopher Donley - This deputy had every right to use lethal force on this dog but yet he was hesitant because of the last incident. Deputy should have shot it the second it latched on to him. 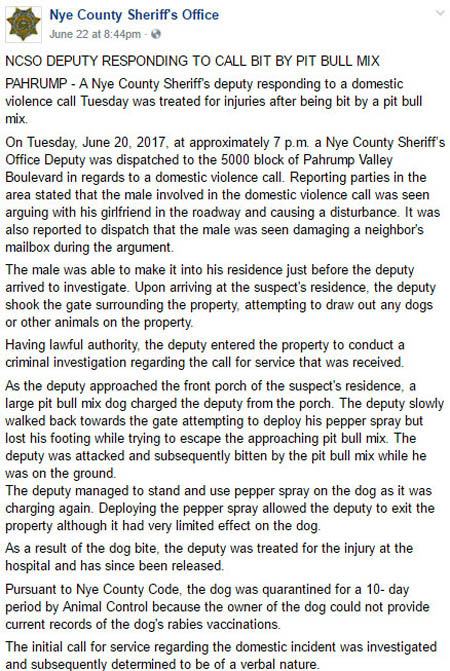 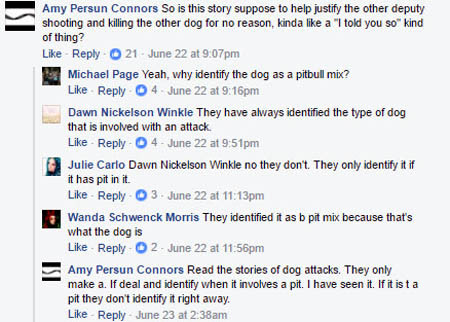