RHODE ISLAND -- A man was injured when he was attacked by two dogs in Warwick Tuesday night, according to police.

Witnesses told NBC 10 News that two pit bulls jumped the fence and attacked the man, identified as 57-year-old Robert Joyal, who was walking his dogs on Titus Lane at about 6 p.m. 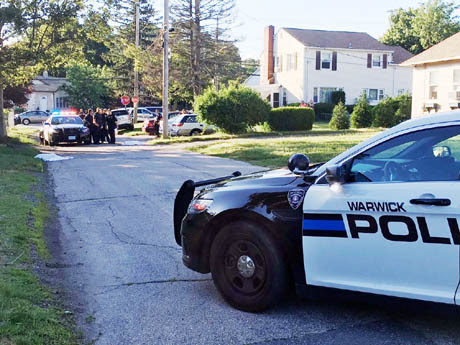 “Oh, he was right on top of him, shaking him like a rag dog,” Paul Taylor, who said he saw the attack, told NBC 10.

Taylor said he dropped his gardening tools and started running down the street to help. 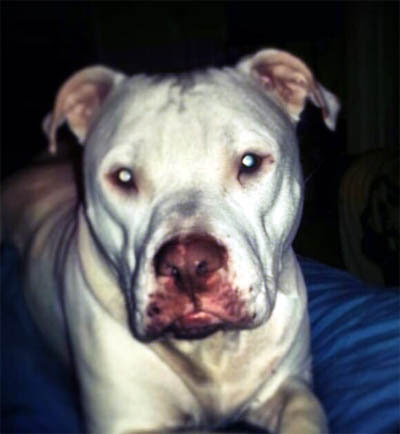 “I noticed a dog on top of another dog, giving it a good beating,” he said.

“I ran down there and I was going to help anyway I could,” Taylor said. “Thank god the police officer was there and took care of it very quick.” 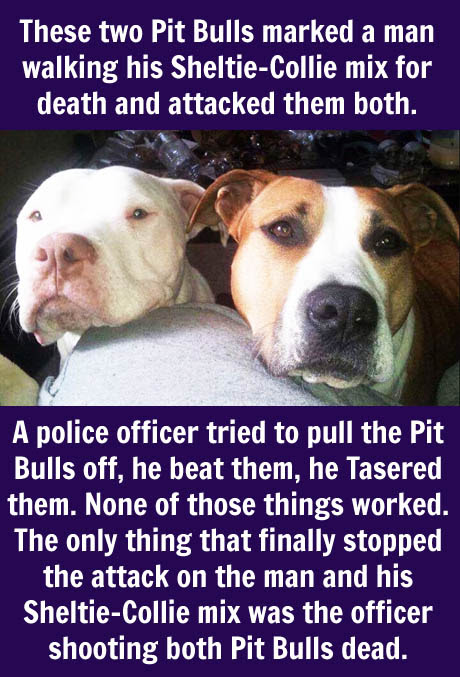 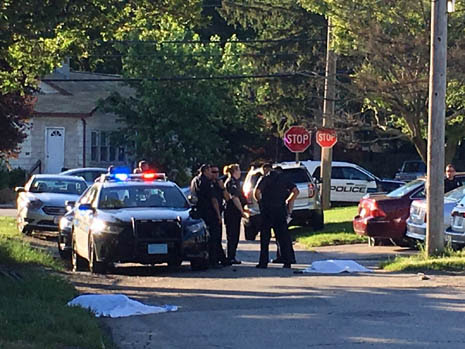 Warwick Officer John Zaborski happened to be nearby, according to Taylor.

When Zaborski approached, police said both dogs went after him. Zaborski stunned one of the attacking canines with his Taser, but he had no time to subdue the other aggressive dog using non-lethal means. Fearing himself or bystanders could get hurt, police said the Zaborski killed the second dog with two shots from his service weapon.

Police said Officer Zaborski went to tend to Joyal and the smaller dog, but the dog he had Tased revived and resumed its attack. The officer tried to fight off the dog, which police said kept lunging and biting at him.

Meanwhile, the man is screaming, his little Sheltie mix is screaming and they're both being viciously mauled by the two attacking Pit Bulls.

He had to do SOMETHING to stop them.

“When he wouldn't get off, the cop shot that dog and stopped it,” Taylor said.

When the second Pit Bull didn't run away and instead came after him, the officer shot and killed it too. 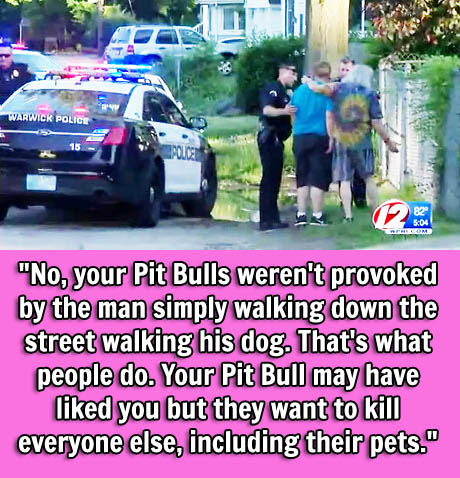 Even underneath the fear and the adrenaline, Taylor remembers hearing at least three shots fired before both pit bulls were killed.

NBC 10 arrived around 6:45 p.m. as officers were processing the scene. Two dead dogs, which were laying in the street, were covered in white sheets.

Police later told NBC 10 that they had to use force, which resulted in them shooting both pit bulls.

Authorities said the man was rushed to a hospital and that his dog was taken to a veterinarian. Their conditions were not immediately available.

It was also unknown if any charges would be filed. 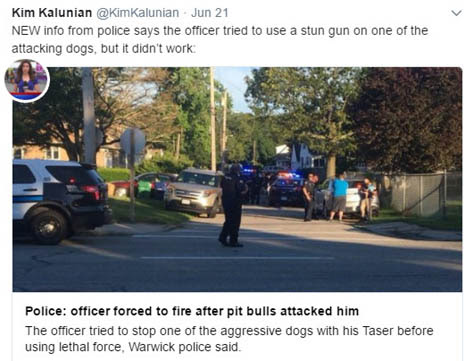 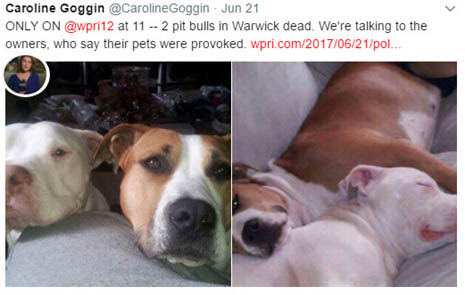 Earlier in the evening, police had blocked off the end of Titus Lane where the street meets Post Road.

A group of people stood outside 658 Post Road near a fence along Titus Lane.

After police left, they swore at a Providence Journal reporter who approached on the street to take a photo of the property.

Police said in a news release Wednesday that their initial investigation determined Officer John Zaborski’s actions “were lawful and necessary to protect the lives of citizens and him[self] from serious bodily injury.” 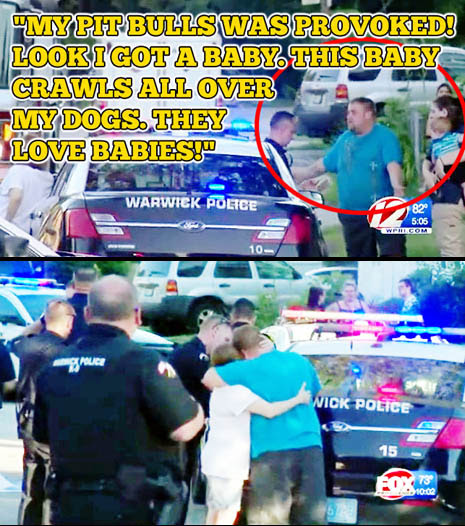 The owner of both dogs told Eyewitness News their names were Buddy and Bella. Buddy was a six-year-old Full-Blooded Texas Red Nose Pit Bull. Bella was a seven-year-old half Pit Bull, half Terrier.

What in the hell is a Texas Red Nose Pit Bull? And a "half Pit Bull, half Terrier"? Give me a break. They both look like Pit Bulls to me.

“Everyone loved them and they loved everyone. They weren’t mean dogs,” Amanda Hallock, the sister of the owner, said.

The dog’s owner said Bella got out on Tuesday night, and when a neighbor went to put her back in their yard, the gate didn’t close. Still, Hallock said the smaller dog provoked the pit bulls on Tuesday night. “That dog was antagonizing them and it was just an accident.” 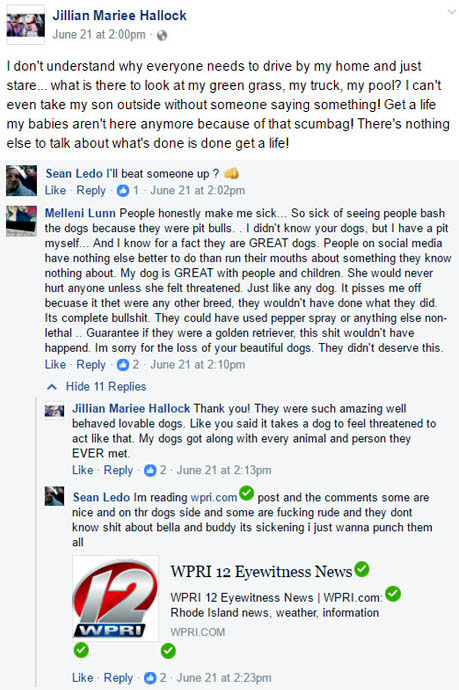 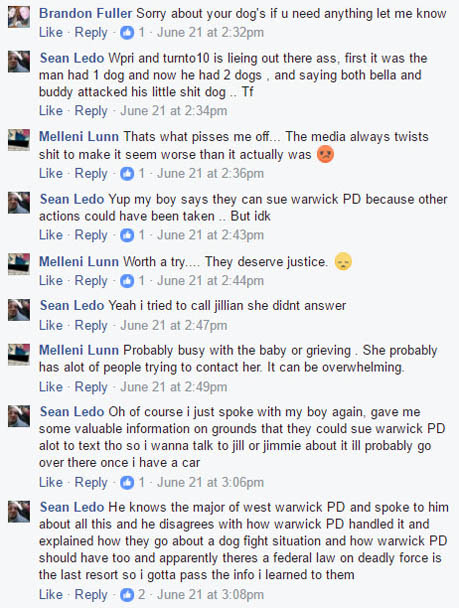 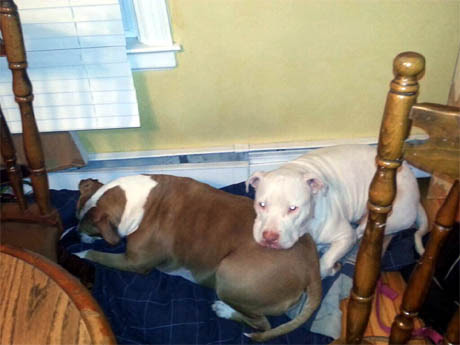 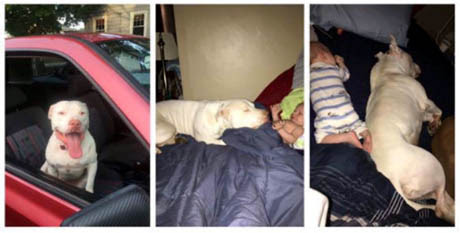 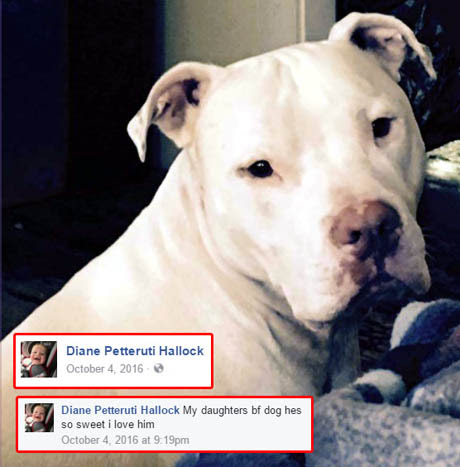