Michigan: Man throws his Shar Pei into woman's yard and tries to get it to attack her Doberman-Shepherd mix

MICHIGAN -- Police issued a ticket to a 24-year-old Westland man Friday
afternoon for cruelty to animals after he deliberately placed his shar pei dog into a neighbor's backyard on Grandview and ordered it to fight with the neighbor's dog.

The neighbor, a 30-year-old woman, told police the man had repeatedly taunted her and threatened to send his dog after her dog, a doberman shepherd mixed breed.

The woman told police the man appeared intoxicated when he lifted his dog over her fence and into her yard. 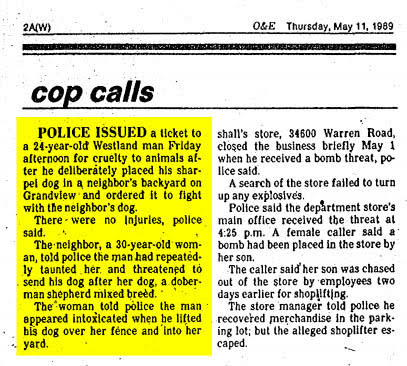