Florida: Pit Bull, that attacked and mauled 63-year-old Mary Bernal to death, has been euthanized

FLORIDA --  A pit bull that attacked and killed a woman in Florida has been put down.

The dog mauled 63-year-old Mary Bernal Friday in the back yard of her sister's home in Deltona.

WKMG-TV in Orlando said the victim's sister also was injured in the attack.

The dog reportedly had never shown any aggressive behavior in the past.

Norman Fortier Jr. pleaded guilty to a single count of cruelty to animals, and was ordered to pay a $500 fine and give 100 hours of community service.

Judge Joseph Doherty called Fortier's actions ``a very upsetting scenario'' and gave him a six-month prison sentence, which was suspended. Doherty also sentenced Fortier to 18 months of probation, and ordered him not to take any job involving animal care during that time.

Fortier, 54, declined to speak when Doherty offered him the chance to address the court.

After the hearing, Fortier's attorney said the incident stemmed from poor judgment, not bad intentions.

``This wasn't malicious behavior, this was stupid behavior, and he recognizes that,'' attorney Kosta Diamantis said. ``There was no malice.''

Doherty, Diamantis and Senior Supervisory State's Attorney Steven Preleski all noted that Fortier had lost his job as a result of the drowning. He had been Bristol's assistant animal control officer since 2000, and was making about $38,000 a year when he resigned shortly before a police disciplinary hearing in April.

Police had initially charged Fortier with two counts of animal cruelty, but one was dropped as part of his plea bargain. Doherty indicated he was accepting the plea agreement partly because Fortier had voluntarily forfeited his option of seeking accelerated rehabilitation, which ultimately might have left his criminal record clean.

``To your credit, you didn't choose that route'' Doherty told Fortier in court.

Fortier could have been sentenced to as much as a year in prison on the animal cruelty charge, which is a Class A misdemeanor, Doherty said.

Court records show Fortier was dispatched to West Street late in the morning of March 31 after several people called 911 to report seeing a badly injured cat. Fortier found the animal, which apparently had been hit by a car, and took it to the city pound. He then left to answer other calls.

About an hour and a half later, a Plymouth animal control officer arrived to feed a dog at the pound, which Plymouth shares with Bristol. The Plymouth officer noticed the cat, bleeding from the head, was still breathing and notified city police, who ordered Fortier to return to the pound.

When Fortier arrived, he used a tool for snaring wild animals to grasp the cat and drown it in a bucket of water. He later told investigators that he was convinced the cat would not have survived a trip to a veterinarian for euthanasia.

Preleski said Fortier might have been making ``a very misguided attempt'' at ending the cat's suffering, and Doherty said Fortier may have been trying to act in the animal's best interest.

``But the protocol requires that a veterinarian make the ultimate decision on whether the cat lives or dies,'' Doherty said. ``The question of whether an animal lives or dies carries a heavy responsibility. You made a judgment that should have been made by someone else.''

Fortier has not publicly spoken about why he left a wounded animal alone at the pound for 1 1/2 hours, but Diamantis said after the hearing that it wasn't intentional.

``The cat wasn't moving. It was limp when he found it, and he thought it was [already] dead,'' Diamantis said.

FLORIDA -- This South Florida community some 90 miles north of Miami is outraged after a suspected illegal alien allegedly raped a puppy.

The man, who initially told police his name was Junio Trenta but is believed to be Enrique Garcia, was taken into custody after Martin County Sheriff's deputies were dispatched to a possible animal in distress. 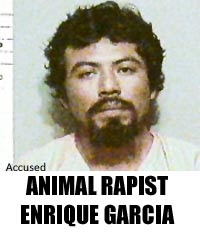 When they arrived, officers "saw Garcia sexually assaulting a 28-pound, 14- to 16-week-old dog of mixed breed," according to the sheriffs office.

The arrest affidavit indicates the male dog ran and hid behind the deputies.
Garcia then talked with detectives and admitted only to having the dog in his lap.

The dog, a 4-month-old Argentine Dogo, is reportedly being cared for by the Humane Society of the Treasure Coast. 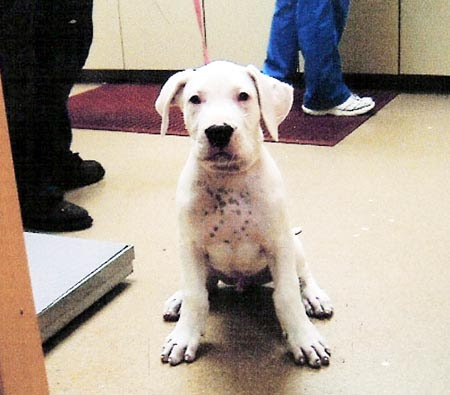 "He's already been evaluated by the vet, and the vet says he's OK and will recover from whatever happened," Humane Society spokeswoman Roberta Synal told the Stuart News. "If he's put in a good foster home, he's going to get lots of love and training."

Garcia's criminal record, other than being a criminal alien in the United States, includes a larceny charge which netted him just 28 days in the Orange County jail

A good question is to ask where did he get this dog? They are not a common dog that you see everywhere and cost a lot of money. Did drug money buy it or was it stolen from its true owner before being raped by Garcia? 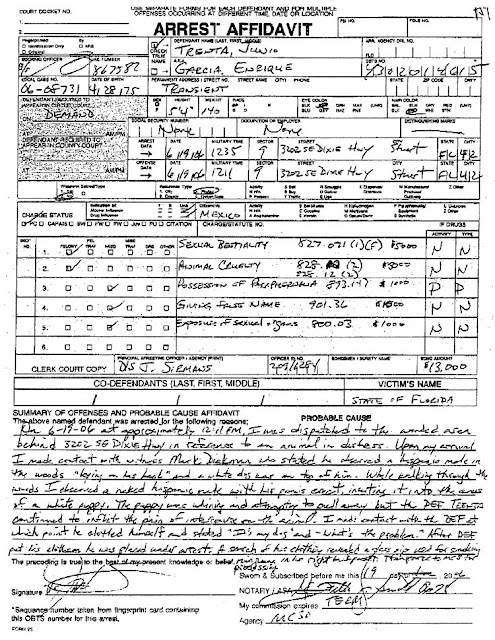