Cash Carson and a friend were walking on a neighbor's dirt road Saturday afternoon to play at their fort when they saw the two dogs at an open gate.

"The two turned away, but the victim was quickly attacked from the back. . . . The playmate ran home," Sheriff Gary Penrod said.

Joe Blankenheim told KABC-TV Channel 7 that he kicked the dog on top of Carson and was almost attacked himself.

Blankenheim choked back tears as he described the boy's last question. "Cash said, 'Am I going to die?' " Blankenheim said.

The boy's family drove him to Barstow Community Hospital, where he was pronounced dead.

The victim's mother, Becky Carson, said she was never warned about how dangerous the dogs were.

The dogs were taken to a county shelter in Devore. The dogs' owner was not immediately arrested. 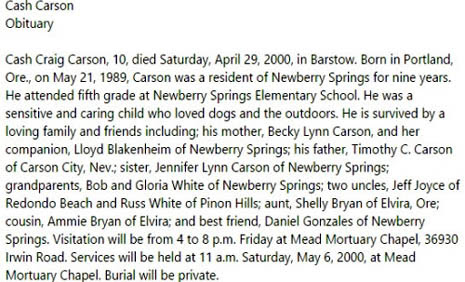