KANSAS --Three crazed Rottweilers fatally mauled an 11-year-old Kansas boy yesterday as he tried to board a school bus while his classmates watched in horror.

The large dogs set upon Christopher Wilson and his 8-year-old brother, Terrell, as they were about to get on the bus in rural Milford, police said. The terrified boys climbed a nearby tree as bus driver Kathy Roberg honked her horn in a frantic bid to scare off the frenzied dogs, witnesses said.

Christopher tried to make a run for the bus, but the dogs pulled him down as Terrell screamed hysterically in the tree, police said. Sixteen pupils from Milford Elementary School watched from the bus. It was quick and brutal. 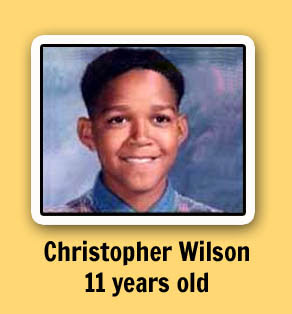 "They killed him, and then they just sat there over their prey," Jeannette Day, a neighbor who ran outside and saw the end of the attack, told the Daily News. "It was like they were gloating. "The lady in the school bus was just sitting there, laying on the horn. There was nothing else she could do."

A police car arrived, and the officers opened fire, killing two of the dogs, Day said. The third dog was on the lam last night, pursued by the Kansas Highway Patrol, local police, state animal control officers, military police from nearby Fort Riley even a military helicopter.

"I've never seen anything like this in all my law enforcement years," James Jensen of the Geary County Sheriff's Department said as he fought back tears.

"With Rottweilers, once they get the taste for blood, there's nothing you can do," said Tonya McCaully, a sheriff's spokeswoman.

The boys' father, Army Sgt. 1st Class Brian Wilson of Fort Riley, was flying home last night from Bosnia-Herzegovina, where he is part of the peacekeeping mission.

The dogs' owners, Jeffrey Davidson, 41, and his wife, Sabine Davidson, 26, were arrested and accused of involuntary manslaughter by Geary County prosecutors. Neighbors said the dogs, which were kept outside, were always barking and that some residents feared them.