ILLINOIS -- An Aurora couple are suing the city for $6 million in damages, claiming city representatives have harassed them for years.

Lynda and Larry Smith filed the suit June 16 in Kane County Circuit Court. The suit also asks a foreclosure case the city brought against them in September be dropped. The foreclosure case was based on liens imposed for housing code violations that are almost 10 years old.

Lynda Smith, 63, who suffers from Parkinson's disease and asthma, says in the lawsuit that she has begun taking 21 new medications since the foreclosure was filed. Those medications include antidepressants, pills for high blood pressure, and drugs to control her Parkinson's disease. She has gone to the emergency room at least five times since she found out about the foreclosure, the suit says.

Larry Smith, 66, from whom she has been separated for years, uses a wheelchair and is in a rehabilitation center.

Lynda Smith is known in Aurora for her affinity toward animals. In August and September 2003, Aurora Animal Control removed 26 cats and a dog from Smith's residence and her brother's residence about a block away, according to animal control manager Linda Nass.

Smith concedes that her house "sank into disrepair," according to the lawsuit, because of her and her husband's disabilities.

But her attorney, Judd Lofchie, said Lynda Smith was granted a "reasonable accommodation" for additional time to fix code violations because of her disabilities.

Lofchie said that with help from advocates Lynda Smith has made 40 of 46 repairs required by the city inspections department. The suit was filed after the city imposed a daily fine of $500 per remaining housing code violation.

Idaho: Despite her home being covered in feces, urine and reeking over overpowering ammonia levels, Gale McVay insists she was caring for her 123 cats properly

IDAHO -- A Boise, Idaho, woman accused of keeping more than 100 cats at her home in less then pristine conditions blasted the "heavy-handed" tactics of authorities.

Animal control officers raided McVay's house Wednesday, while she was in the hospital. Idaho Humane Society spokeswoman Dee Fugit said they found 123 cats, many gravely ill, in a home covered in feces and urine.

McVay disputed the Humane Society's characterization of her and her home and although she said she didn't know about a dead cat found under the sofa, she did admit that some of her rescued cats had a flea problem.

Experts say a common misconception about animal hoarders is that they are people who simply took on too much and fell behind, or got overwhelmed, by the care and feeding of the animals they rescued from certain death.

In reality, hoarders compulsively collect animals and/or allow them to reproduce even as conditions deteriorate. They lack awareness and sympathy for the creatures they inadvertently torture in the name of rescue, said the Boston vet, Dr. Gary Patronek.

"I think of these as little animal concentration camps. It's disturbing," said Dr. Jeff Rosenthal, executive director of the Idaho Humane Society. "The animals suffer horribly."

2010 Update:
Gale McVay died on Oct 27, 2009 at the age of 63. Her obituary says she fought a long battle with Alzeimer's disease and dementia. These two illnesses may explain why she was so irrational about the squalid conditions of her home and the sick and dying cats she insisted were "fine".

CALIFORNIA -- A 12-year-old boy left alone with his family's two pit bulls was mauled to death by the dogs Friday inside a Sunset District apartment in San Francisco, authorities said.

The boy, identified as Nicholas Scott Faibish, was attacked in a building across from Golden Gate Park by the 80-pound dogs, a male named Rex and a female named Ella.

"Get them out of here!" she screamed over and over, neighbor Donna Castelli said. Another neighbor heard the commotion, ran outside and saw the mother, covered in blood, through her apartment window.

A police officer shot and killed Ella when the dog prevented him from entering the apartment, a police spokesman said. The other dog was captured in the backyard and taken to the animal shelter.

Paramedics tried and failed to resuscitate the boy at the scene. Investigators would not say whether he was alive when his mother found him.

There was no immediate explanation for what triggered the dogs' attack.

"The dogs were sweethearts," said Art Austin, Castelli's husband. "I never thought they were vicious. They were really nice. I would pet them, and my wife would kiss them on the forehead."

But 13-year-old neighbor Aaron Vinnik said he saw the dogs regularly and they were not always well-behaved.

"The dogs barked at us, and one of them, the white-and-brown one, he came (at) us," Aaron said.

He said the dogs were "sometimes nice, sometimes mean."

Veterinarian Robert Arrick, who had treated the pit bulls at Park Animal Hospital, said he and his staff "never had a bad experience with them."

He said the boy's father, Steve Faibish, "walked (the dogs) up and down Ninth Avenue, in and out of stores -- there was never any problem.

"They were Steve's dogs, really," Arrick said. "I never saw the mother with the dogs. I don't think they were ever given obedience training per se.

"I have no idea what happened in that house -- it just boggles the mind. These seemed like the nicest dogs -- it's that old conundrum about pit bulls."

Maureen Faibish and other family members were interviewed by police Friday night and were not available for comment.

Dr. Carl Friedman, director of San Francisco Animal Care and Control, said at least one of the dogs had been in protective custody at the animal shelter about a year ago.

"I don't know exactly why," he said. "It didn't have anything to do with showing signs of aggression."
Friedman said Rex was in the shelter Friday night, isolated from other dogs.

"He did seem to have blood on him," Friedman said. "He didn't seem injured in any way. He's a pretty big guy. He (wasn't) very aggressive in the vehicle." 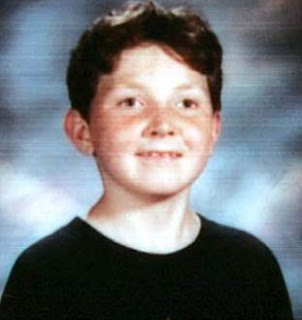 "You can ask 10 different people if they think pit bulls are inherently aggressive or not, and you will probably get 11 different answers," he said.

A teacher at Roosevelt Middle School, where Nicholas attended sixth grade, said the boy's family was planning to move to Oregon after the school year. The boy had not been to school on Friday, and a school attendance clerk who attempted to call the family home found the line had been disconnected.

Nick, as the teacher knew him, liked talking about his dogs, playing computer games and being with his friends, she said.

"He's so similar to all boys his age, very similar," said the teacher, who asked not to be identified. "I'm just devastated. This is just so unreal."

"I just remember freckles on him," she said. "I kind of remember him just being animated. I saw smiles on his face, that's what I remember. I remember a happy youngster. ... It's just so sad to hear the circumstances.

"We're having our eighth-grade dinner dance right now, and we haven't told any of the kids," Panagotacos said. "Monday, we will definitely need to deal with this -- grief counselors, whatever the kids and staff need." She put her hands over her face and began to cry.

Ony Ozonsi, an eighth-grader at Roosevelt, remembered Nicholas as a bubbly boy who stood out even to him, two grades ahead.

"He was a happy little kid," Ony said. "He liked to play with the other kids a lot and was always here after school."


Police Chief Heather Fong and Fire Chief Joanne Hayes-White were among the authorities at the scene of the attack.

"It's a very tragic situation," Hayes-White said. "The city family offers its deepest sympathy and condolences."

Nicholas lived in the apartment with his parents and a younger sister and brother.

A neighbor who lives in an adjacent building and asked not to be identified said she had called 911 after hearing Nicholas' mother screaming, "Help me! Help me!"

She ran out to a catwalk, looked through the Faibish family's window and saw that the mother's face and hands were covered with blood.

The neighbor said she had seen the dogs earlier Friday lounging in front of the two-story wood-shingled apartment building.


Castelli was among those who said the two dogs seemed tame. They would run around the backyard of the apartment building but were always on a leash when in public, she said.

"I'd kiss them on the forehead," Castelli said. "They were lovely dogs."

Michelle O'Leary, a neighbor on Lincoln Way, said the pit bulls were puppies, not fully mature.

A man identified by neighbors as Nicholas' grandfather spoke briefly outside his residence on Lawton Street, a few blocks from where the boy lived. "I can't talk right now, I'm in a state of shock," he said.

Dog maulings in the Bay Area
March 29, 2005: An 11-year-old Concord boy, JaQuan Rice Jr., was mauled by two pit bulls as he walked near his home. Neighbors rushed to his rescue, with one firing a handgun to scare the dogs away. The owner of pit bulls, Jeff Bray, 28, was charged with owning a mischievous loose animal that causes serious bodily injury to someone, which is a felony. Bray has pleaded not guilty.

June 29, 2004: An 88-year-old Concord woman was injured after a neighbor's pit bull pulled her from her walker and mauled her. The woman, Mabel Wong, suffered extensive injuries to her face, ears and arms in an attack that an animal control officer said she was lucky to survive. No charges were filed against the owner.

Nov. 23, 2003: A pit bull was shot, a police officer and a dog walker were rushed to the hospital, and a police horse was badly hurt after the off- leash dog attacked the horse in Golden Gate Park. The pit bull was later allowed to remain with its owner but must be leashed and muzzled in public and registered as a vicious and dangerous dog.

June 18, 2001: Three pit bulls mauled a 10-year-old Richmond boy, Shawn Jones, as he rode his bicycle in his neighborhood, severely injuring his face and tearing off both his ears. The boy has undergone numerous surgeries since the attack.

The dogs were killed by lethal injection two years later. Dog owner Benjamin Moore was charged with two misdemeanor counts of concealing the dogs afterward, but prosecutors shelved the charges after Moore was sentenced on drug charges.

March 17, 2001: Two San Francisco police officers fired about 30 shots to kill a pit bull in the Ocean View district after a woman was bitten trying to separate him from her akita.

Jan. 26, 2001: Diane Whipple, a 33-year-old lacrosse coach at St. Mary's College, was killed in a Presa Canario attack in the hallway of her Pacific Heights apartment building in San Francisco. The two dogs were owned by attorneys Marjorie Knoller and Robert Noel, who kept them in their apartment on the same floor: Bane, weighing more than 120 pounds, inflicted the fatal wounds. His mate, Hera, may have also taken part in the attack.

The dogs were owned by Paul "Cornfed" Schneider, a high-ranking member of the Aryan Brotherhood prison gang who was serving a life sentence. Bane was destroyed shortly after the attack. Hera was later given a lethal injection.

Noel and Knoller were each sentenced to four years in prison for manslaughter in 2002 and have been freed on parole, though an appeals court has ordered a lower court judge to reconsider his ruling overturning Knoller's murder conviction. If that conviction is reinstated, she could return to prison.

June 19, 1996: An 8-year-old boy, John Young, was mauled to death by two rottweilers on an East Oakland street. Oakland police shot and killed the dogs. The Alameda County district attorney decided not to file charges against the owner of the dogs.