NEW JERSEY -- After almost four years of legal wrangling, a New Jersey judge has ruled that the state Department of Environmental Protection could begin moving 24 tigers to a sanctuary in Texas from the private preserve run by the woman widely known as the Tiger Lady.

The judge said the woman, Joan Byron-Marasek, had had "by any definition, a reasonable time" to argue her case against moving them. But Byron-Marasek can still appeal the ruling. 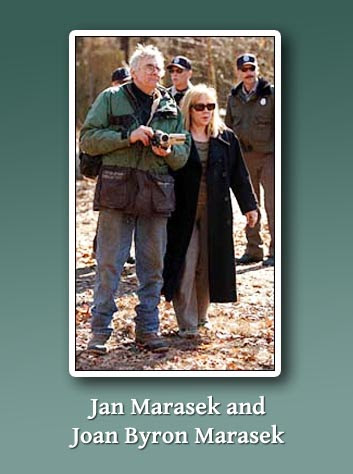 The order by Judge Eugene D. Serpentelli, of Superior Court in Toms River, could end one long chapter of the state's fight to close the Tigers Only Preservation Society in Jackson Township, which began after a Bengal tiger was found roaming the nearby woods in January 1999. The 430-pound cat was shot and killed by the authorities.

Although it was never proven that the animal belonged to Byron-Marasek, who owns and operates the preserve, the state revoked her permit to keep the tigers, saying conditions there were inadequate.

Byron-Marasek said she was unhappy with the decision to move the tigers to the Wild Animal Orphanage near San Antonio. As she has for months, she continued to criticize the sanctuary, which the state chose.

"It is tantamount to taking children who are happy and healthy and loved and putting them in the home of a known child abuser and rapist," she was quoted as saying.

Carol Asvestas, the director of the San Antonio preserve, said that because of Byron-Marasek's complaints, many agencies had inspected the sanctuary in recent months, and all had given it their approval.

State officials said it was too early to discuss the details of the move, or even when it would begin.

"Our foremost concern is for the public safety," said Amy Cradic, a spokeswoman for the state Department of Environmental Protection. "We also are concerned about the humane treatment of the animals, and we want to ensure that they are transported safely."

Asvestas said she was relieved at Serpentelli's decision, but expected Byron-Marasek to appeal. "Hopefully," she said, "we'll get the animals by midyear next year, maybe a little bit sooner. We could do it in four to six weeks. It's the legal issues that could take longer.

"But we're ready," she said. "I think it's time. These animals need to be situated in a better place, and they need to stay together." 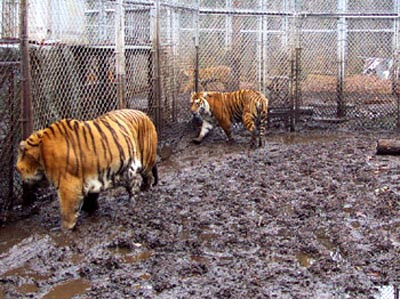 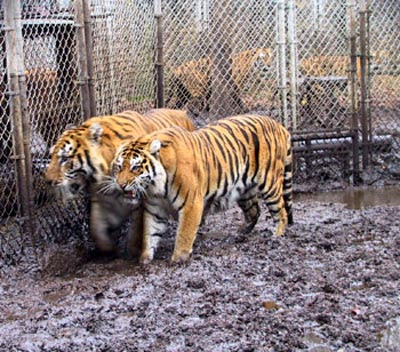 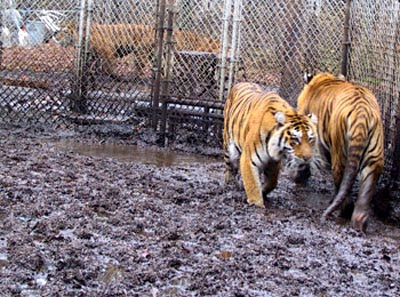 She said the Tigers Only Preservation Society was never an adequate place for wild animals, especially because Byron-Marasek tended to treat them as pets. Byron-Marasek's husband, Jan Marasek, 70, was attacked by one of the tigers on Oct. 11 and was hospitalized for a week with injuries to his head, face and upper left arm.

"I believe Joan and her husband had a very false sense of security around those animals," she said.

"They want to treat them like little kitty cats. They're not. They're dangerous and wild, and you have to be able to control them. He's lucky to be alive."

In a 40-page ruling, the judge detailed the long legal dispute that pitted the state against Byron-Marasek, who has housed the tigers on her property for almost a quarter of a century, since long before housing developments and shopping centers hemmed in the preserve. After the state environmental commissioner determined almost two years ago that it should be closed, Serpentelli said his only tasks were to determine who would move the tigers, and where.

CALIFORNIA -- A judge sentenced one of the owners of the dogs that mauled a Newberry Springs boy to death in 2000 to five years probation in accordance with a plea bargain Friday.

Cash died on April 29, 2000, after caretaker James Chiavetta unchained one of the dogs he was paid to care for and let it run loose on in the yard at the 36600 block of Newberry Road — property owned by Caldwell and Garcia .

Chiavetta, 54, was implicated in the death because Garcia and Caldwell hired him to live on the property and care for the dogs. A jury convicted him of involuntary manslaughter. He was sentenced to a four-year prison term in May 2001.

Caldwell pleaded no contest to the charge as part of a plea agreement with the district attorney’s office.

“The death of Mr. Chiavetta eliminated a essential part of our case,” Roth said. “That is why we had to resolve the case short of trial.”

“This burden will be on me the rest of my life,” he told Probation Officer Pete Bockman, according to Bockman’s report. Bockman wrote, “He feels like this incident in question was a tragic accident that has ‘ruined (their) lives.’”

Caldwell told probation officials that he instructed Chiavetta to keep the dogs chained and behind the fence because the animals were not neutered.

Bockman’s report contends Caldwell had some idea that these dogs could harm others.

“It is felt, based on all the information available, Mr. Caldwell knew the dogs were potentially dangerous and that is the reason he had instructed Mr. Chiavetta to see the dog (Bear) was chained and that he supervised the dog whenever the dog was allowed off the chain,” according to Bockman’s report.

The probation officer noted that Caldwell has no prior criminal record and did not intend for the dogs to hurt anyone.

“Despite the tragic nature of this case, and the above information regarding the defendant, it is felt the plea bargain agreement is appropriate,” according to Bockman’s report.

During his interview with probation officials, Caldwell admitted to occasionally using marijuana.

His lawyer, Ronald Lewis requested his client not be forced to submit to drug testing as a term of probation.

“There was no use of drugs involved in this matter,” Lewis told the court.

“It is appropriate to control drug usage even if it is seldom,” Dorr said.

Probation terms include paying $6,515 plus 10 percent for victim restitution, serving 60 hours of community service, refraining from owning dogs and meeting with a probation officer every two weeks, according to Bockman’s report.

The dogs, named Bear and Louise, have since been destroyed, according to probation officials.

Co-defendant Gilbert Garcia is slated to appear in court next month.

Garcia was recently injured in a motorcycle accident and unable to come to court.

Note: In December 2002, it appears that Michael Carson, Cash's dad, was awarded a judgment of $750,000 against the Pit Bull's owners Michael Caldwell and Gilbert Garcia.