GEORIGA -- A Buford woman was released on a $5,600 bond from the Gwinnett County Detention Center Thursday after being arrested on charges of animal cruelty Wednesday morning.
Dora L. Russel, 43, had been charged with one misdemeanor count of cruelty to animals, but could face more citations.  According to Cpl. Darren Moloney, spokesman for the Gwinnett County Police Department, investigators with Gwinnett police, Animal Control and the state Health Department executed a search warrant and seized about 100 animals from her residence.  "Animal control received a complaint of possible animal cruelty at [Russel's] residence," Moloney said. "General Crimes used the assistance of the state Health Department because of the deplorable living conditions of the house."  Moloney said the smell was so bad that the odor could be detected from the street, and a breathing apparatus was needed for inside the house.  The investigators seized approximately 17 dogs, three cats and 21 birds, Moloney said. Additionally there were individual aquariums inside the house that contained 50 field mice.  "Animal control is in the process of documenting each animal case so that they can administer the proper number of citations," Moloney said.  Russel was arrested for the same offense in 2002, according to Moloney. In that offense there were 200 animals removed from the same house.  "Gwinnett County Animal Control issued her 93 citations on that past offense," Moloney said.

ILLINOIS -- Authorities have impounded a pit bull owned by a Wheeling woman who was cited last week with failing to keep her dog on a leash and failing to have a valid Cook County rabies tag after the animal bit a 72-year-old man, police said Tuesday.

Wheeling Police Cmdr. John Teevans said the pit bull was impounded because its owner, Deangela Bamberg, failed to have the dog vaccinated against rabies within 24 hours of a biting incident.

Bamberg also was given new citations for failing to take the dog to a veterinarian for observation and for harboring a dangerous animal, Teevans said.

Police said the dog knocked over the man, who has multiple sclerosis, as he was leaving a barbershop June 21 in the 200 block of East Dundee Road. The man told police that the dog bit him twice.

NEW YORK -- Bird-lover Richard DeSantis of West Islip on Long Island is a clever fellow. Being, like most bird advocates, an inveterate cat-hater, he thought that he had come up with a foolproof method of ridding his neighborhood of cats.

His modus operandi was every bit as deadly as it was ingenious. He would lure his neighbors' unsuspecting felines into his yard with baited humane traps, capture them, and then turn them over to the Town of Islip Animal Shelter which would promptly exterminate them for him. 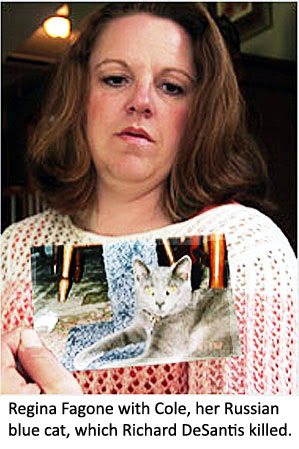 Although it is not known exactly how many victims this fifty-seven-year-old serial cat killer has claimed, it is known for certain that he is responsible for the deaths of at least four cats and he is strongly suspected in the demise of countless others.

The mysterious disappearance of Coal, a four-year-old purebred Russian Blue cat with a sunken left eye, from the home of DeSantis' next door neighbors, Regina and Jesse Fagone, on April 2nd set in motion a series of events that ultimately led to the bird-lover being unmasked as a cat murderer.

The couple looked high and low for their beloved cat and even visited the shelter twice without any luck. After two days of fruitless searching, the shelter finally came clean and admitted that it had exterminated their cat.

Immediately suspecting DeSantis, the Fagones filed a Freedom of Information Act (FOIA) request with the town of West Islip and the shelter was forced to divulge that it was indeed DeSantis who had trapped and surrendered their cat so that it could be exterminated.

DeSantis was subsequently arrested and charged with criminal mischief, falsifying records, possession of stolen property, making a false statement, and cruelty to animals.

He pleaded not guilty at his arraignment on June 13th in a Riverhead court and was released on his own recognizance. He is due back in court on July 31st and, although he could face up to four years in the stir if convicted on all counts, he will probably get off, like most cat killers, with a slap-on-the-wrist fine.

Although DeSantis' ambulance-chasing attorney, Eric N. Naiburg, admitted to The New York Times on June 14th that his client had trapped the cat, he insisted that he had done "absolutely nothing wrong" and that the charges against him were "ridiculous." 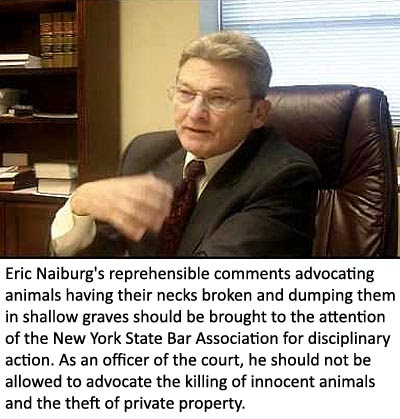 He furthermore attempted to defend DeSantis' murderous conduct by arguing that Coal had been harassing some birds that his client kept caged in his backyard. Since the cat was not wearing either a collar or a tag, Naiburg insists that DeSantis was unaware that it belonged to the Fagones and instead thought that it was a feral cat.

Naiburg further stated that since his client is a licensed hunter he has a right to trap any cat threatening his birds. Naiburg concluded his legal leger de main by ridiculously blaming the shelter and the Fagones for Coal's death.

DESANTIS KILLED OTHER CATS THIS WAY

The Fagones immediately suspected DeSantis from the outset because he had used this same tactic in order to get rid of two more of their cats.

Through a previous FOIA request, they had earned that he had been responsible for trapping and handing over to the shelter for extermination Corky, a tomcat, and Grady, a female, back in December of 1998.

Unfortunately, they did not press charges at that time. "We didn't do anything," Regina told Newsday on April 17th."I was incredulous that anybody could do anything like that. I didn't really know what to do," she added.

Besides being responsible for the deaths of Coal, Corky, and Grady, it is known that DeSantis also trapped and surrendered to the shelter an unnamed black and white cat on March 21st of this year.

He is also suspected in the disappearance of a fourth cat from the Fagone household back in 2002. Plus, Tom Blaser, a relative who lives across the street from the Fagones, suspects that DeSantis was responsible for the 1998 Christmas Eve pellet gun murder of his daughter's cat, Kelly. 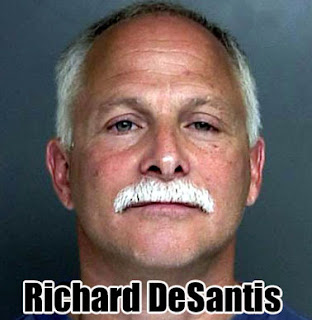 Since DeSantis is not only a trained killer but a very devious individual as well, the extent of his carnage will probably never be known. It is known, however, that several other neighbors have had cats to mysteriously disappear without a trace over the past few years.

"Look up and down the street and we're the only family left on the block with cats," Jesse Fagone, who still owns two cats, told The New York Times.

Compounding matters further is the petit fait that DeSantis is not only a serial cat killer but that he also revels in his wickedness.

For instance, he began taunting the Fagones as soon as he was released after his arrest in April. "He gets out of the car and he yells, 'Here, kitty, kitty, kitty,'" Jesse told the New York Daily News on April 17th. "This guy is out of control. That's psychotic behavior."

Coal's murder has also had a traumatic effect upon the Fagones' two young children, Samantha, 13, and Nicholas, 12. "My kids are being tormented by this guy," Jesse told Newsday in the article cited above. "How do you kill a child's pet and then torment them (sic) a week later?" He is also quoted by the New York Daily News as stating, "Every time they hear the screen door slam, they jump and start searching for the other cats because they think this guy is going to strike again."

This case raises several disturbing issues. First of all, this world is chock-full of inveterate cat-haters who will go to almost any extreme in order to do harm to the feline species. The worst of this sorry lot are bird-lovers and wildlife proponents. These individuals and groups are not only fascists but they are also extremely dangerous. They do not have any morals or integrity and they will kill every cat that they can get in their clutches.

It is high time that cat-lovers woke up to this fact and confronted these monsters. Since they are too morally warped and intellectually dishonest to be reasoned with, their anti-cat propaganda must be exposed for what it is and they must be severely punished for their physical attacks on cats. 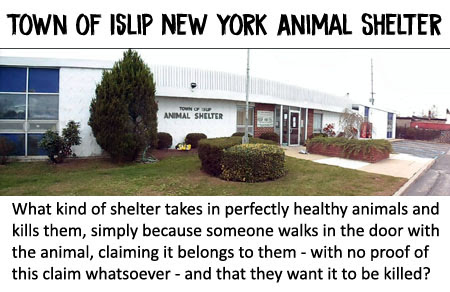 A serial cat killer like DeSantis is not fit to go on living. He deserves the gallows or, at the very least, life imprisonment. If he is not either permanently locked up or executed it is a foregone conclusion that he will continue to kill cats. Low-life scum like him never change.

The conduct of the personnel at the Town of Islip Animal Shelter is almost as despicable as that of DeSantis and the facility should accordingly be shuttered. The hurried exterminations of Coal, Corky, and Grady make a persuasive argument in favor of an immediate abolition of pet genocide.

Moreover, the staff is quite obviously both bloodthirsty and incompetent and this is proven by the fact that they not only exterminated Coal within two days of his arrival but also by their failure to match up the cat with his owners despite the Fagones having visited the facility twice during the interim.

It strains credulity that the shelter did not know what this monster was up to since he had dumped numerous other cats at the facility in the recent past. Why did not someone ask him where he was getting all these cats AND WHY HE WANTED THEM DEAD SO BADLY?

Besides, there are usually laws in place which mandate that shelters hold domestic cats for at least a week before killing them.

Why weren't these procedures followed at the West Islip shelter, especially since the cats weren't micro-chipped under his name and he could not produce any paperwork (CFA registration, vet records, city registration records, etc.) proving the cats even belonged to him?

Prosecutors on Long Island should subpoena the shelter's records in an effort to determine just how many cats DeSantis has trapped and dumped there in the past.

The Fagones and other residents of the neighborhood should demand that this be done and any prosecutor unwilling to go the extra mile in order to uncover the full extent of DeSantis' devilry should be immediately removed from office. Regardless of whatever the outcome of the upcoming criminal proceedings, the Fagones should file civil suits against both DeSantis and the West Islip Animal Shelter.

Jesse Fagone remembers Coal as a unique, outgoing, and playful cat who "danced around" and liked to snuggle up with Nicholas.

Sadly, Coal will not be doing any more dancing or snuggling; nor will he ever see even his fifth birthday. It is too late for him now but it is not too late to bring DeSantis and the shelter to justice and in doing so to save the lives of countless other cats.

ALABAMA -- A west Alabama man who was allegedly caught having sex with RAPING a baby horse, which died a few days later, pleaded not guilty to misdemeanor animal cruelty.

Authorities said four women saw the man having sex with a six-week-old horse in a field in early May and tried to stop him. Lewis refused and was gone when they came back with another man.

Alabama is among 15 states that lack a law expressly prohibiting sex with animals, according to Stephanie Bell, a caseworker with People for the Ethical Treatment of Animals.

Alabama law does make it a crime to kill or hurt an animal that belongs to someone else, or to subject an animal to cruel mistreatment. But District Attorney Greg Griggers said the case is questionable because the pony was not examined for injuries after its death.

If convicted, Lewis could be sentenced to a six month jail term and fined up to one-thousand dollars. Dixon Mill is located in south Marengo County.