Orphaned baby owl rescued, will get care... and plenty of mice

SOUTH CAROLINA -- For about two months, Chuck Lister and his family have had a regular guest at their Anderson home — a female owl.

She came to their back yard for several weeks before she ever built a nest in the water oak across the street at Boulevard Baptist Church. She laid three eggs, and three weeks ago, hatched three babies.

The Lister family got used to keeping watch on the mama and her brown-eyed young, called barred owls because of the faint stripes across their chests. 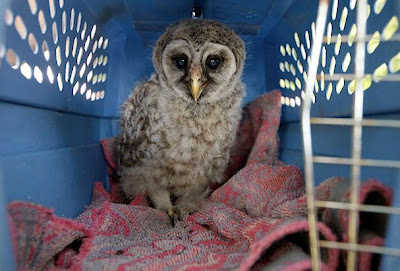 Lister said just about anybody from his house could step outside, call, “Babies, babies, babies” and see the mother within just a few minutes.

On Tuesday, the mother owl was hit by a car and killed.

Chuck Lister immediately went about looking for a rescuer for the tiny orphans across the street. His call was answered by Linda and Mike Hoskinson of Piedmont, licensed rehabilitators who have never turned away any kind of injured or abandoned wildlife. 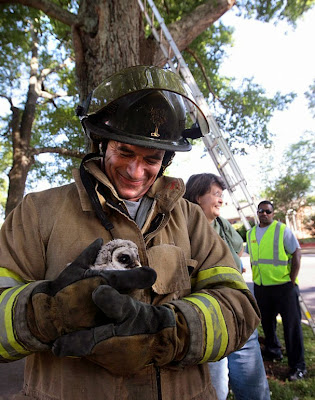 The Hoskinsons are part of Wildlife Rehab of Greenville, a small group of Upstate rescuers. Linda Hoskinson has been doing wildlife rehabilitation for three decades, and her husband “married into it” seven years ago. The couple care for about 250 animals every year.

“Some people don’t understand it, but we live it,” Mike Hoskinson said. “It wasn’t that long ago that we drove a hundred miles to get a groundhog.” 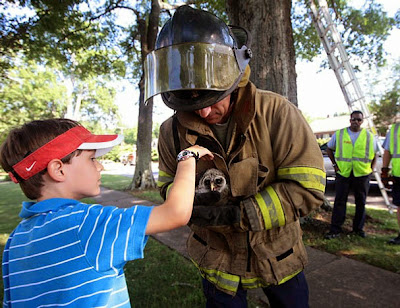 The Hoskinsons waited at the base of the tree Wednesday for Anderson firefighter Billy McCullough to rescue one of the owls in the oak, cradle it, and bring it down a ladder unscathed.

It was the second rescue in two days; the Hoskinsons got one of the babies on Tuesday and are still hoping to find the third.

“They are just little miracles,” Linda Hoskinson said. “You never, ever get tired of seeing that.”

Made of hollow bones and built for flight, the baby owl rescued Wednesday weighed a little less than a pound. It looked like a ball of brown and gray feathers with eyes and a beak.

The baby owl made a click-click-click sound when it was placed inside a cat carrier, but soon, it calmed down and was quiet. 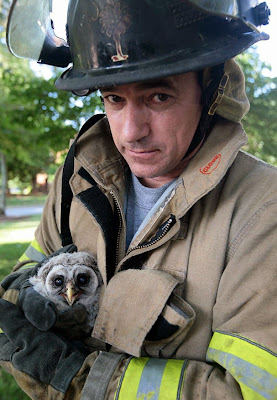 The two baby owls will stay with the Hoskinsons until Saturday or so, when they will get a ride from another rescuer to the Carolina Raptor Center in Huntersville, near Charlotte, N.C.

In the meantime, the owls will sleep alongside some rescued squirrels and six baby skunks found under a house in Columbia.

And they will have a steady diet of mice and rabbits.

“I have to let them go, or I will spoil them too much and they will not learn how to fend for themselves,” Linda Hoskinson said. “But in the meantime, they will be doted on.” 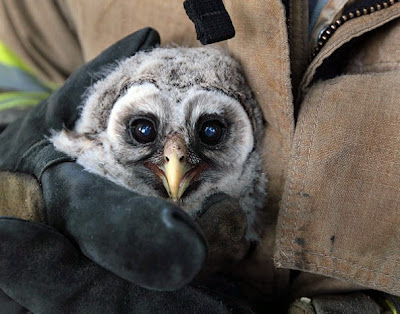 The family that has watched the baby owls grow plans to do some of that doting, Chuck Lister said.

“We’ll see you as soon as we can,” he called out to the Hoskinsons. “We’re not ready to let go of our babies just yet.”