A 74-year-old man was severely mauled by two dogs belonging to his neighbor near Hawthorne on Friday morning. 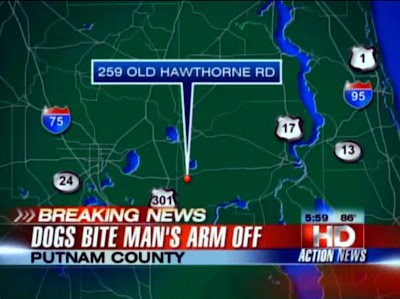 Roy McSweeney, of 259 Old Hawthorne Road in Putnam County, was rushed to Shands at the University of Florida for extensive surgery including an attempt to save one of his arms. The other arm had been completely ripped off by the dogs, said Putnam County Sheriff's Capt. Johnny Greenwood.

"He was in his yard doing yard work when the dogs jumped over the fence and attacked him," Greenwood said, adding that the fence was thin wire. "An investigator said the surgery would take six to eight hours."
﻿

Greenwood said McSweeney's right arm was ripped off by the dogs. His left arm was partially removed and his face was injured, Greenwood added.

The dogs were owned by Deanna Blitch, of 261 Old Hawthorne Road, and were described as pit bulls or pit mixes by Greenwood, a neighbor and Blitch's brother, Dan Dickerson.


Blitch said she was advised by her attorney not to comment. Dickerson said he and Blitch both are worried about McSweeney.

"Our concern is with Mr. McSweeney. He is a friend of our family. We've known him for years — he's always lived in this general area and in that house for maybe a year," Dickerson said. "I heard there was a brouhaha over here. I know he is in bad shape."

Deputies and rescue personnel responded to the attack at 11 a.m. and investigators determined the dogs belonged to Blitch, Greenwood said.

She turned the dogs over to authorities and the case remains under investigation.

Greenwood said the dogs were humanely euthanized and will be tested for rabies.

Court records show that Blitch is the defendant in a civil suit in Putnam County regarding negligence and premises liability.


Both Greenwood and a neighbor said they believe Blitch has been sued over a previous dog bite. The man suing Blitch could not be reached by The Sun to learn if his case involves a bite.

The neighbor, who did not want to be identified, said Blitch's dogs frequently left the property, once ending up at her front door.

"There's a constant problem with the dogs," she said. "They are always running the street. They came down here and were growling and barking at the door. We have pit bulls, but she is the kind of person who gives them a bad name."


Dickerson said that as far as he knew, Blitch kept the dogs in a kennel in the back yard.