"Steve Duin: With a homeless pit bull in the mix, you know this does not end well"

OREGON -- Life sucks, best Mary Margaret Mackrill can tell, which is why she was cutting herself at 14.  Her parents had separated by then, she says, a member of her extended family was dead by suicide, and she was rattling around in foster care.  Her mother, she was convinced, "only wanted my little brother."

She coughs into the dark sleeve of her sweatshirt, a cough as forlorn as the old men camped around us inside the McDonald's at 18th and West Burnside.  Mackrill ignores the leers at her red hair.  She can deal with most of the crap that claws at her throat. 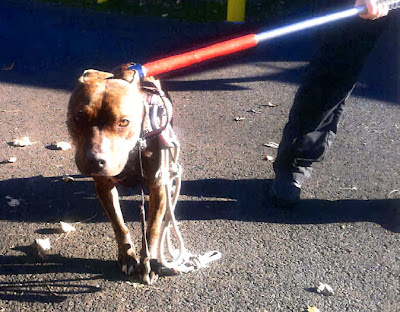 But they took her dog.

Dewbie had it coming.  Mackrill, 21, knows that:  "Dewbie can do some damage.  He's over-protective.  He launches too quickly."

[In the official police report, they have the dog's name spelled DOOBIE. As in marijuana joint. Do you really think this 21 year-old homeless chick spells the pit bull's name DEWBIE?]

He's spooked by hoodies, a lousy attitude down under the Burnside Bridge, but, no, Mackrill doesn't know why her brindle pit-bull mix lunged at a 47-year-old woman just before Thanksgiving at the Southeast 122nd MAX stop.

[Does it really matter if anyone knows WHY this pit bull decided to attack another person? There is no why. It attacks just as easily as it breathes in and out.]

Mackrill had a harness and rope on Dewbie, not the required muzzle, and the pit bull drew blood and a scream to wake the dead.  Mackrill knew what that meant -- the dog bit two people in October -- so she and her boyfriend fled.  "I panicked," she says.

Portland police probably needed 15 minutes to track them down.  Mackrill only became "emotionally distraught," as Multnomah County animal-control officer Katrina Garvin writes in the incident report, when the cops first refused to open the squad-car door and let her hug the dog goodbye.

"I broke down.  I finally convinced her to let me say goodbye," Mackrill says.  "He just sat there with his nose down.  I think he kind of knew some trouble was about."

Without a muzzle and a serious attitude check, the pit bull -- like Mary Mackrill -- has no business living on the Portland streets. But while the dog needs open spaces, Mackrill needs the drop-in centers and homeless services downtown.

Housing? Another Catch-22. "The places I can stay are dwindling to almost nowhere," she says.  "There haven't been many places that will accept his breed, let alone his history."

Mackrill knows the feeling.  Oregon's Department of Human Services moved her 21 times before she turned 18, she says.  Small wonder her hand is so tight on the makeshift leash.  "He's the only one out of everyone who has unconditional loyalty."

Mackrill is not without her defenders.  When Dewbie was impounded by Multnomah County Animal Services in November, Gail O'Connell-Babcock, a long-time critic of the county's treatment of dogs, and her husband, attorney Robert Babcock, decided to provide legal help.

O'Connell-Babcock first posted fliers under the bridges, asking Mackrill to contact her.  She then paid the $125 fee required by the county, $25 to appeal Mackrill's "surrender" of the dog and $100 for temporary housing, fees the county refuses to waive for the homeless.

[I wonder if O'Connell-Babcock paid the medical bills for the innocent victims? She and her ambulance chasing husband say they spend thousands defending owners of aggressive dogs, but does she have any sympathy for the countless victims?]


She is afraid for Mackrill.  "She doesn't have a hard shell around her yet," O'Connell-Babcock says.  "She's soft prey.  It's easy for someone on the streets to prey on her, and for the county to prey on her."

Mackrill did not attend Wednesday's hearing on Dewbie at the county's Yeon Building on Southeast 190th.  Babcock insists the county did not give Mackrill the required 10-day written notice, and notes she didn't stand a prayer of keeping the dog, anyway, because she can't afford housing, much less a trainer or a fenced-in yard.

After Mackrill's claim to her dog was dismissed, Babcock filed an appeal.  He was promptly notified by the county's attorney, David Blankfield, that if Mackrill doesn't fork over another $500 boarding deposit by Feb. 24, "the dog will be deemed surrendered."

Everyone knows this will not end well. The county considers the pit bull dangerously aggressive and Mackrill incapable of reining him in.  "You have a dog with a proven history of biting," said county spokesperson Hank Stern. "While I'm empathetic with someone who wants to keep their pet, at some point they have to be accountable." 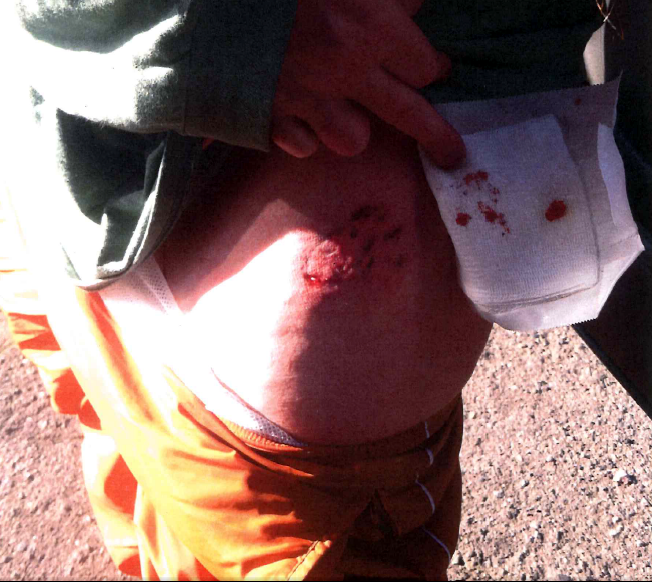 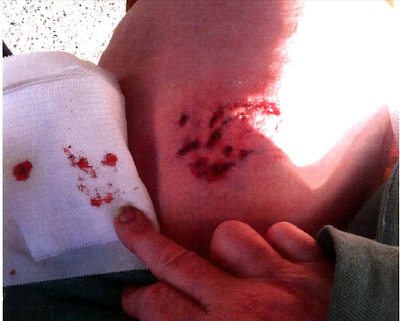 Babcock agrees:  "Clearly, the dog has some issues ... and she has issues in terms of her ability to control and deal with the dog."  But he argues, as he and O'Connell-Babcock long have, that the county is unwilling to consider alternative treatment plans that can save a dog's life.

Especially when that dog is as homeless as its owner.  "When you're dealing with our most vulnerable population, and those most attached to their animals, you have to take extra steps to achieve basic fairness and justice," Babcock said.

When I last saw Mackrill, she was heading toward the river to meet with her case worker.  She insisted she didn't need a ride, then carried that ugly cough outside.  So did I.

Read the police report. You'll see that Mackrill is the epitome of the slacker "choose to be homeless" types which are welcomed with open arm by the liberal hippies of Portland.