Girl and her family get fake service animal badge for lizard and demand to take it wherever they go. Ever heard of Salmonella?

TEXAS -- Megan Curran is bright, sweet and funny. She enjoys reading, writing short fiction and playing video games. She’s the product of a family with strong military ties — both her parents served in the Air Force, as does her oldest brother.

But severe high school bullying left her dealing with depression and anxiety, battling with thoughts of self-harm. She graduated from high school early and withdrew from society, her anxiety crippling her ability to spend time among people or feel safe outside her home. 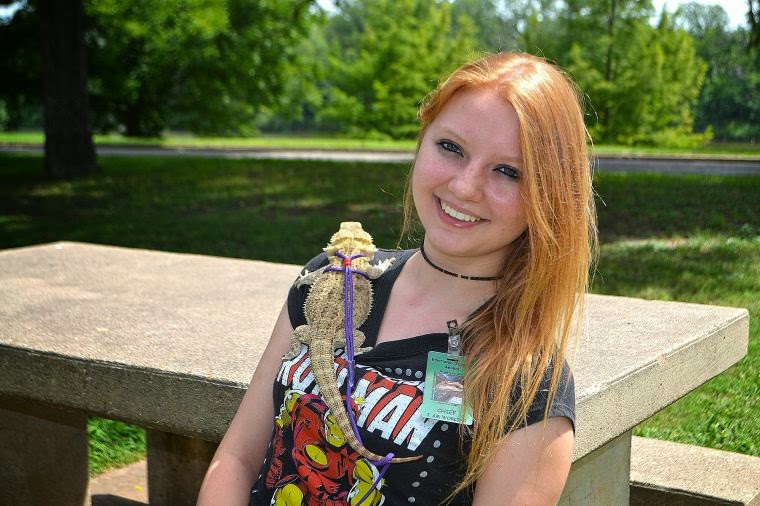 When help came to Megan it arrived in an unusual package: undersized, missing two toes and determined to grab her attention. That help is Chief, a bearded dragon and Megan’s emotional support animal.

From an early age Megan displayed an affinity for reptiles. As a child she rescued an injured 6-foot-long snake from a cat and released it to safety in a nearby ditch. She felt no fear.

At 16 she decided she wanted a pet bearded dragon of her own. Though her parents weren’t sold on the idea, Megan — armed with research and tenacity — wore them down.

“My dad said, ‘If you stop talking about one I might let you have it in a few months.’ After that, there was no going back,” Megan said with a laugh. “I think he got Chief just to shut me up.”

When her father, Troy, took her to look at bearded dragons, a large, brightly colored orange lizard caught her eye. But when the Waco teen asked to hold that one, it was another lizard that came running.

“As the sales lady reached into the tank a smaller, darker one rushed up her arm and jumped into my hands,” Megan said. “I hadn’t considered that one because she was missing two toes on her back foot. I was hesitant to pick her, but she picked me.”

The transition from pet to emotional support animal started as a trip to PetSmart. Because animals are welcome in the store, Megan felt comfortable taking her baby “Beardie” — as they are nicknamed — to the store.

“She was about 2 months old or so, and 6 inches in length. I wanted to socialize her so my friends could handle her,” she said. 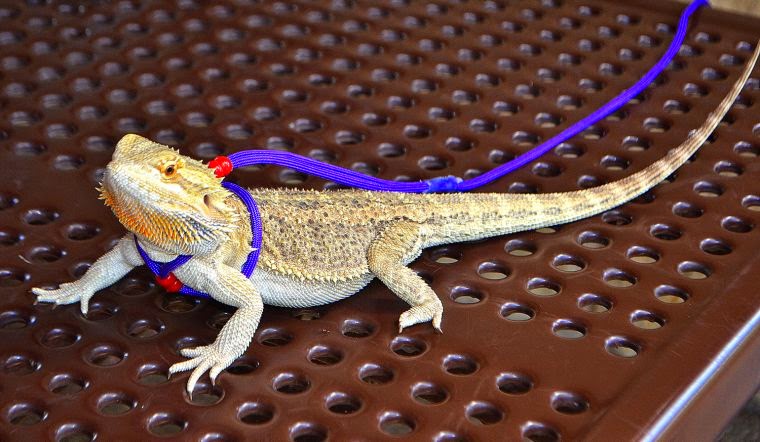 Chief, however, had other plans. “She fell asleep in my shirt and nobody saw her. I noticed I was able to communicate with other people without problems. When I started to feel anxiety I put my hand over her and it calmed me down.”

The difference was notable, and Megan and her father decided to try out other stores with Chief.

“I was able to go in, do what I needed to do and get out without a panic attack,” Megan said. “I was able to talk to men, which was huge, and when I got home I didn’t need to hide.”

“She was less in her shell, less depressed,” Colleen said. “She came out more and seemed more self-assured, even with us. It made a big difference in Megan. A really big difference.”

The key, according to Megan, is that Chief gives her a focus point.

Chief’s ability to stabilize Megan made her a good candidate to be an emotional support animal. For nearly six months Megan took Chief everywhere, seeing how she’d function in different settings.

After a manager at a grocery store approached her about having the lizard with her, the family decided to file paperwork and have Chief listed with the National Service Animal Registry. 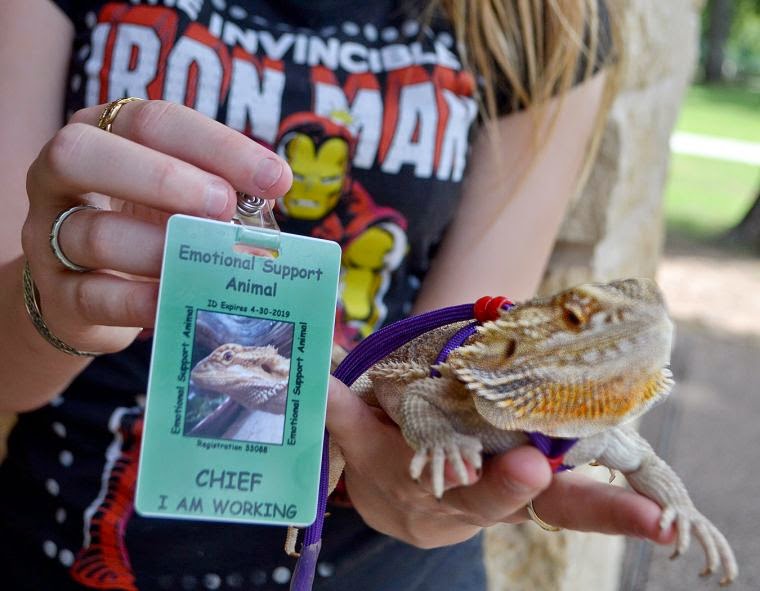 Chief, however, is not considered a service animal by the Americans with Disabilities Act. The act limits that distinction to dogs and in certain cases, miniature horses that do activities for a disabled person.

Chief is 9 months old and 17 inches long (eventually, she will grow to be somewhere in the area of 2 feet — most of which is tail). She’s too big to ride in Megan’s shirt or act as a hidden ball of courage, as Megan put it.

Now she perches on Megan’s shoulder, her head often settled against Megan’s neck. Despite her size, people rarely notice Chief when she and Megan are out, she said. Her parents initially worried about people’s reactions.

[So they know that the ADA said no way Jose to this lizard being a service animal so they purposefully and intentionally continue to bring the lizard into public places with this fake service animal badge. They need to be arrested.]

“My dad especially, because he didn’t want anyone negatively influencing me,” Megan said. “He was worried I’d get called a freak, but that never happened.”

Response is overwhelmingly positive, she said. Chief’s calm, friendly disposition makes her a natural with adults and children alike.

Interestingly, girls are far more willing to talk to and handle Chief, she said.

“It’s girls way over guys,” Megan said. “Only a couple of boys have approached me. Girls will ask to take selfies with her. Chief really likes people. She gets excited to see kids. She dances in place when they walk by.”

Megan’s mother refers to Chief as the “Reptile Ambassador.”

As a young lizard, Chief’s care included $400 worth of crickets a month. As she’s grown, that’s dwindled down to two to three containers of worms a month, as well as $4 in collared greens.

“There was some trepidation at first,” Mom Colleen said. “(I thought) I’m going to have to nag her to feed and care for it. I didn’t have to do that at all. Besides,” she added with a laugh, “It beats changing a litter box.” 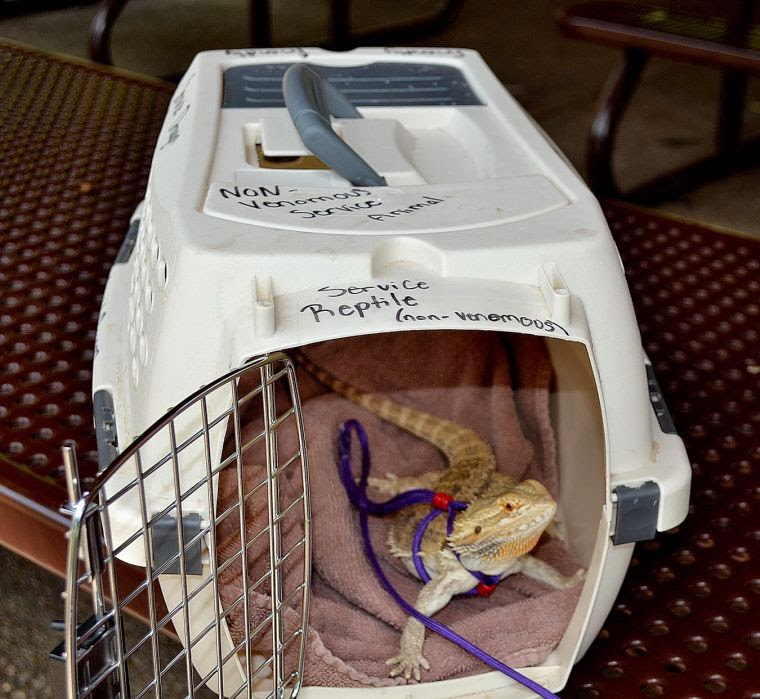 Megan can run errands with greater ease, talk to people, and make new friends. She even took Chief to see the movie “How to Train Your Dragon 2.” Chief has inspired some of Megan’s friends to pursue a bearded dragon as an emotional support animal.

In the fall, Megan plans to start college at McLennan Community College. Though she had a difficult time in high school, Megan feels confident that she can tackle school again now that she has chief at her side — or rather, on her shoulder.

Her intended field of study?

[Is this annoying to you that this family is so blatant and proud of breaking the law? It's these types who get fake service dog jackets and badges on aggressive dogs and demand to take these dogs everywhere. When she lets the lizard climb on the shopping cart, when she pets it and touches something in the store, she can transfer Salmonella and other germs to you and your kids. I don't know that this lizard is a danger to society but this family knows what they're doing. They know that companies are so terrified of being sued for discrimination of a disabled person that they know she can flash this stupid "emotional support" badge and walk right in with that damn lizard.]